What we learned: Medina Spirit deserves a pass for Preakness 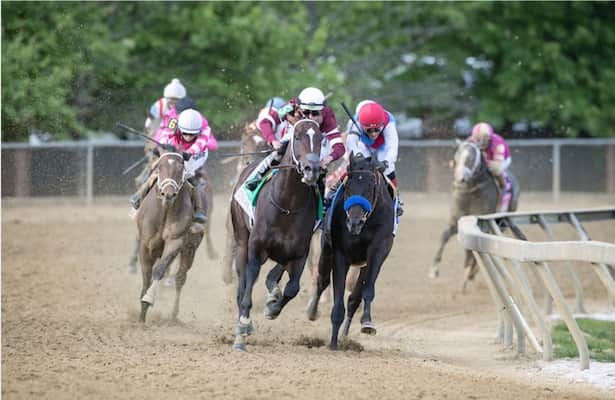 On the surface, Medina Spirit set the pace in the 146th Preakness Stakes and then gave up in the stretch run on his way to a tired third-place finish. The loss is not as disappointing as his lack of fight in the stretch against Midnight Bourbon, but there are few notes about Medina Spirit’s trip to point out before dismissing the little horse as a top colt.

Medina Spirit secured lead out of the gate under minor urging. John Velazquez had to establish the horse’s preferred position.

Once he reached front, Midnight Bourbon never left him alone.

For an uncontested lead to occur, the pacesetter usually holds a one or two-length cushion through the first half mile. The space is important in allowing breathing room. From reading the results chart, Medina Spirit never had more than half a length of cushion throughout his lead.

Pacesetters face a difficult time up front when taking challengers from both sides. Remember when Smarty Jones made the lead in the 2004 Belmont Stakes? Eddington and Rock Hard Ten initially did not leave him alone on both sides. The pace scenario took its toll on Smarty Jones and set up the race for Birdstone late.

If nothing else, the Preakness fractions revealed Medina Spirit as going too fast, likely because of the pressure from Midnight Bourbon and France Go de Ina. After the opening quarter in 23.77, Medina Spirit then traveled the half-mile in 46.93 and six furlongs in 1:10.93. According to TimeformUS, the latter two fractions are coded red.

This time it was clear Medina Spirit would head into the top of the stretch in deep waters. Midnight Bourbon had eliminated the initial half-length space and met his foe in the eye. He needed one more push.

Unfortunately for Midnight Bourbon, those middle fractions took a toll on him too. As Midnight Bourbon and Medina Spirit fought each other for the lead on the far turn, a new challenger found his way into the mix.

Rombauer came rolling up a few lengths behind the dueling pair. When Midnight Bourbon finally started to move past Medina Spirit in the stretch, Rombauer went by Midnight Bourbon with little problem. In fact, Rombauer built on his lead to cross the wire ahead by 3 1/2 lengths.

Rombauer finished the race in 1:53.62, resulting in a career best 122 TimeformUS Speed Figure and 102 Beyer Speed Figure. This is a situation where the closer took advantage of the pace scenario. For handicappers who concluded the pace would hinder the speed types up front, many of them were rewarded with Rombauer at 11-1.

Rombauer had a spot as one of the “top 3 Preakness horses” in one of the early Preakness posts on this blog, but he was left off the top slot in the final analysis.

Can Rombauer continue on as a top horse? Right now, it is hard to tell. From a handicapping standpoint, he seems like a bet-against next time in a race with a more moderate pace. Essential Quality and Highly Motivated easily put away Rombauer only a little more than a month ago, although horses can improve.

Midnight Bourbon looks the part of a top horse with his tactical speed and great physical appearance. The latter factor likely resulted in him becoming underlaid during live wagering, as he opened as the favorite over Medina Spirit before drifting slightly to 3-1 at post time. Given all the buzz about him on social media, the low odds came as no surprise.

To establish himself as a top 3-year-old, Midnight Bourbon needs to finish off the job and win again. After winning the Lecomte Stakes (G3) in January on the lead, he has kept finishing second or third in races other than the Kentucky Derby.

Now back to Medina Spirit and the troubles of trainer Bob Baffert.

Yes, the loss is disappointing. For the reasons listed above, though, Medina Spirit did not face an easy trip, even if he secured his preferred front position. At the end, he was third in the Preakness after a fast pace and multiple challengers.

In seven lifetime starts, Medina Spirit always has hit the trifecta. He was first and third in the first two legs of the Triple Crown. Only good horses have that kind of record.

As for the failed Derby drug test, Betamethasone is not a performance enhancer. It is used to treat the skin. Are Medina Spirit and other Baffert horses gaining an undetectable edge involving something other other than skin care? As handicappers, it is impossible for any of us to know.

All bettors can do is move up Baffert horses a little bit more in consideration, especially if the race any major speed types. Whether his horses receive any “help” or not, Baffert knows how to give his speed horses the best chance to win by securing control of the lead.

In this case, setting the pace did not work out for Medina Spirit. For now, he still remains the Kentucky Derby champion and that stands until and unless officials say otherwise.

Medina Spirit remains a talented horse with a consistent record. He might benefit from a slight break, as he already had four prep races before the start of the Triple Crown series. If Medina Spirit rests a bit and returns in a summer race such as the Haskell Stakes (G1), expect him to fire a good race and either win or hit the board once again.