What we learned: Maximum Security withstands the pressure 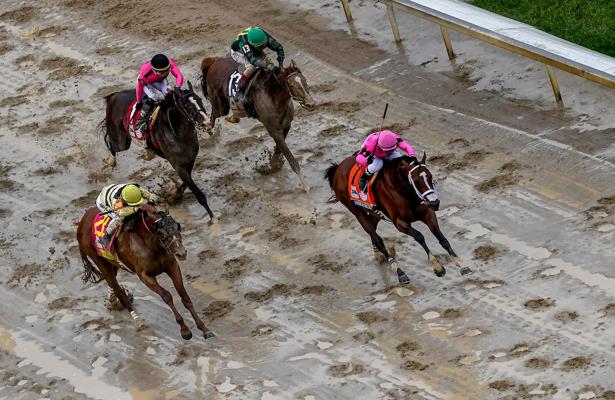 As the dust settles (or, at least, tries to), it is time to discuss what happened from a handicapping standpoint in the Kentucky Derby. There are two important takeaways.

One: Maximum Security proved himself a tough horse when allowed the lead, even in a faster pace scenario. And two: Country House hung badly in the stretch again. The disqualification is irrelevant to those points.

Coming into the race, the big mystery surrounding Maximum Security was pace. The Jason Servis-trained colt walked on a slow pace in his wire-to-wire Florida Derby win, calling into question whether he could duplicate that effort going faster in the Kentucky Derby. Further complicating this for handicapper is that he worked slowly up to the race.

Maximum Security set a more reasonable pace Saturday, with the opening quarter in 22.31 seconds and half-mile in 46.62. TimeformUS marked the half-mile fraction in red.

He also faced some pressure from Long Range Toddy and Bodexpress going into the first turn, although those two backed off a bit on the far side. War of Will wanted to go while boxed on the rail, but there was no room.

On the far turn, Maximum Security then held off the challenges from War of Will and Code of Honor, although in an unfair manner that led to his disqualification. But Country House suffered little to no interference, and Maximum Security held him at bay.

At the end of the day, Maximum Security did all the dirty work and still won, and that is something to note going forward. Can he rate behind a horse or two and still kick in? Considering jockeys are usually reluctant to send their mounts, Maximum Security may not need to answer the question.

Meanwhile, Country House still cannot close the deal, even if he won the Kentucky Derby. He hung in the Risen Star Stakes (G2), Louisiana Derby (G2) and Arkansas Derby (G1) after repeatedly threatening on the turn.

In this case, he had the entire stretch to pass Maximum Security and spun his wheels. He still deserved the Kentucky Derby win because of the interference Maximum Security caused to War of Will, but Country House is a great play against moving forward in the Triple Crown series.

What's the problem with Instagrand?

Instagrand folded back to eighth as the favorite after showing some speed in the Pat Day Mile (G3). It was a disappointing end to his path to Kentucky Derby day at Churchill Downs.

The Into Mischief colt broke fine and did not appear rank in the opening half. He then settled around fourth without pressing the leader Mr. Money Bags, and that is possibly one mistake. A speed horse like Instagrand needs to lead or stay up close, and then clear as much as possible on the turn.

The same logic holds true for Hidden Scroll, who finished third earlier in the card in an optional claimer. Because some speed horses will offer nothing in the stretch, they need to create as wide of a gap as possible on the turn.

If Instagrand ran a flat race without any physical excuse, then a more aggressive jockey such as Mike Smith might help him utilize his speed.

It is also possible Instagrand did not progress properly from his 2-year-old season.

Mr. Money thrives at one turn

Mr. Money won the Pat Day Mile after some unsuccessful attempts on the Derby trail. If there was one constant pattern in his form, he repeatedly faded after putting himself in a good position, almost like Country House. Obviously, the difference is that Mr. Money possessed more speed than him.

Cutting back to a one-turn mile seemed to help Mr. Money, though, as he looked miles sharper than he did in the Risen Star and Louisiana Derby. He stalked the pace closely, made a bold move on the turn and then finally kicked in late.

Yet, Mr. Money is listed as a possible for the Preakness Stakes? This horse may be suited for races such as the Woody Stephens (G2) or Dwyer Stakes (G3).

If he shows up at Pimlico, then limit him to underneath spots, or ignore.

In the Humana Distaff (G1), Mia Mischief finally woke up with a big win. In her prior start, she had lost at 2-5 in the Carousel Stakes at Oaklawn Park, but she rebounded here with a nice victory over a quality field.

Mia Mischief held off Marley’s Freedom by almost two lengths, with another four back to Amy’s Challenge. TimeformUS also gave Mia Mischief a whopping 125 figure, validating the quality of her win for trainer Steve Asmussen.

Marley’s Freedom ran OK for second, but she did not run like a 4-5 shot at all. With those kind of odds, the horse is supposed to win easily.

Amy’s Challenge does not want seven furlongs, even if she ran well at Keeneland in the Madison Stakes (G1). Wait until she cuts back to six.

My pick, Talk Veuve to Me, was absolutely lifeless in this race and finished last by 21 3/4 lengths.

At Oaklawn Park, who decided the Oaklawn Invitational should run roughly 33 minutes before the Kentucky Derby? What an odd choice.

If they ran the Oaklawn Invitational earlier in the card, more bettors could focus on the race and turn their attention toward Churchill Downs afterward. But that was not the case, and few people paid attention.

Laughing Fox won by a neck, reaffirming the potential bettors saw in him in earlier Derby prep races. He too could head to the Preakness.