What we learned: Malathaat not special, but still best in division 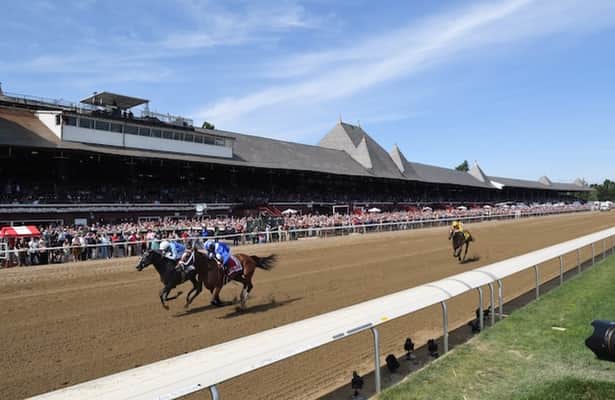 Malathaat lost the first race of her career in the Coaching Club American Oaks (G1) at Saratoga Saturday. But despite finishing second, Malathaat ran the best race of the four fillies, while the winner Maracuja fell into luck early and took advantage.

With that said, Malathaat shows once again that she not a special filly, at least not yet. She is a talented and consistent filly who leads the division, but at the moment, that is all.

Now to praise Malathaat's effort. In the CCA Oaks, Malathaat took multiple waves of pressure as the pacesetter and still found enough to keep fighting in the lane with a chance to win. She ran the hardest overall.

At first, Maracuja took the role of pressing Malathaat.

With Maracuja nearby, Malathaat led the field through an opening quarter in 23.38.

When Clairiere made an early move to join the pair, Maracuja under jockey Ricardo Santana Jr. took back and let Clairiere take up the dirty work running next to Malathaat. With Clairiere in an unfamiliar role pressing the leader, Malathaat hit the half-mile in 47.13. Fractions of 23.38 and 47.13 are moderately fast at Saratoga for nine furlongs, if not outright fast. Yet Malathaat was handling the pacesetter role well.

On the far turn, Clairiere tried to ramp up the pressure on Malathaat. In the meantime, Maracuja set up her stretch run by smoothly tipping outside the two.

At this point, anyone could see Malathaat and Clairiere were in deep waters. The two of them had exchanged blows ever since Clairiere made the early move, and now Maracuja held the preferable outside rallying position and took aim at the front.

Clairiere threw in the towel, but Malathaat kept fighting Maracuja down to the wire. Maracuja had the benefit of sitting behind Malathaat and Clairiere, which gave her just enough rest on the backside to prevail in the stretch over Malathaat late. Despite a great effort from Malathaat, Maracuja won by a head over Malathaat in an exciting race.

Yet Malathaat was the best horse in the race. This opinion comes from someone who has been indifferent to Malathaat. Malathaat ran better than Maracuja because she did the most heavy work by taking pressure from Maracuja, Clairiere and Maracuja again late. And as stated above, the fractions were not soft for nine furlongs at Saratoga.

In contrast, Maracuja took advantage of Clairiere’s premature move by allowing her to press Malathaat and basically tee up Maracuja’s final blow in the stretch run.

For the win, Maracuja ran a career high 114 TimeformUS Speed Figure, which is eight points higher than her previous best. As time goes on, different 3-year-olds start to emerge in the top mix, and maybe Maracuja took that step in the CCA Oaks.

But Malathaat remains the best 3-year-old filly in the country – for now. One loss by a small margin does not knock her off the pedestal, especially given the circumstances of the pace scenario. She still won the Ashland Stakes (G1) and Kentucky Oaks in the spring, and one more Grade 1 win might seal her fate as the filly champion in 2021.

At the same time, the reverence for Malathaat as a superstar heading into the CCA Oaks was a little over the top. She barely beat Pass the Champagne and Search Results in her prior starts this year, and now she lost to the seventh-place filly in the Kentucky Oaks. Her speed figures on TimeformUS are only decent and do not go past 120.

Is there not a middle ground between a good filly who can beat her peers most of the time and being a special filly? Right now, Malathaat is not special, but that could change with time as she becomes stronger and takes a step forward off her form.

Clairiere had the misfortune of moving early and pressing Malathaat. If Irad Oritz Jr. did not ask Clairiere to go and Maracuja stuck with the pressing role, then perhaps Clairiere would have tipped out in the stretch and won. Ortiz Jr. wanted to make sure Malathaat did not lead comfortably, and that is respectable in an era where jockeys are too passive.

Even though the plan did not work out, Clairiere remains in the mix of top 3-year-old fillies. Clairiere only needs other horses to take up the dirty work, and a more normal-sized field might give her that scenario.

The last-place finisher Rockpaperscissors lost by 58 1/2 lengths. Oddly, the public bet this filly down to an absurd 8-1 off an allowance win at Indiana Grand.

Rockpaperscissors is a daughter of Distorted Humor out of Rockcide, who is a half-sister to the famous 2003 Kentucky Derby and Preakness Stakes winner Funny Cide. Perhaps Rockpaperscissors eventually can reach this level with more time and development.

Malathaat was the blog choice in the Kentucky Oaks. The CCA Oaks analysis favored Clairiere as the value option, although a straight Malathaat over Maracuja exacta was given as another way to approach the race. It turns out both ways to approach the race did not work out.

In the future, it might be even more difficult to bet Malathaat because most of the public will forgive the loss and still bet this filly down to extremely low odds. Given Malathaat's popularity will not diminish by losing this race, it might make sense to take a shot against her.

At the same time, Malathaat ran a better race than Maracuja and remains the best 3-year-old filly in training, based on ability and accomplishments. Maybe Search Results or another filly eventually takes that top spot, but right now, she is No. 1.