What we learned: La. Derby runners excelled in Kentucky 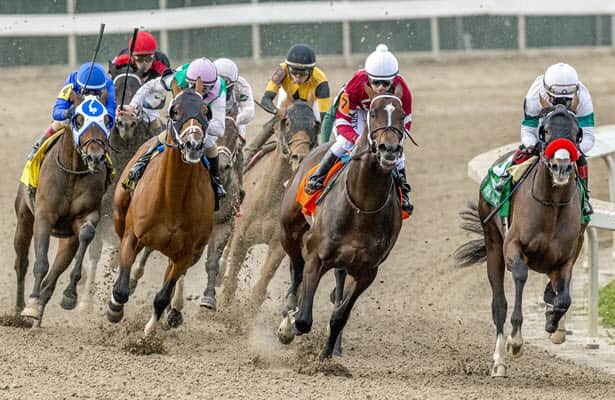 To expand on the thoughts in my Sunday column, one of the most noticeable aspects about the Kentucky Derby results chart is the performance of Louisiana Derby (G2) runners. The four runners from that race took up four of the first six Derby positions, giving that group a strong showing even if the trophy went to Santa Anita-based Medina Spirit.

Despite Country House running a mild fourth in the 2019 edition before winning the Kentucky Derby via disqualification, the Louisiana Derby is not typically considered a strong prep race, nor is the Fair Grounds route to Louisville in general thought of as a quality path to travel.

When the dust settles at the end of the year, though, analysts likely will look back at this Louisiana Derby and label it as productive.

Consider the horses from this group that ran in the Kentucky Derby.

• Mandaloun ran a head-scratching sixth in the Louisiana Derby and then almost won the Kentucky Derby, losing by only a half-length to Medina Spirit. He went from a 104 on TimeformUS to a career high 121 in his runner-up finish at Churchill Downs.

• Hot Rod Charlie won the Louisiana Derby and then fought as part of the four-horse stretch battle in the Kentucky Derby, finishing third behind Medina Spirit and Mandaloun. Even though Hot Rod Charlie lost, his TimeformUS figure went up to 120. Another notable point is that he was a close third to Medina Spirt in the Robert B. Lewis Stakes (G3) and second in the Breeders’ Cup Juvenile to Essential Quality.

• O Besos was a closing third in the Louisiana Derby, losing by only two lengths to Hot Rod Charlie and barely missing the runner-up spot to Midnight Bourbon. In the Kentucky Derby, O Besos came within range of the leaders in fifth. The four horses in front ran away from him, but O Besos’ jockey Marcelino Pedroza made the error of trying to rally on the inside. Most jockeys avoided the rail on the Oaks and Derby cards.

• Midnight Bourbon made use of his speed in the Louisiana Derby to press Hot Rod Charlie before ultimately losing by two lengths in second. He then was bumped at the break in the Kentucky Derby and ran out of the position somewhere in the second half of the field. He still found his best rhythm late to pass enough horses for sixth. Forget about the decrease to 110 on TimeformUS, as it does not reflect the trip.

Mandaloun and Hot Rod Charlie were close to winning. O Besos was arguably capable of running with the top four if he took the middle paths because of the track bias. Midnight Bourbon holds an argument for a better finishing position too, as the bad break made him adapt a closing position.

As for the Louisiana Derby horses who competed elsewhere, they did not fare as well, but there are excuses to consider.

• Proxy ran fourth in the Louisiana Derby, and fourth again in the Lexington Stakes (G2) after making another mild move in the stretch run. However, cutting back in distance probably didn’t help him at Keeneland, nor did the sloppy track. This is the kind of horse who will finish third and fourth many more times in his career without threatening.

• Rightandjust and Run Classic were seventh and eighth in the Louisiana Derby. Both horses are promising runners who needed more time.

One possible reason for the Louisiana Derby improving in stature and results as a prep race is the longer distance.

Because the race runs at 1 3/16 miles now, it gave those four Derby starters a nice foundation for handling 1 1/4 miles at Churchill Downs. In addition, Mandaloun and Midnight Bourbon went through all three of the Fair Grounds prep races, with the Lecomte Stakes (G3) and Risen Star Stakes (G2) run at 1 1/16 miles and 1 1/8 miles.

Critics of the longer Louisiana Derby distance say it dulls the horses’ speed heading into the race. Yet, Mandaloun took a pocket position in third when running in the Kentucky Derby, while Hot Rod Charlie was not far behind in fifth.

As explained, Midnight Bourbon did not join them because of his bad break, which led to him to lagging in 14th at one point. Also, O Besos runs as a natural closer. Given the flow of the race, it is surprising he even found his way to fifth before tiring on the rail.

Whether the Louisiana Derby horses were fast on figures depended on the brand.

The Louisiana Derby speed figures were kind of low on BRIS. Only Hot Rod Charlie made the Top 10 in the category of fastest speed figure from the last race with a 96, which came in eighth. On TimeformUS he appeared a bit stronger with a 117, which put him only one point below Essential Quality and seven points below Rock Your World.

In the future, it is likely best not to emphasize the speed figures from the Louisiana Derby as a handicapper. Because Fair Grounds does not run another 1 3/16-mile race on the card, there is no race for non-figure makers to compare the final times with.

Next year, keep an eye on the 3-year-olds at Fair Grounds in the spring. The longer distances of the three Derby prep races there might benefit those runners, and the stereotype that the Louisiana Derby and Fair Grounds are weak also will help give bettors added value.