What we learned: Life Is Good is not as good with slow pace 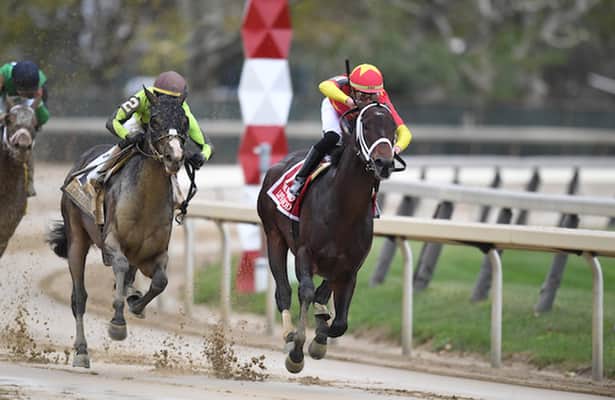 With the heavy favorite Life Is Good capturing the Grade 1 Woodward Stakes over Law Professor in second at the Belmont at Big A meet Saturday, the blog-suggested exacta paid an exciting $3.45 for $1. But the right order for the exacta almost did not happen, as Law Professor had a real chance to post an upset on the far turn.

Click here for Belmont at Big A entries and results.

Here is an explanation of why Law Professor made it close.

Get Paddock Prince picks for Belmont at Aqueduct - fresh off a late Pick 5 score Saturday!

Because Life Is Good set a slow pace with fractions of 24.40 seconds, 48.60 and 1:13.07, it kept the other horses in the race and gave them a chance. Why? When the pace runs slow and the field clusters together, it creates a turf-like scenario where the stalkers and closers need to make up only a small margin to close the gap. In most dirt races with a faster pace, the leader or leaders on the far turn might separate from the rest of the field and leave the closing horses with too many lengths to make up.

At the half-mile point, only 5 1/2 lengths came between Life Is Good and his stablemate Keepmeinmind in last. If a horse had enough run in him to make Life Is Good sweat, he could progress to the front in no time.

Law Professor took up the stalking position in third.

With pacesetters such as Life Is Good, their advantage comes from using speed to establish an uncontested lead and separating on the far turn to make it difficult for any closers to make up the ground.

Even though Life Is Good did secure an uncontested lead, he led the small and compact field through slow fractions through the early stages and had no advantage when the field began to approach the far turn. Therefore, Law Professor was able to attack Life Is Good directly and make him sweat rather than make up ground in a strung-out field without threatening.

To Law Professor’s credit, he ran a great race in defeat and clearly has shown improvement off the layoff for his new trainer Rob Atras. In his comeback race before the Woodward, Law Professor won the Tapit Stakes at Kentucky Downs on Sept. 1. His consistent record now stands at 12: 4-2-1.

Earlier this year, Law Professor hinted at his class by finishing second in the San Pasqual Stakes (G2) to Express Train after suffering from a wide trip. Law Professor also earned a 122 on TimeformUS for the effort and a 126 one race before when he won the off-the-turf Mathis Mile (G2).

To Life Is Good’s credit, he fought back when Law Professor came alongside him. Some need-the-lead horses fold at the faintest breath of a horse. Under urging, Life Is Good did not quit and repelled the bid.

Life Is Good's this new relaxed method of setting the pace might not work in the Breeders’ Cup Classic, which will contain horses as good or better than Law Professor and possibly a once-in-a-generation talent in Flightline. Life Is Good cannot let those horses remain close to him if he wants to win the biggest race of his career at a difficult distance for him.

As for Law Professor, he likely will excel in graded stakes races under his new trainer Atras. Given that Law Professor also won on turf at Kentucky Downs, the options for this 4-year-old gelding are limitless right now.

Keepmeinmind finished far back in third and has not progressed at all as a 4-year-old colt under Todd Pletcher. His comeback win on July 22 at Saratoga might look nice, but TimeformUS gave him a mediocre 109.

Most bettors who end up backing Life Is Good in the Breeders’ Cup Classic will want to see him sent and flying through the early stages. Not many supporters want to see Life Is Good rated if Flightline is tracking him in second and looking to get close to him. Even without Flightline there, rating a good speed horse usually does not end well.

Either way, the presence of both Life Is Good and Flightline in the same race will make for endless discussions among handicappers on the pace scenario for the Breeders’ Cup Classic. The stage is set for a showdown at Keeneland.