What we learned: Life Is Good looks invincible after romp 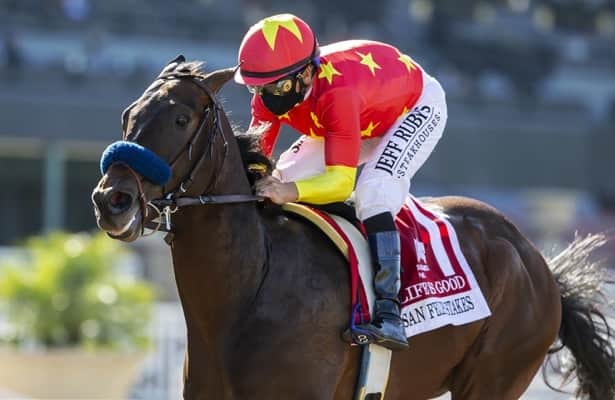 Life Is Good went into the San Felipe Stakes (G2) at Santa Anita yesterday with questions to answer, and he provided a great response to those questions as a dominating winner. Without a doubt, Life Is Good is the leader in the 3-year-old division, and by a good margin at this point.

Regardless of the trip notes below, Life Is Good was going to win the race. For those interested in nitpicking the blowout winner, his stablemate Medina Spirit did offer early help by not engaging with Life Is Good and carrying an opponent wide on the first turn.

To be fair, it is common for horses in the same barn to refrain from dueling each other. Long-time handicappers already know this as common.

On the first turn, watch Medina Spirit move into the three-path on purpose under John Velazquez, forcing The Great One four-wide early.

Life Is Good then sprints away as they straighten out on the backstretch.

Besides making The Great One’s first turn difficult, Medina Spirit also lets Life Is Good free on the lead without applying any pressure. As shown in his Robert B. Lewis Stakes (G2) victory, Medina Spirit owns enough speed to set the pace, or at least press early. Yet, he gives Life Is Good a free pass, rather than even attempt to secure a two-path pressing position.

To Life Is Good’s credit, he sets lively fractions of 23.63 and 46.83 on Santa Anita's slow dirt surface. He also holds a three-length advantage.

Medina Spirit, Dream Shake and The Great One cut slightly into that margin at the beginning of the far turn. Life Is Good does not let them come near though and he opens up by an even larger margin at the top of the stretch.

Life Is Good began to drift in the stretch, which was unprofessional, but not necessarily an indication of fatigue. If anything, this Into Mischief colt became bored on the lead. With Smith trying to keep him on a reasonable path, Life Is Good still won the race by eight lengths. Expect him to receive giant speed figures from Beyer and TimeformUS.

Medina Spirit moved forward in mid-stretch to secure the runner-up position, while the inexperienced Dream Shake settled for third.

Right now, Life Is Good appears unbeatable. He did receive help around the first turn, but that is probably not a huge deal. On the second turn and into the stretch, Life Is Good ran like he held a few extra gears in store, which is scary given that he set the pace and did not go slow early.

Life Is Good’s dominating win looks like it makes any final prep race he enters is unplayable. There is no way to play him at 1-5 and no way to beat him either. Bettors would make better use of their time by focusing on other races than spending their time hoping to profit greatly off a horse such as this.

Medina Spirit might earn a decent speed figure for his runner-up finish, but it will not compare to Life Is Good’s final number. His only chance to win in the final round of prep races is by avoiding his freakish stablemate.

Dream Shake remains on the path toward a bright future. His failure to outrun Medina Spirit for second is not a huge concern at this point, as the other horse had more experience under his belt. As with Medina Spirit, Dream Shake’s best chance to win next time is to ship somewhere else.

The Great One faded to fifth in a disappointing finish. Considering the minor trouble he endured on the first turn, though, it is hard to dismiss him completely yet.

Maxfield loses for the first time in Santa Anita Handicap

Later in the card, the aura around the previously undefeated Maxfield took a hit when he ran third in the Santa Anita Handicap (G1) at 1 1/4 miles. Instead of the even-money favorite winning, the 4-year-old Curlin colt Idol stole the show with a closing run to capture the Big Cap.

From a trip standpoint, Maxfield shows only minor excuses for his loss.

As expected, King Guillermo went to the lead, with Tizamagician right behind him. King Guillermo hit the first quarter in 22.82, which is fast on this slow, tiring dirt course.

Maxfield settles in mid-pack and 5 1/2 lengths back. The kickback bothers Maxfield, causing him to look uncomfortable as he runs into the turn.

On the backstretch, Maxfield is positioned wide.

Through a half-mile in 47.82, Independence Hall takes the inside path in third, while the blog choice Express Train stalks and travels outside of Independence Hall in fourth. Meanwhile, Idol lags in second-to-last.

At the beginning of the far turn, Express Train inches closer and Maxfield follows him while still running wide. Independence Hall continues to wait behind horses as Express Train and Maxfield gear up. Idol begins to creep closer, but he remains in fifth place after passing Coastal Defense.

Express Train leads into the stretch by a small margin. Maxfield has a clear shot at passing him, but despite Florent Geroux using the crop a few times, he fails to make up any more ground. Independence Hall stalls on the inside too, even though plenty of room opens up.

For a moment, it looks like Express Train is going to hold on and win. But Idol ranges up a few paths outside of Maxfield and then mows them all down in a sparkling closing effort. Idol captures the Big 'Cap by half a length over a tired Express Train, with Maxfield checking in a disappointing third.

Express Train receives credit for chasing a fast pace and moving first on the far turn. He arguably ran harder than the winner Idol.

In fairness to Maxfield, he did not run poorly for his first 1 1/4-mile effort and first Grade 1 attempt since the 2019 Breeders’ Futurity (G1) against 2-year-olds. As stated already, the initial kickback gave him some trouble.

To bettors, though, those points might not matter much since an army of followers still will bet Maxfield under fair value in any big race.

Independence Hall possibly needs to cut back to nine furlongs or less. As seen in the replay, Express Train creates room for him by drifting out. But Independence Hall stalls in mid-stretch, and this time it seems less excusable without a top horse such as Knicks Go in front of him.

What happened to King Guillermo? The horse went from winning the Tampa Bay Derby (G2) last year and finishing second to Nadal in the second division of the Arkansas Derby (G1) to becoming cheap speed in graded stakes races such as this one.