What we learned: Life Is Good's speed carries him to Whitney win 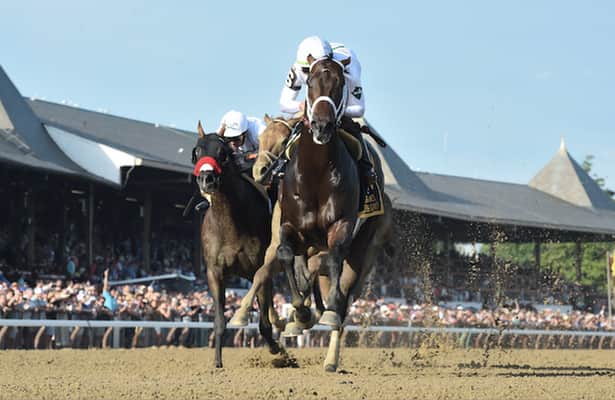 As stated before on this blog, securing the lead is sometimes more important than the actual fractions with need-the-lead types. These horses do not want another horse breathing on or near them.

Life Is Good fits the descriptions of a pacesetter who wants a loose lead, even at the cost of fast fractions. In the case of the Whitney Stakes (G1) Saturday at Saratoga, Life Is Good sprinted out of the gate to make sure he had enough clearance. He then crossed over and secured the important lead.

Hot Rod Charlie surprisingly did not break with any sharper with blinkers added, but he did move up around the first turn to take up his initial position behind Life Is Good. Olympiad settled into the stalking position in third.

A gap separated Olympiad and Happy Saver, who broke well and let the speed horses separate from him, in fourth. The overmatched Zoomer trailed the field.

Once the field straightened out for the backside, Life Is Good hammered down his uncontested lead and sprinted away again from Hot Rod Charlie and Olympiad. By the half-mile in 46.84 seconds, Life Is Good held a 3 1/2-length lead and the race looked almost over. Life Is Good maintained the lead heading into the far turn by two lengths while running six furlongs in 1:10.93, with Hot Rod Charlie still chasing him in second.

At this point, Olympiad was in deep waters once Happy Saver started to move past him on the inside. Instead of putting himself into striking position, Olympiad now had to struggle just to keep up.

With that said, it did not help when Junior Alvarado chose to take Olympiad six wide on the far turn, as Happy Saver saved all the ground and reached second. At the top of the stretch, Happy Saver threatened his stablemate Life Is Good, who looked tired.

When good speed horses lead uncontested, though, they tend to keep finding more in the stretch. Life Is Good had one last gear before the wire. After crossing over and forcing Happy Saver to switch paths, Life Is Good started to open up a little bit again to win by two lengths. Happy Saver held second by a head over a hanging Hot Rod Charlie.

After Hot Rod Charlie, it was 7 1/4 lengths to Olympiad. No matter if he traveled wide, Olympiad turned in a disappointing effort to lose by that many lengths. Just a few months ago in May, Olympiad had easily handled Happy Saver in the Alysheba Stakes (G2) at Churchill Downs.

Moving forward, the question is whether Life Is Good can handle 1 1/4 miles if the connections choose to point toward the Breeders’ Cup Classic, or even run in a race such as the Jockey Club Gold Cup (G1) at the end of the Saratoga meet.

Given his losing effort in the Dubai World Cup (G1), 10 furlongs seems slightly out of reach for Life Is Good. But then again, one can make the argument that the Meydan racetrack played deep and compromising that day.

Some horses can train into running a longer distance. With Life Is Good well into his campaign, he might improve in his second try at 1 1/4 miles.

Happy Saver took advantage of the pace and turned in his usual race. In retrospect, he was the right “backwheel” key if one figured in a fast pace to set him up and that one of the three big names would throw a clunker. With Olympiad empty late, he only had to beat Hot Rod Charlie for second.

Even though Hot Rod Charlie still runs well enough to hit the board in graded-stakes races this year, he has not moved forward off his solid 3-year-old season when he ran a great second to Essential Quality in the Belmont Stakes, crossed the wire first in the Haskell Stakes (G1) and won the Pennsylvania Derby (G1).

After running up a five-race win streak, maybe Olympiad deserves a pass for throwing in one clunker. But it is notable that Mandaloun failed to back up the quality of the Stephen Foster Stakes (G2) with a poor run in the San Diego Handicap (G2) last weekend at Del Mar. Even though Olympiad’s speed figure on the different brands in the Stephen Foster looks the same as Life Is Good, maybe the reality is that Olympiad is a step below that opponent.

Life Is Good needs the lead, and he did well to secure the lead early. He deserves credit for running hard and finding more in the stretch run to win.