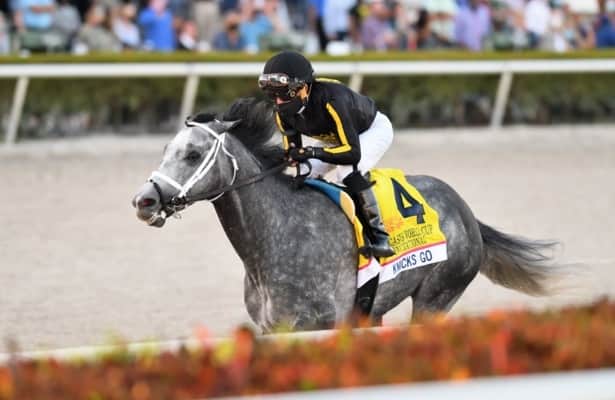 Not without some mild adversity, Knicks Go led from gate to wire in the $3 million Pegasus World Cup at Gulfstream Saturday. The son of Paynter now holds a remarkable four-for-four record under trainer Brad Cox since last February after losing 10 straight races before that.

As for the adversity, a brave 41-1 long shot in Last Judgment gave some pressure to Knicks Go, making the race at least a bit interesting.

Watch Knicks Go and Last Judgment break sharply. Paco Lopez directs Last Judgment toward the pacesetter to settle on his flank by the first turn.

Right behind Knicks Go and Last Judgment is Tax, who settles into a perfect position on the outside. To the inside is Independence Hall.

In fifth with good tactical speed is Jesus’ Team, while Code of Honor falls 9 3/4 lengths back in ninth and Sleepy Eyes Todd was 12 lengths behind in 10th.

After a swift half-mile in 46.16, the positions do not change.

Approaching the far turn, Last Judgment begins to fade, while Tax inches closer along with Independence Hall. Jesus’ Team starts to launch his move as well, and the race briefly looks interesting for those hoping for a better price than Knicks Go. The keyword is “briefly."

As the front tightens up on the turn, Code of Honor remains in mid-pack between Mr Freeze and Coastal Defense, while Sleepy Eyes Todd continues to lag farther back. For Sleepy Eyes Todd bettors, the frustrating part was knowing he has more speed.

At the top of the stretch, Knicks Go opens up under Joel Rosario.

Independence Hall is left alone in second, and Jesus’ Team ranges up in third. Tax folds, and Code of Honor reaches fourth with no further response. Sleepy Eyes Todd finally shows his best stride as well.

In mid-stretch, Rosario gives Knicks Go mostly a hand ride to keep his mount straight. Otherwise, their lead is insurmountable and the race is won. Knicks Go ends up crossing the wire 2 3/4 lengths in front of Jesus’ Team for the biggest victory of his career and first win at nine furlongs, opening many possibilities for nine-furlong races in the future.

Jesus’ Team gave a great effort to outrun Independence Hall for second and outrun his 11-1 odds. Expect this horse to keep hitting the board in the biggest races.

Independence Hall outran his 27-1 odds as well by running third. He did not resemble the flat horse in the Florida Derby (G1) last year on this course. As with Knicks Go, his great effort opens some options.

Sleepy Eyes Todd, who this blog offered as a top selection in the Lafayette Stakes and Mr. Prospector Stakes (G3), made up ground in the stretch. But he had too many lengths to make up and did not threaten. Why take away his speed when routing? His final punch in the lane is not the same. This horse will benefit from cutting back and pointing toward sprints and one-turn mile races.

Code of Honor came up empty with a lackluster move to struggle home in fifth. Even Sleepy Eyes Todd went by him. There is a point where a horse must prove he can still win, and that point is now. He is a play-against wherever he goes next time.

Tax was a disappointing 10th. Although it is hard to tell, he might need Lasix. If that is the case, the connections might want to skip the 2022 Pegasus.

Knicks Go’s future appears bright. Can he stretch out to 1 1/4 miles and point for classic distance races? That is the one remaining question left.

Is Colonel Liam the next big horse in turf racing? The 4-year-old son of Liam’s Map took a step in that direction with a narrow win in the $1 million Pegasus World Cup Turf Invitational for his third overall victory on turf.

With that said, Colonel Liam did receive a perfect trip.

Under Irad Ortiz Jr., Colonel Liam saves ground on the first turn behind a tight group led by Storm the Court, with Anothertwistafate pressing him.

Approaching the far turn, Ortiz begins to angle Colonel Liam off the rail. Colonel Liam still needs to wait, though, as he lacks the room to attack.

Finally, Colonel Liam tips out wide at the top of the stretch. He rallies outside of Social Paranoia, who begins to hang. Storm the Court and Anothertwistafate both fade. Largent starts moving nicely on the inside.

Ortiz gives Colonel Liam two right-handed hits, and then mostly hand rides his mount to the wire. Under an all-out ride from Paco Lopez, Largent attempts to run with him when he moves into the lead, but Colonel Liam wins by a neck.

In fairness to Largent, losing by a neck is not a huge margin, even on turf. However, when one watches how Ortiz rode Colonel Liam in comparison to Lopez on Largent, it is clear Colonel Liam was more impressive with less urging.

To call Colonel Liam a monster is premature. Let him rack up two or three more Grade 1 races in a row in easy fashion, and then he might deserve the label.

In the immediate moment, Colonel Liam is a talented colt trending in the right direction for trainer Todd Pletcher.