What we learned: Instant Coffee's win is not convincing 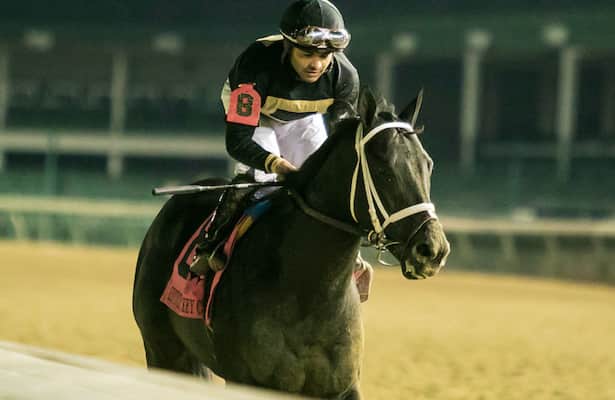 Instant Coffee finished on top in the Grade 2 Kentucky Jockey Club Stakes at Churchill Downs, but not without visible urging to rally and bad racing luck on his main competition. The crowded stretch run resembled how turf races finish, which is not a great sign when looking for a quality dirt race.

In most cases, dirt races that end in a cluster with most of the field together equals a negative race because it means they ran slowly. When dirt races finish in a fast time, separation occurs in the margins.

Granted, the field started off with a crawling pace.

Gigante set the pace with Cyclone Mischief on his flank through opening fractions in 24.76 seconds and 50 flat. Curly Jack sat in the pocket eager to go, while Freedom Trail had a stalking trip outside of the leaders in fourth.

At this point, Instant Coffee traveled in mid-pack behind Freedom Trail. Only 3 3/4 lengths separated Gigante from the trailer Western Ghent, and that margin strongly hinted at a slow pace even if no fractions appeared.

The race started off as a turf race. Then the field entered the far turn, and some of the traffic problems that happen in turf racing occurred.

As Gigante started to lose his grip on the lead, he backed off slightly on the inside, which caused Curly Jack to back off as well and lose some crucial ground. Given the crowded finish, every bit of lost ground proved costly because the final margins ended up small. Curly Jack continued to wait for room at the top of the stretch with no way to tip outside.

Instant Coffee had a clear run as all the problems to his inside occurred. He needed strong encouragement from jockey Luis Saez, who used the crop a couple of times in the stretch in addition to shaking the reins. Instant Coffee made the front, but the effort did not look convincing.

With the lead in hand, Instant Coffee managed to open slightly at the end for a 1 1/4-length win over Curly Jack, who found room late on the inside. Hayes Strike came over late on the outside for third, and Red Route One ended up fourth after all the trouble at the top of the stretch.

In contrast to the traffic problems of Curly Jack and Red Route One, Instant Coffee never had to stop when making his move.

The fact that Instant Coffee won with a clear trip makes the final time of 1:45.25 for the 1 1/16 miles feel disappointing. With Curly Jack and Red Route One stuck behind horses and Hayes Strike moving too late, Instant Coffee had every chance to dominate.

Instead, Instant Coffee needed an all-out effort to win by 1 1/4 lengths with only an 82 Beyer Speed Figure. Only one race earlier, Hoosier Philly won the Golden Rod Stakes (G2) in 1:43.94. In other words, Hoosier Philly finished the Golden Rod more than one second faster than Instant Coffee’s slow final time at the same distance. Maybe she is a star.

Plenty of time remains on the Derby trail for Instant Coffee to improve. He could turn into a fast colt in the next one or two prep races. But right now, this Bolt d’Oro colt remains in developmental mode and looks a bit slow at the moment. Compared with his stablemates in the Brad Cox stable, Instant Coffee is behind Loggins, who ran an excellent second to Forte in the Breeders’ Futurity (G1) at Keeneland.

Curly Jack will get another chance on the trail. In many cases, sitting in the pocket can pay off greatly if room opens on the far turn. In his case, room did not initially open inside or outside. Despite the loss, he is probably going in the right direction for trainer Tom Amoss.

Hayes Strike closed well for third after also finishing second in the Street Sense Stakes and fourth in the Iroquois Stakes (G3) on the same racetrack. Maybe he will end up as one of those horses who completes the trifecta more often than not, although he could just love Churchill.

Red Route One also deserves another chance on the trail after the traffic problems on the far turn and into the stretch. After a third in the Breeders' Futurity and distant fifth-place finish in the local Street Sense over slop, Red Route One did rebound slightly Saturday over fast dirt.

Overall, it felt like a slow prep race. All of these horses need to take more than just a step forward to become serious runners on the Derby trail.