What we learned: Hot Rod Charlie the 'star' of the Belmont Stakes 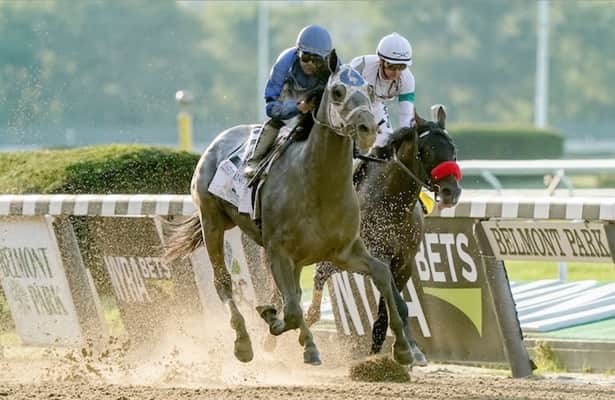 Essential Quality won the Belmont Stakes Saturday by a respectable margin, but Hot Rod Charlie stole the show and came off looking like the star of the race for many observers, especially pace handicappers.

Until now, Hot Rod Charlie has never been highly respected on this blog. But below you will find positive analysis and praise for the runner-up’s effort plus acknowledgment that Essential Quality ran well.

For Hot Rod Charlie, his race began with a good start under urging from jockey Flavien Prat and another slow break for the expected pacesetter Rock Your World. Meanwhile, Essential Quality went into the first turn in no hurry and found a spot outside Rombauer and next to Known Agenda early.

Rock Your World attempted to recover from the slow start and flashed his speed, but he became caught wide as France Go de Ina joined the front.

Watch the replay as Hot Rod Charlie, France Go de Ina and Rock Your World enter the turn together.

Hot Rod Charlie hits the opening fraction in a blitzing 22.78 for the marathon.

With Rock Your World pressing, Hot Rod Charlie continues to lead the Belmont field at the start of the backside. France Go de Ina lets Rock Your World cross over on the first turn and follows along in third.

Behind France Go de Ina is a sizable gap to the Preakness stakes champion Rombauer in fourth. Essential Quality initially runs in fifth, while the Todd Pletcher trio of Bourbonic, Known Agenda and Overtook take up the rear.

After Hot Rod Charlie reaches the half-mile in 46.49, it feels like Hot Rod Charlie and Rock Your World cannot keep up that kind of pace for 1 1/2 miles. The rest of the field, including Essential Quality, begin to catch up with the leaders, and suddenly the eight-horse field is compressed as they head into the second turn.

It turns out that the part where the field compresses gives Hot Rod Charlie a small break. He reaches the six-furlong point in 1:12.07.

On the far turn, Hot Rod Charlie still leads by a slim margin over Rock Your World, but Essential Quality moves forward alongside the pair and reaches the front.

At the top of the stretch, Essential Quality is leading the Belmont. After the nice pace setup in the first half-mile, he is supposed to put the race away by this point and finish off the job. Rock Your World quit, and only a weakened Hot Rod Charlie was left to offer a final fight.

Surprisingly, Hot Rod Charlie initially dug in and did offer a final fight. Hot Rod Charlie kept responding to the battle until about mid-stretch, when the effect of the torrid early pace finally took its toll on him. Essential Quality began to inch clear toward the wire and won by 1 1/4 lengths, but as stated, Hot Rod Charlie stole the show pace-wise.

Most handicappers were not going to fault Hot Rod Charlie for slipping back into mid-pack late. Yet he still tried hard to win. As with many 3-year-old speed horses this season, perhaps putting Hot Rod Charlie on the lead helped him run better in the stretch.

As a pacesetter this season, Hot Rod Charlie won the Louisiana Derby (G2) in March by two lengths, even after taking early pressure from Midnight Bourbon.

Hot Rod Charlie lost the Belmont Stakes, but he turned in his career best effort. He might need the lead for his best shot. Regardless, this is a major player for the second half of 2021.

Again, Essential Quality won the Belmont Stakes. He is obviously a major player in any top 3-year-old race he enters, although his advantage at nine or 10 furlongs is probably slimmer than in a marathon. He never seems to offer attractive odds either.

Rombauer started to make the same move he did in the Preakness. But this time, Rombauer could not shift out as easily with Known Agenda nearby. Then in the stretch, he flattened out as Essential Quality and Hot Rod Charlie pulled clear late.

From a pace standpoint, there is no excuse for Rombauer. He received the same setup that Essential Quality took advantage of. Not every closer excels when they stretch out, and it looks like the 1 1/2 miles dulled Rombauer’s closing punch a bit.

For Known Agenda in fourth, either that same comment about the marathon distance dulling his punch is true, or he is a slow horse who cannot keep up with this group. He gave a disappointing effort after moving into position on the far turn.

Yes, Known Agenda was the blog choice, and a bad one.

Bourbonic offered a decent closing run relative to his overall ability to pick up fifth. If the same race with the same group ran 100 times, he would probably not ever run better than fifth.

Rock Your World needs to go back to turf or find a completely paceless dirt race. Some turf horses run only one big race on dirt and never fire the same way again.

Overtook ended up as a disappointment for Pletcher as well by finishing seventh and 25 1/4 lengths off the leader. Maybe he is a better horse without the blinkers on.

Moving forward, respect Essential Quality wherever he shows up, but think about playing against him again if the odds are not at least fair. He is not invincible, as seen in his Kentucky Derby fourth-place finish.

Bet Hot Rod Charlie wherever he shows up if he can secure the lead – and if his odds do not become too low because of all the praise he has been receiving.