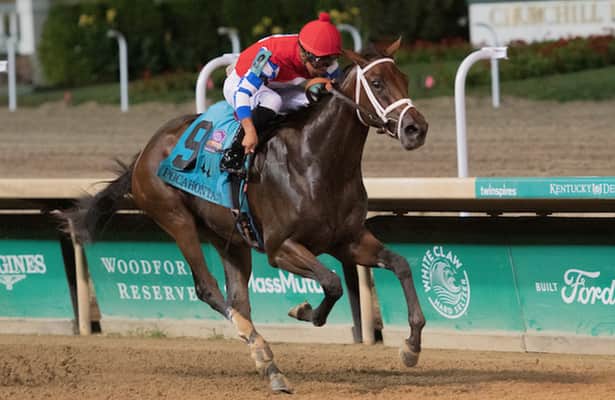 To start off the road to the Kentucky Oaks and Derby in May, Hidden Connection won the Pocahontas Stakes (G3) for 2-year-old fillies Saturday night at Churchill Downs, while Major General took the Iroquois Stakes (G2) for 2-year-olds one race later. As for which one ran better, that is a debatable question because each winner had different reasons to compliment their victories.

When Joyrunner scratched at the paddock, Hidden Connection received an initial break because Joyrunner had speed. Regardless, Hidden Connection’s win is easier to praise than Major General at first glance because of the 9 1/4-length margin and faster time of 1:43.78

Through the opening quarter in 24.26 and half-mile in 48.62, Hidden Connection comfortably sat on Lemieux’s flank and waited patiently.

After the half-mile, Lemieux began to get tired, as Hidden Connection crept closer to the lead and Majestic d’Oro inched forward as well.

Hidden Connection drew clear and won by 9 1/4 lengths. She made a great impression based on the big margin alone. Overcoming the wide first turn is notable as well, even if the rest of the trip after the turn was straightforward and comfortable for the most part.

Given Hidden Connection’s tactical speed and two big-margin wins in tow, she is an obvious threat in the Breeders’ Cup Juvenile Fillies at Del Mar. With that said, she did not get to that nine-length margin without the jockey asking her.

As for Major General, he lacks a big-margin win, but his troubled trip in the Iroquois makes the win better than the small final margin or time makes it appear.

First of all, Major General bobbled at the break. He made his recovery fast and found himself in the front mix heading into the first turn.

After taking the initial turn wide, Major General fell back into a stalking position about four lengths behind and continued to run wide.

Roger McQueen and Magnolia Midnight contested the pace while setting faster fractions than Lemieux did in the Pocahontas, with the two leaders hitting the opening quarter in 23.87 and half-mile in 47.89. The favorite Stellar Tap and Tough to Tame were right behind the early leaders.

At the start of the far turn, jockey Javier Castellano began to ask Major General for more and Major General responded well with a four-wide bid. Stellar Tap also responded with a three-wide bid and a showdown was inevitable between the even-money favorite and 9-2 Major General.

The showdown lasted until mid-stretch. After some bumping, Major General took command of the lead and put away a fading Stellar Tap on the inside. But Major General’s work was not done, as he had to face the closers late.

Tough to Tame gave his best shot toward the wire and almost caught the tired leader, but in the end, Major General held on by a neck to score a graded-stakes victory in only his second start, just like Hidden Connection.

Major General’s neck margin to win might sound disappointing at first glance. He also beat the third-place Red Knobs by only one length and his old foe Bourbon Heist by 1 1/2 lengths. In dirt racing, a clustered finish usually does not signal a quality race. Plus, his final time of 1:44.88 is more than a second slower than Hidden Connection.

But Major General got caught wide on the first turn through a relatively fast pace in comparison to the Pocahontas. He then became caught wide again when making his move into the far turn. Facing the talented Stellar Tap at the top of the stretch also had to weaken him.

With those obstacles in mind, Major General ran well. He also switched leads this time, which demonstrates he can learn and improve.

Does Major General need another step forward if the connections decide to go for the Breeders’ Cup Juvenile? Sure. By November, most of his peers will run faster speed figures, which means he does need to run faster.

If nothing else, though, Major General already owns a two-turn route win in a graded-stakes race, and that kind of experience prepares him for the two-turn route he needs to face at Del Mar in the Breeders' Cup.

Also keep an eye on Tough to Tame and Red Knobs. Both of them made significant steps forward off their slow maiden wins at second-tier tracks.

In the case of Tough to Tame, he had a troubled trip himself. On the first turn, he was hard to handle under Sophie Doyle while traveling behind the leaders and did not seem comfortable running in the pocket.

Yet, Tough to Tame made a nice move forward late in the stretch after he put himself together enough to run in a straight line. He is one to watch.

Red Knobs is a Union Rags colt out of a Lonhro dam. He could move forward as the distances become longer on the Derby trail.

Stellar Tap might deserve another chance from bettors too. Although the rail is normally an excellent spot at Churchill, it was possibly a bit dull last night. If dirt does not work out for him, he does show a great turf pedigree.

As the top blog selection, Major General paid a generous $11.80 to win. There is no reason he cannot move forward if he takes a shot at the Breeders’ Cup, especially under the care of trainer Todd Pletcher.