What we learned: Great ride results in Preakness win 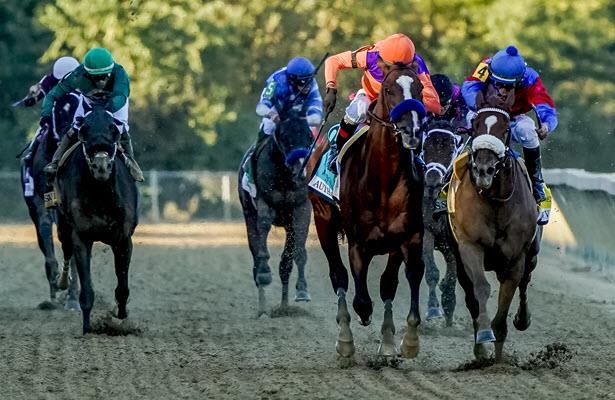 Swiss Skydiver made the Preakness Stakes at Pimlico yesterday even more historically significant by becoming the sixth female to win after outdueling Authentic in the stretch. The filly’s time of 1:53.28 for the 1 3/16 mile is also the second fastest in Preakness history, only behind Secretariat’s controversial 1:53 flat in 1973.

To accomplish those feats, she made an important move on the backstretch. When Thousand Words on the rail began to fade, Robby Albarado on Swiss Skydiver took the initiative and went to the front rather than let Authentic lead into the stretch.

Watch Swiss Skydiver move to the front right after the half-mile.

Authentic went right along with Swiss Skydiver, though, and the two horses separated themselves from Pneumatic, Art Collector and the rest of the field.

Into the stretch, Swiss Skydiver took Authentic’s role in the Kentucky Derby, with Authentic, similar to Tiz the Law, attempting to pass in the lane. Authentic never quit trying until the wire in a gallant effort, but Swiss Skydiver remained stubborn and held him off .

Would Authentic have won if Swiss Skydiver never hit the front before the turn? That is possible. Regardless, Swiss Skydiver and Albarado deserve credit for not waiting and finding out.

Remember that in the Kentucky Oaks, Swiss Skydiver tried to move up inside after a half-mile, but Gamine shifted back to the left and closed the gap. Instead, Swiss Skydiver had to tip outside at the top of the stretch and target Shedaresthedevil, who held on off Swiss Skydiver late.

In this spot, moving early made the difference.

Besides the 1:53.28 raw time, Swiss Skydiver also earned a career-high 127 TimeformUS Speed Figure for the Preakness victory, while Authentic receives a 126 for the sharp effort in second.

For those who prefer Beyer Speed Figures, both horses received a 105.

Even though Authentic lost to the filly, this is obviously a talented colt who won the Kentucky Derby and now ran a close second in the Preakness, with 9 ¾ lengths between him and the third-place Jesus’ Team. His record is currently 7: 5-2-0.

Authentic’s two route losses came when he did not secure an uncontested lead. In the Santa Anita Derby (G1), he came out at the break and ran on the outside contesting the pace. In this spot, his stablemate Thousand Words hit the front before he did. Thousand Words gave way early, but Authentic never got a breather when Swiss Skydiver made that winning move and forced Authentic to keep up.

Still, the long separation between Authentic and Jesus’ Team shows he put up a quality race. Authentic’s consistent record shows he poses a threat in any race he enters. But Authentic does seem to want a lone lead for his best chance to win, even if he remains a threat otherwise.

To touch upon Jesus’ Team, he is only a decent horse who is capable of passing tired horses in the lane for a piece at the highest level. If he enters the Breeders’ Cup Classic, he is not a real win threat, but one that could be useful underneath.

As for Art Collector in fourth, what happened?

From the moment the gates opened, Art Collector gave the impression of a flat horse. He let Swiss Skydiver cross over him, and then ran in a bad spot from there behind the leaders Thousand Words and Authentic, while sandwiched in between Swiss Skydiver and Pneumatic as well.

On the turn, Art Collector had more breathing room to move forward, if he had run. But nothing was left in the tank and he could not even hold off Jesus’ Team for third.

Either Art Collector needed this race off the minor foot problem, or something is still bothering him. He did not resemble the horse who won the Blue Grass Stakes (G2) in July. At least Art Collector stuck around to complete the superfecta though.

Pneumatic disappointingly folded all the way to 10th after running with the front group through the early stages. Perhaps he needed more seasoning before tackling this level of horses again in a large field.


This blog did not go without a winner on the Pimlico card.

For those who read the Weekend Plays post, Miss Marissa was the selection in the Black-Eyed Susan Stakes (G2). She possessed more speed than Bonny South, and if the favorite had traffic issues on the turn, Miss Marissa would hold better position into the stretch run.

The race unfolded exactly in that proposed scenario.

Miss Marissa utilized her speed to secure a pressing position alongside Mizzen Beau, who took the field through fractions of 23.10 and 46.61.

As the field hit the turn, Miss Marissa began to gain an edge on Mizzen Beau. In a grinding fashion, she slowly inched clear of her pace foe.

Meanwhile, Bonny South encountered some traffic while weaving through horses. She tipped outside on the turn and went at least six wide before taking aim at Miss Marissa. Bonny South began to pick up momentum quickly once in the clear in midstretch, but Miss Marissa already put up enough separation on the lead to hold the favorite off.

Miss Marissa held on by a neck over Bonny South to win at a generous 10-1, paying $22.20 for a $2 win bet. She earned a career-high 116 TimeformUS Speed Figure for the winning effort. Bonny South also equaled Miss Marissa with a 116 on TimeformUS for the runner-up finish.

In fairness, Bonny South is a better filly than Miss Marissa. She just lost as the result of a large field giving her traffic problems, forcing her to make a wide move.

Betting is not always about picking the best horse though. Sometimes an improving type such as Miss Marissa can get away with a better position and score the upset.