What we learned: Global Campaign a fit for the Belmont? 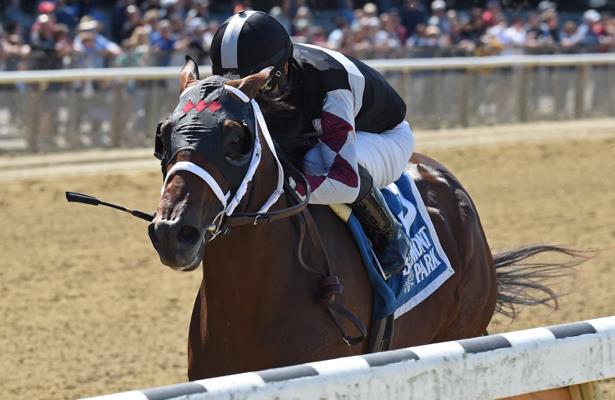 True marathoners are rare these days with the breeding industry emphasizing speed and a quick return over a slow developer with a nice distance pedigree. But handicappers can still search for specific clues.

For one, a true marathoner will move like a grinding type who gradually makes his way toward the front rather than snap into a move. The second checkpoint is pedigree, which is a highly debatable topic.

After Global Campaign won Saturday's Peter Pan Stakes (G3) at Belmont Park with a solid performance, talk immediately began of whether he might try the June 8 Belmont Stakes. But there good are reasons to doubt him.

Global Campaign chased a fast pace set by the rabbit Federal Case, who ripped through the opening fractions in 23.19, 46 flat and 1:10.16. A grinding marathoner would likely fall several lengths off such a blistering pace, but Global Campaign kept up and never fell more than 1 1/2 lengths behind.

On the turn, Global Campaign made his move and took over. At one point, he put away Federal Case and opened up in the stretch by three lengths.

But at that moment, Luis Saez put Global Campaign into an all-out drive, and the colt needed everything in reserve to hold off Sir Winston.

While he did well to endure the pace and hold on, this is a flashy type of colt who lacks the right pedigree. Everyone points out the sire, Curlin, but Global Campaign is also a son of Globe Trot, the dam who produced the sprinter Sonic Mule and Bolt d’Oro. At 1 1/4 miles, Bolt d’Oro dropped like a rock on the far turn of last year's Kentucky Derby. In his prior route races, he also looked like a slight hanger.

Also, this horse was entered in the Pat Day Mile (G3) on Kentucky Derby Day, and only did not run because it was over subscribed. That is a tipoff the connections believe Global Campaign fits better at mile distances.

It is easy to become impressed by Global Campaign after his win, as he did a great job without thinking of Belmont implications. But the red flags are there in relation to distance. Bet this colt if he goes in the seven-furlong Woody Stephens (G2), not the 1 1/2-mile Belmont Stakes.

Score one for TimeformUS Pace Projector in the Vagrancy Handicap (G3) to start Belmont Saturday card, as it predicted Heavenhasmynikki on the lead through a slow pace. Because that is the best trip for a dirt speed horse, Heavenhasmynikki took advantage and won her first graded stakes.

Despite getting chased by Separationofpowers from a length behind, Heavenhasmynikki did not fold and put the favorite away.

Then she had to hold off Pacific Gale, who switched out and made one final bid. Heavenhasmynikki was slowing down, but she had enough.

I pointed out Heavenhasmynikki, but picked her second and figured the classier Separationofpowers was going to sit close and make a winning bid. The latter sat close, yet she could not outrun the pacesetter.

Even though trainer Chad Brown does not normally leave horses short, it is fair to suggest Separationofpowers needed this race coming back from surgery to repair a bone chip. She gets one pass.

The runner-up Pacific Gale ran well, and there is an argument she was the winner with a luckier trip. But nonetheless, she continues her losing form.

Heavenhasmynikki was lucky with the pace scenario and fits the bill of a horse to go against next time. She has progressed nicely, though.

In the Beaugay, I thought Homerique needed more distance for her best run, as the original connections debuted the filly in a 1 1/4-mile race over in Europe. She proved the logic wrong with an outside rally to win.

As for Competitionofideas, she was able to save ground for the initial part of the race. When it came time to switch out in the stretch run, she lacked room outside and needed to come inside the fading leader Chipolata. Sometimes horses do not like moving inside, as it is more stressful.

Regardless, when faced with her stablemate on the outside, Competitionofideas failed to outrun her while under a heavy ride.

Homerique looks like another turf star for trainer Chad Brown.

Pace-wise, the Man o’ War ran in an interesting way as Hunting Horn attempted to pull a Presious Passion and take them all the way with a massive early lead. According to the chart, at one point he ran a whopping eight lengths in front, which is an unusual margin in turf racing.

But the strategy took its toll, and Hunting Horn gradually gave way in the stretch run to Channel Maker, Arklow and the aforementioned Magic Wand. Hunting Horn ran a brave race though and stayed in the picture.

Channel Maker has been around for a while now. He won, but seems like an on again/off again type of horse who will inevitably disappoint with a flop.

Arklow is in career best form. Throw out the return race at Keeneland, as he lost the rider. In his last five starts with a rider on for the entire race, he is 5: 2-2-0. The lone finish out of the top three came in the Breeders’ Cup Turf.

Magic Wand ran her usual race. Her only recent flop was in Dubai.

On 'Fire' at Belmont

Also at Belmont, Firenze Fire and Recruiting Ready both started at 9-5 in the Runhappy Stakes. But Firenze Fire ran like he was 6-5. It was a big improvement over his return race at Tampa Bay.

Watch for him in the Metropolitan Handicap (G1) against names like McKinzie, Mitole and Coal Front.