What we learned: Fighting Mad hurt by pace in La Canada fade 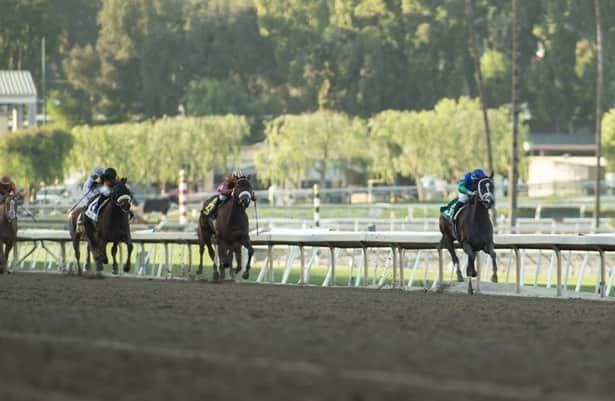 From a pace standpoint, the La Canada Stakes (G3) at Santa Anita is an interesting one for a post-race analysis. Heavy favorite Fighting Mad and second choice Hard Not to Love became compromised quickly when sparring up front, resulting in a surprising exacta of Sanenus and Miss Stormy D at the end.

Remember that most Bob Baffert-trained horses thrive on the lead, including Fighting Mad. Her two big wins in the Santa Maria Stakes (G2) and Clement L. Hirsch Stakes (G1) last year both came while setting the pace with a small cushion.

Hard Not to Love and Ricardo Gonzalez took that option away.

Watch as Hard Not to Love saves ground on the first turn and challenges Fighting Mad right away. Gonzalez wastes no time in being aggressive.

Hard Not to Love leads through the opening quarter while quickening, forcing Fighting Mad to run faster than ideal alongside Hard Not to Love. The two separate from Sanenus in third and Miss Stormy D in fourth.

After an opening quarter in 23.30, Fighting Mad hits the half-mile point in 46.37. Hard Not to Love momentarily backs off, but she then moves up along with Sanenus and Miss Stormy D, who both try to take advantage.

Without thinking further, 23.30 and 46.37 fractions might seem moderate for the Grade 3 level. For the current Santa Anita dirt surface, though, those are fast numbers. In any case, the visual flow of the race helps support the idea of a fast pace.

Hard Not to Love briefly puts her head back in front as Fighting Mad folds under the new wave of pressure. However, Sanenus soon leads with Miss Stormy D looming in second. Hard Not to Love drops back to third, but Ricardo Gonzalez keeps busy on her and she never stops trying.

Under a vigorous ride from Umberto Rispoli, Sanenus opens up in the stretch run and draws clear from Miss Stormy D to win by six lengths at 7-1.

Miss Stormy D almost gets caught by a resilient Hard Not to Love, who tries hard to pick up second after initially not keeping up on the turn. Nevertheless, Miss Stormy D keeps the runner-up position at 14-1 as the blog pick, while Hard Not to Love settles for third at 3-1. Fighting Mad folds back to fifth as the 4-5 favorite, 12 3/4 lengths behind Sanenus.

Forget about the raw times. Sanenus ran a great race as the winner, although Hard Not to Love and Fighting Mad did set up the race for the 5-year-old Scat Daddy mare. By the time Sanenus began to move, the top two horses already were spent by the opening duel.

As predicted earlier on this blog, Miss Stormy D did improve off the fourth-place finish in the Bayakoa Stakes (G3) at Los Alamitos. However, her inability to keep up with Sanenus in the stretch run was disappointing.

To Miss Stormy D’s credit, she went wide on the first turn through a fast opening quarter, and that is never an easy scenario to recover from. But she also almost lost second in the stretch run despite initially separating from Hard Not to Love.

Hard Not to Love turned in a better effort than the results indicate.

The initial gambit to make Fighting Mad quicken early before backing off the pace softened up the favorite, but it also lost her the race. Hard Not to Love barely received a breather as Sanenus and Miss Stormy D pushed her along right back.

After all the hard pace work early on, the fact that Hard Not to Love tries to catch Miss Stormy D late is a great sign. She misses the runner-up spot by only a nose.

Expect Hard Not to Love to offer value odds off this effort. If the next field lacks any monsters, then she probably can bounce back.

As for Fighting Mad, she lost after Hard Not to Love led and made her run faster to keep up. Not all Baffert horses need the lead, but this one does. Notice that all three of Fighting Mad’s graded stakes victories came with an uncontested lead.

When Fighting Mad finds a soft graded stakes race where she can secure a comfortable lead, she can win a fourth one. Given her preference of a lone lead and the 104-day layoff, the fade to fifth is not a huge concern. Even though Baffert trains this mare, she might even offer value next time.

Propping up the losers might seem strange, but the majority of handicappers will see only Sanenus running a good race. But Hard Not to Love and Fighting Mad had to endure a difficult pace, and both of them deserve a closer look next time in their second starts off the layoff.

Watch their value by studying whether the public is discouraged by their efforts in this race.

3-year-old rankings: Who's missing and who's up next?
With the 2021 Kentucky Derby  now just three and a...