What we learned: Essential Quality secures his standing 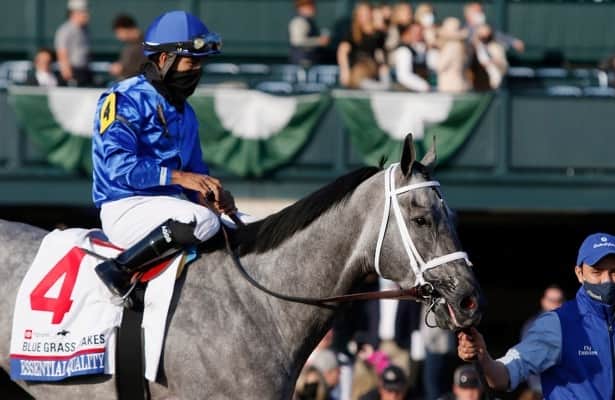 Essential Quality took the Blue Grass Stakes (G2) at Keeneland in arguably the best performance of his career to keep his undefeated record intact and secure his standing as one of the top public choices in the Kentucky Derby on May 1.

For some observers, Essential Quality’s winning margin of only a neck over Highly Motivated in second might give some pause for concern. But he gets a pass for the short margin because he beat a good runner in Highly Motivated and the two of them separated in the stretch. In fact, the entire field strung out at the end.

[RELATED: Who's in, out and on the Kentucky Derby points bubble]

To address the analysis before the race, there were some concerns about Highly Motivated stretching out to nine furlongs after four straight one-turn races. But there was no question of talent, as he won the Nyquist Stakes last year by 4 1/4 lengths and came back with a closing third in the one-mile Gotham Stakes (G3) last month.

In terms of nine furlongs at least, Highly Motivated put the distance fears to rest with his effort after setting a pressured early pace with a champion beside him and continuing the fight in the stretch.

In the stretch run, Highly Motivated kept defending his lead and gave the impression that he might outduel Essential Quality.

Until mid-stretch, Highly Motivated was still in front.

Highly Motivated made an error in switching back to his wrong lead. Viewers of the replay above could pause the video at exactly 1:49 to see when it happens.

Did Highly Motivated switch back to his wrong lead out of fatigue? That point is one to consider when analyzing his chances in the Kentucky Derby, although maybe that is naturally how he runs.

Essential Quality earned a 118 TimeformUS Speed Figure and 97 Beyer Speed Figure. Also notable is the final time of 1:48.50, which is two seconds faster than Ghazaaly’s nine-furlong maiden win for Todd Pletcher in Race 1 earlier in the card.

Rock Your World made his dirt debut a successful one by winning the Santa Anita Derby (G1) on the lead and establishing himself as a top Derby contender. He won his third race in three starts for trainer John Sadler and proved his doubters wrong (including this one).

As for his trip, jockey Umberto Rispoli made a good decision in allowing Rock Your World to roll early. Parnelli wanted to go with him, but he went slightly wide on purpose around the first turn instead. With Parnelli avoiding a direct duel, he also kept Medina Spirit just a bit wide.

Given the nine-furlong distance, Rock Your World probably set fast fractions; the TimeformUS Pace Figures to confirm that are not released yet.

On the far turn, Rock Your World began to open up on the field, with Medina Spirit churning on in second and Dream Shake traveling inside Medina Spirit in third. Defunded began to wind up and pass horses on the outside, but he still had plenty of work left from his position.

Rock Your World never gave them a chance. He began to open up more in mid-stretch and eventually won by a 4 1/4-length margin over Medina Spirit.

Beyond that, a healthy 2 1/4 lengths came between Medina Spirit and Dream Shake in third, with another 4 3/4 lengths to Defunded in fourth and 6 3/4 lengths between Defunded and Law Professor in fifth. The spaced-out margins are a great sign.

Rock Your World ran the nine furlongs in 1:49.17, although there are no other nine-furlong races to compare with on the card. Neither the final TimeformUS Speed Figure or Beyer Speed Figure are released as of this writing. But if Medina Spirit matches his high TimeformUS figure of 120, expect Rock Your World to break 120.

Most important, Rock Your World owns the speed to possibly secure the lead before Concert Tour and control the Kentucky Derby pace. Since the implementation of a Derby points system, speed has been a major advantage.

If anyone read the early preview analysis, yes, Rock Your World was labeled a “Toss” because of questionable workouts. He won in an impressive manner, proving the analysis wrong. As a handicapper, it remains important to not get stuck on past opinions and adapt.

Medina Spirit had to endure a poor first turn when Parnelli kept him slightly wide through a fast pace. Still, his overall effort was kind of disappointing given he did not move forward off his previous trail runs.

Dream Shake is one talented 3-year-old to place in his first two graded stakes attempts after breaking his maiden at first asking. From a betting standpoint, though, he is not developing fast enough to trust him on top in the Kentucky Derby.

Assuming the speed figure on Beyer and TimeformUS both appear fast, Rock Your World is now a top 3 player along with Essential Quality and Concert Tour.