What we learned: Essential Quality was better than it seems 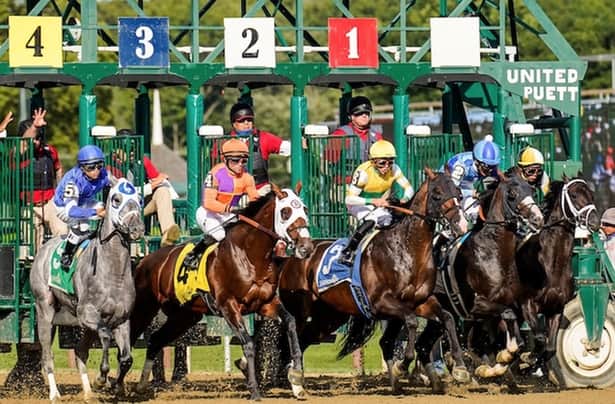 In Essential Quality's win in the Jim Dandy Stakes (G2) Saturday at Saratoga over Keepmeinmind, there are a few positive notes in his favor that make his performance more appealing than the half-length margin indicates. He arguably was the best horse by a few lengths.

It feels like a pointless exercise to pick apart Essential Quality’s effort because his odds will remain extremely low in the Travers Stakes (G1). Nevertheless, here is a breakdown of the Jim Dandy.

The entire field broke well and went toward the first turn as a line.

Essential Quality began from Post 5, setting up a five-wide first turn for him. He had no choice except to endure it.

Dr Jack set the pace with an opening quarter in 23.81 and half-mile in 47.41. Meanwhile, the Ohio Derby (G3) winner Masqueparade gave Dr Jack about half-length of space early in second, with Weyburn right there in third.

Essential Quality and Keepmeinmind initially were last and second-to-last. Both closers were 3 1/2 lengths off Dr Jack after the first quarter.

Approaching the far turn, Weyburn and Masqueparade made the first moves and hit the front. Essential Quality went forward to challenge them, although he had to go wide again and outside of Weyburn. Meanwhile, Keepmeinmind was directed to wait behind horses under Rosario. He found room when Dr Jack folded and Masqueparade drifted right before straightening out, giving Keepmeinmind a big opening on the inside.

At this point, Essential Quality had run wide on both turns while chasing a decent pace for a nine-furlong Saratoga race. To make matters worse, Weyburn under Irad Ortiz Jr. tried to float out Essential Quality as they hit the top of the stretch. The race riding is not severe, but it ensures that Essential Quality briefly runs six wide before unloading his final run.

Keepmeinmind fought well against Essential Quality, although it was a brief battle for the top slot. When Rosario began hitting Keepmeinmind left-handed, he made a move forward and suddenly the upset became possible for a moment. Essential Quality hit back with his response to the challenge and gained the late advantage as the two of them hit the wire.

Essential Quality won by half a length. Accounting for ground loss because of the wide turns and Weyburn’s antics, he was a few lengths better than the half-length margin makes it seem. In contrast, Keepmeinmind had the benefit of saving ground on the far turn as he waited for his opening.

From a betting perspective, does it matter? The public remains excited to play Essential Quality in the Travers, despite the narrow win over Keepmeinmind. The point of uncovering a bad trip is to see whether the public overlooks it and lets the horse start at value odds next time, but that will not happen with Essential Quality.

At the same time, Essential Quality is not invincible. The Kentucky Derby shows that he can miss the trifecta against top 3-year-olds. Also, he will need to deal with other good horses besides Keepmeinmind in the Travers. If Hot Rod Charlie flies over, he could turn the tables. The Curlin winner Dynamic One looks like a new horse, while Miles D is improving fast.

The blog choice Keepmeinmind turned in the best effort of his career in his runner-up Jim Dandy finish. At 9-1, he certainly outran his odds in this five-horse field. Although Keepmeinmind began the year in dull fashion with poor efforts in the Rebel Stakes (G2) and Blue Grass Stakes (G2), he came back to life with a good seventh in the Kentucky Derby (after starting from 19th) and a fourth in the Preakness Stakes.

Keepmeinmind’s close third by half a length in the Ohio Derby (G3) and second in the Jim Dandy Stakes (G2) by the same margin are the logical progressions of his return to form. Now, he just needs to put everything together to win again, and that milestone should happen soon.

But it felt like Saturday was the day to bet Keepmeinmind. After almost beating Essential Quality, the public might not overlook him.

As for Masqueparade, he ran well for his second career stakes start. He fought on for a short while in the stretch run before giving way to third at the finish. If the connections think he can regroup and fire in the Travers, he deserves a shot. But it would not hurt to see Masqueparade slow down and seek another Grade 2 or 3.

Given that Weyburn faded to fourth by 6 3/4 lengths and Dr Jack was last by 29 lengths, Masqueparade likely ran better than his losing margin indicates. Perhaps traveling nine furlongs at Saratoga is a grueling experience for horses with early speed.

Essential Quality won and deserves handicapping extra credit for the wide trip. With that said, his growing fanbase and star status make him difficult to bet. This kind of horse is good for attracting new fans and growing the game, but it also makes him a certain underlay in the Travers as any of his shortcomings will be ignored. Most fans seem eager to say nothing but positive statements about his races.

Given his starpower, be aware of Essential Quality's value – or lack of it – next month in the Travers. It might not hurt to take another shot against him.