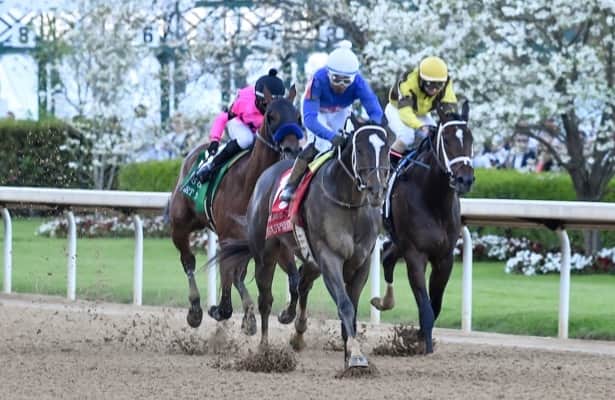 Although the results of the Arkansas Derby (G1) brought disappointment to many bettors, they brought clarity to the changing Kentucky Derby picture.

In his second start off the bench, 12-1 Super Stock took advantage of a stalking trip to mow down Caddo River and Concert Tour for a 2 1/2-length win. That is an upset, but not a massive one as there were signs of talent in his 2-year-old form.

Caddo River held second by a head over the Bob Baffert-trained favorite Concert Tour, with only half a length back to Get Her Number in fourth.

From watching the race, it is clear that Concert Tour is not the next Baffert monster. Without the lead, he is just another horse on the trail.

As for Caddo River, he ran an improved race with the lead secured.

Yet even with the lead, Caddo River is just another horse on the trail as well. In fact, Concert Tour briefly went in front of Caddo River at the top of the stretch before Caddo River fought back in an all-out effort under heavy left-handed encouragement from Florent Geroux. Visually, they both were average.

Super Stock shows a mild 116 TimeformUS Speed Figure for his Arkansas Derby victory. Caddo River is one point higher at 117 because of pace credit and Concert Tour ties Super Stock with a 116 despite finishing third.

In other words, all three horses are probably too slow in terms of the Kentucky Derby win spot. Concert Tour did not move forward with an expected breakthrough performance, while Caddo River and Super Stock only went forward enough to become part of the Derby crowd in the 115-119 range on TimeformUS rather than standing out among the 3-year-olds.

Super Stock backers might argue another move forward is coming. He makes his third start off the layoff in the Kentucky Derby, which might result in a peak effort, although that is a difficult spot if traffic occurs.

Caddo River made his third start of the year, while Concert Tour ran for the fourth time this season. Ultimately, both runners let a 1-for-7 colt who made only his second start off the layoff and had trouble finishing off races as a 2-year-old pass them in the stretch. Even though Caddo River and Concert Tour eventually could become top 3- or 4-year-old horses, right now, it looks like they hit their current top level.

To address Get Her Number’s closing fourth-place finish, he did improve in his second start off the bench as well and almost caught a tired Concert Tour in third. For the entire second turn and stretch run, he was under a hard ride, though. Is 20 points enough if there are late defections?

For Get Her Number's development, it is probably better for him to miss the 20-horse Kentucky Derby and point toward the Preakness instead.

Hozier quit while approaching the far turn after racing between horses and up close. Other than a less comfortable position with more dirt in his face, there is little explanation for his flop as the 9-1 public third choice.

The two blog choices were Hozier and Concert Tour, which means they both disappointed. That is horse racing. Finding another horse besides Concert Tour was the right approach, but Hozier did not deliver at all.

Some observers say Concert Tour’s loss promotes chaos in handicapping the Kentucky Derby. Why? Concert Tour’s disappointing effort yesterday does not wipe out the performances of Rock Your World or Essential Quality.

With Concert Tour exposed, Rock Your World and Essential Quality become the only 3-year-old horses pointing toward the Kentucky Derby that stand out, with the former horse a leader based on his last speed figure and the latter an incredibly versatile runner who wants to win.

For handicappers wanting to see a classic example of a pace meltdown, look no further than the Lexington Stakes (G3) at Keeneland.

Thanks to blazing early fractions and slop, the 18-1 King Fury took advantage with his late run and won over fellow closer Unbridled Honor in second. Out of the early pace horses, only Starrininmydreams stuck around for a minor share in third.

As expected, recent maiden winner Noble Reflection made his way to the lead on the first turn, with Swiftsure on his tail and Bezos not far behind them.

Unfortunately, the three jockeys forgot to conserve early energy and began to separate from the field. From Bezos to Starrininmydreams came a noticeable gap, with a bigger gap from Starrininmydreams to Hockey Dad and It’s My House.

When the field fractures like it did here in the opening quarter, the pace is burning. Handicappers do not need to know the fractions to see this.

Noble Reflection set fractions of 22.39 and 45.87, which are marked in red by TimeformUS.

Obviously, the three inexperienced runners up front began to tire. As Bezos quit, Starrininmydreams began to position himself in the clear to pass them. During his move, though, King Fury came into the picture and between horses.

King Fury went by a fading Swiftsure and took control of the lead at the top of the stretch, with a tired Starrininmydreams in second and Unbridled Honor in third. Noble Reflection hung in the picture a little longer but gave way as well.

With the advantage of an early move while saving ground, King Fury opened up in the stretch and won by 2 3/4 lengths with a 117 TimeformUS Speed Figure.

King Fury is one to watch moving forward, but also keep an eye on Starrininmydreams. Although Starrininmydreams ran a few lengths behind the inexperienced trio setting the pace, he still felt enough of the pace.

According to the TimeformUS results chart, Starrininmydreams put up blazing early pace figures of 154 and 139, before understandably slowing down to a 120, 114 and a final raw speed figure of 111. Starrininmydream’s TimeformUS Speed Figure of 113 for the third place also marks his career high.

King Fury also ran a lifetime best 117 TimeformUS Speed Figure. He needs to prove he can duplicate this effort without an extreme pace setup. Otherwise, the win is a good start to his campaign, and he gives the impression of a viable Preakness contender for Ken McPeek.