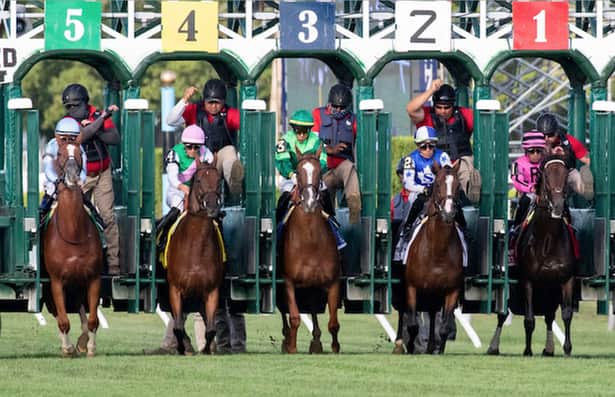 Despite a moderate pace along with an uncontested leader and small field in the Grade 1 Fourstardave Handicap at Saratoga Saturday, Casa Creed made a winning move in the stretch to pick up his third Grade 1 win and first one in a route.

On paper, the race did not set up well for the 6-year-old son of Jimmy Creed. At least, that is what this handicapper thought, as well as others.

When analyzing a small field with an expected moderate to slow pace, it usually makes sense to pick the best speed horse entered. But small fields can result in closers sitting closer to the lead because of a purposeful change in strategy or because less traffic allows a natural shift in style. With fewer horses in the way, closers can move forward into a more upfront position.

Also, slow-paced turf races encourage the field to became bunched up with less overall distance from the leader to the end. Ironically, this type of pace situation helps closers because there is less ground to cover when making a move. Needing to cover only three to five lengths to win might mean a huge difference, as opposed to being seven or eight lengths behind.

In the case of the Fourstardave, Get Smokin secured the lead as expected and opened an initial two-length cushion with opening fractions of 24.01 and 47.94 seconds. Masen tracked the pacesetter in second through the half-mile, with Regal Glory in third, Front Run the Fed in fourth and Casa Creed last.

Because of the moderate pace and small field, only 3 1/2 lengths separated the leader Get Smokin and Casa Creed after a half-mile. Unless some of the horses in front of him could start to break away on the far turn, Casa Creed had a decent chance at this point to make up the mild gap.

Get Smokin failed to break free on the far turn, while Masen did not fare any better and still traveled about a length behind Get Smokin in second. Regal Glory winded up her move on the outside of the pair in third. Casa Creed remained in last, but Luiz Saez wisely guided him outside of Regal Glory for a clear shot. He only needed to pass four horses who were bunched together.

At the top of the stretch, Casa Creed had about two lengths or less between him and the lead, and he moved forward past Regal Glory, Masen and a fading Get Smokin to reach the front. With the lead in hand, Casa Creed finished strong toward the wire to prevail by 1 1/2 lengths over Regal Glory in second, with another half-length back to Masen in third. Get Smokin ended up fourth after the uncontested lead.

Casa Creed completed the one mile on turf in 1:34.20. As of this writing, the Beyer Figure is not currently posted on the Daily Racing Form Stakes Results page.

Before the Fourstardave, Casa Creed showed only one previous win at one mile, which came in the 2019 Hall of the Fame Stakes (G2) as a 3-year-old. Even with the poor win record at the distance, he finished third twice in the last two editions of this race against better horses. But his move always seemed to stall a bit.

Even though Casa Creed won this Fourstardave, it feels like he wants to compete in turf sprints more than one-mile turf races. The moderate pace and compact field gave a helping hand to Casa Creed in this situation, but his last two attempts at the Breeders’ Cup Mile indicate he will not enjoy a fast-paced Grade 1 mile with a full field. He can win a one-mile race only in the right situation.

Just look at Casa Creed's running line in the last two runnings of the Breeders' Cup Mile. He finished 12th in the 2020 Breeders’ Cup Mile and eighth in last year’s edition. The Mile is typically crowded with a fast pace, making it easy for Casa Creed to get lost in the shuffle and find himself too far behind early.

Regal Glory belonged in the Fourstardave as a contender. But she struggled to move forward in the stretch this time, as opposed to opening up to clear wins in her past few starts against graded-stakes females. Competing against males made a difference in the end, even if she finished second.

If the connections decide to aim Regal Glory for the Breeders’ Cup Mile, she would not necessarily feel out of place. Given her loss here, though, bettors should demand a better price on this mare if she goes in that direction.

Masen had a perfect trip tracking the leader Get Smokin. But when the time came to attack Get Smokin on the far turn, he stayed in his position rather than pull even and did not completely pass Get Smokin until past mid-stretch.

When Masen made his North America debut in the Maker’s Mark Mile (G1) at Keeneland, he turned in an excellent effort while finishing second to Shirl’s Speight. Yet trainer Chad Brown then chose to run Masen in easier spots at Belmont, where he won both the Seek Again Stakes and Poker Stakes (G3). Why did he drop down in class? Did Brown lose confidence in what he saw?

Given the loss in this spot after a perfect trip, Masen feels like a play-against if he ends up in another Grade 1 race next time.

As for Casa Creed’s value in future races, his price is normally decent for a past Grade 1 winner. Even after mowing down the field in the Jaipur Stakes (G1) at 10-1 last year, he offered value at 6-1 in the 2021 Fourstardave and 5-1 in the Turf Sprint (G3) at Kentucky Downs. But this year, maybe winning two Grade 1 wins in a row will change his value when he makes his next few starts. The public likes winners, especially multiple Grade 1 winners.

Give Casa Creed heavy consideration if he enters any six- or seven-furlong turf race. But if he enters another one-mile turf race, think about whether the field is compact with an expected moderate to slow pace.

If the one-mile turf race is crowded with a fast pace, then Casa Creed might find himself too far back. But with a smaller field and compact group of runners, he has a better shot at this distance.