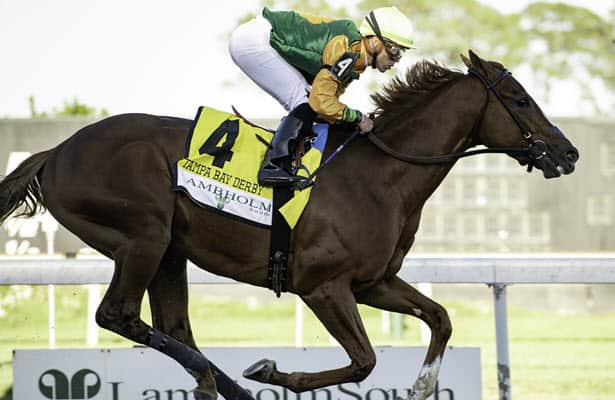 Classic Causeway won the Tampa Bay Derby (G2) Saturday by a comfortable margin over Grantham and Shipsational, earning 50 added Kentucky Derby points and effectively securing his spot in the big race. But there is a lingering concern with Classic Causeway’s figures.

As the replay shows, nothing out of the ordinary happened. Classic Causeway secured the lead before the first turn, maintained an advantage on the far side and opened up late to capture his second graded-stakes race by 2 1/2 lengths.

Meanwhile, the long shot Grantham saved ground on the first turn and took up the pocket position before outfinishing Shipsational for second.

To Shipsational’s credit, he broke sharper this time and found a nice spot on the outside to stalk the leaders. He began to inch closer on the second turn, but he could not sustain the move and finished third.

Golden Glider settled into a mid-pack position on the rail in the early stages. He moved off the rail heading into the far turn and tipped out in the stretch to set up his final rally, which resulted in closing into fourth late.

For winning the Tampa Bay Derby, Classic Causeway earned an 84 Beyer Speed Figure, according to Daily Racing Form. When he won the Sam F. Davis in February, he earned an 88. On Beyer figures, he regressed in Saturday’s win. As for a TimeformUS comparison, the Tampa Bay Derby figure is not posted yet.

In terms of raw final times, Classic Causeway finished the 1 1/16 miles in 1:44.90. Only a few races earlier, the previously unknown Scalder crossed the wire first in the Challenger Stakes (G3) in 1:43.53.

Granted, Classic Causeway has time to improve and move forward. But if he does not change soon, an 84 to 88 Beyer Figure is not going to cut it on the first Saturday in May against the country's best 3-year-olds. And he might face other speed horses up front who look hungrier for the lead, such as Forbidden Kingdom, Early Voting and Epicenter.

Can Classic Causeway run to his best speed figure in the Kentucky Derby, which appears average at this point in the current season, while withstanding those other speed horses lined up to weaken him?

Of course, there is always the chance that Classic Causeway only did what he needed to do. Beyers Speed Figures are based on final times. If a horse does not run fast on purpose, the time and Beyer Figure will reflect that.

From a handicapping standpoint, though, it is dangerous to assume that a horse is capable of running faster when no proof exists on paper. Where is Classic Causeway’s fast race as a router? At this point, it does not exist. Minus his big career debut speed figure, Classic Causeway runs good, but not great, numbers.

Classic Causeway needs to get faster and stronger with only about a month and a half left until the Kentucky Derby arrives. Is there another prep race in his schedule? He might benefit from a nine-furlong race.

Shipsational had a better chance to win this time after breaking well. If there is an excuse, he went wide on both turns and still fought for second valiantly in mid-stretch, although he ended up third at the wire. At this point, he needs to win a big race to prove he can. Perhaps he can step forward at longer routes, especially considering how he stuck around.

Golden Glider possibly fits the typical profile of a long-shot closer who blows up the Kentucky Derby superfecta by finishing underneath. He is not attractive as a realistic Derby win contender though. Even if Golden Glider runs in one more prep race and earns the points, deep closers always compete at a disadvantage in a 20-horse field because of traffic problems.

Either Classic Causeway is beating up on slow horses to win Derby points, or his Tampa Bay speed figures do not matter. The answer will come soon.