What we learned: Bulletin shows there's no lock in horse racing 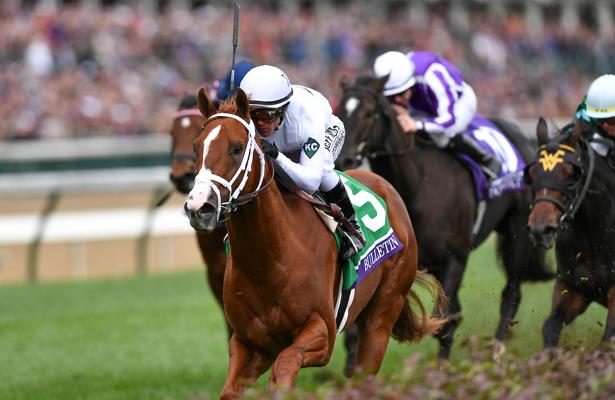 Chasing a heavy favorite below even money is pointless in most cases because the amount returned will not make the risk worth it, especially for the smaller player. Getting a $1 or $2 profit on a $20 win bet when the horse is below even is a waste of time. Even when paired with longer prices in exotics, the payoffs are too small to make the bet worthwhile.

Yet, the lack of a substantial return did not stop bettors Saturday night at Churchill Downs from betting on previously unbeaten Bulletin in the William Walker Stakes.

The public favors familiarity, and Bulletin is the reigning Breeders’ Cup Juvenile Turf Sprint winner. He also returned with an authoritative win at Keeneland earlier this month, giving bettors some confidence he did not lose form.

Those elements led to his 1-9 odds, and he disappointed backers by fading to fourth in the late stages after setting the early pace while pressured.

What makes Bulletin’s fade alarming is that Javier Castellano tried his best. He asked Bulletin to secure the front position coming out of the gate, kept pushing him on the turn and took out the whip even before they hit the top of the stretch. This is not one of those instances where the connections told the rider to take it easy. It looked like Castellano wanted an all-out effort, and Bulletin had nothing to offer.

Meanwhile, the 10-1 Jo Jo Air stayed on Bulletin from the start and began to hold the slight advantage when they turned. It took a while, but he won.

Uncapped came flying on the outside for second, and Legends of War hung in for third.

Besides the low win odds on Bulletin, there was a significant amount of show money on him, too, as Jo Jo Air paid a healthy $10 to show and Legends of War gave show bettors a generous $13 for the same wager.

The lesson here is to simply avoid 1-9 shots if possible. If the horse is part of an important horizontal sequence, then include him in those pick 4s or 5s. Otherwise, why play? Even the biggest favorite is beatable.

As another lesson, watch the show pools whenever a 1-9 horse runs. If bettors unload on the big favorite to show, then pick another horse such as Jo Jo Air or Legends of War to show, and hope for another strange result.

Kimari’s career debut as a 2-year-old last Thursday at Keeneland got racing fans talking, as she won by 15 lengths. It was amazing to watch in person from the press box, as the other horses were not even in frame when taking a personal picture.

It is too early to say how she will develop, and truthfully many precocious horses such as this one flame out at some point. But she is one to watch.

If nothing else, it was a nice way to help end the Keeneland meet.

Paradise Woods’ win in the Santa Margarita Stakes (G2) is getting dismissed by handicappers, but there are positive aspects to note about the return to form.

For one, Mike Smith initially took Paradise Woods wide on purpose in order to prevent her from dueling with Just a Smidge, who was intent on the lead. That means Paradise Woods won despite losing significant ground.

Oddly, the replay starts after the first turn...

She is the kind of mare that needs a hands-off approach, and by going wide it prevented Smith from needing to tug Paradise Woods back. Once she got into a nice rhythm, Smith engaged Just a Smidge with Paradise Woods on the far turn, and Paradise Woods was loaded.

Paradise Woods won by 10 1/2 lengths. Needless to say, Smith fits this mare well and trainer John Shirreffs should try to keep his services.

La Force plodded along for second. It is notable La Force owns two runner-up finishes to Unique Bella from last summer, including a half-length loss in the Clement L. Hirsch (G1). Even though the Santa Margarita field was not strong, she added some credibility.

The rest of the field was not only outclassed, but distance challenged as well. Most of the also-rans did not show any successful experience at nine furlongs.

How slow is the Santa Anita dirt surface playing?

Paradise Woods won the Santa Margarita in 1:51.95, which is not fast until looking at the other nine-furlong race on the card. El Huerfano won Race 4, a high-priced optional claimer, in 1:53.35. Notable horses Surfing Star and Route Six Six finished second and third in the race, making Paradise Woods’ time later on look excellent. She ran faster than good older horses on the same card.

If the slower track helps the horses stay safe, then the change in surface speed is logical. At the end of the day, there are winning horses and losers, no matter how fast or slow it is.

For handicappers, the speed figures are supposed to account for the difference, making the slower times irrelevant. Nothing changes in the handicapping process, and as Paradise Woods showed, speed is holding.

A summer of Soi Phet

Old favorite Soi Phet ran in the Crystal Water Stakes, and the result was not good. He faded to last after chasing the pacesetter.

The 11-year-old was making his comeback after going on a layoff since last September. On the positive side, Soi Phet did not lose by a huge margin, as the chart says 4 ½ lengths, but turf races typically result in smaller margins in general. Thus, 4 ½ lengths is actually a significant amount on there.

But Los Alamitos is starting in the summer, and perhaps Soi Phet only needs a few races to get the engine going before returning to his favorite racetrack.