What we learned: Bricks and Mortar takes Horse of Year lead 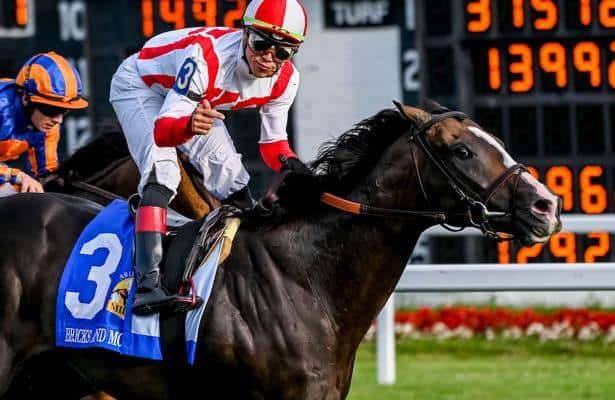 As expected, Bricks and Mortar won the Arlington Million (G1) yesterday. While he did not blow them away, the fact he keeps on winning is impressive. If there is a older horse star in North America, it is him.

The pacesetter Bandua opened in 24.45 and 48.65. Hunting Horn pressed Bandua in second, with Magic Wand right behind them.

From there, Bricks and Mortar only needed to find room when it came time for the real running. On the far turn, he moved up inside and waited patiently for a hole to open, and one did when Hunting Horn quit.

Bricks and Mortar then gradually mowed down Magic Wand and Bandua. Robert Bruce had too much work left and closed for a belated fourth.

But, what did we learn exactly? The public knows Bricks and Mortar is a talented horse, as (contrary to his 8/5 morning line) he started at 1-2.

At the moment, Bricks and Mortar is in the lead for Horse of the Year. Right now, he owns four Grade 1 wins, including the Pegasus World Cup Turf Invitational, Turf Classic, Manhattan and now the Arlington Million.

The award does favor dirt horses, but that is not a rule set in stone. The turf horse Wise Dan won Horse of the Year in 2012 and 2013, while the synthetic-based Zenyatta won in 2010. Voters reasoned Zenyatta owned more Grade 1 wins than Blame, even if they came on synthetic.

Right now, no other horse besides Bricks and Mortar owns four Grade 1 wins.

If Bricks and Mortar wins one more Grade 1, it will take a monstrous fall campaign and dirt-biased Eclipse Award voters to deny him the award.

Not every European Group 1 is equal

Intellogent received some attention leading up to the Arlington Million because of his close fourth in the recent Prix d'Ispahan (G1) behind Zabeel Prince, but not every Group 1 is the same. To prove this, Zabeel Prince went on to finish second-to-last in the Prince of Wales' Stakes (G1) and Sussex Stakes (G1), and last in the Coral Eclipse (G1).

Yet, Zabeel Prince won a Group 1 race. But with his flops afterwards in mind, it is hard to consider the Prix d'Ispahan a true Group 1 race.

With European horses, it is too easy for American handicappers to lump all Group 1 races into the same category. But, clearly not all of them are equal, just as not every Grade 1 race in North America is equal. It depends on the horses entered.

Therefore, it is no surprise that when Intellogent had dead aim at the top of the stretch, he could not keep up with classier horses in Bricks and Mortar, Magic Wand, Bandua and Robert Bruce. Intellogent eventually finished sixth.

What made Magic Wand different than Intellogent? She showed some questionable form too with an 11th in the King George VI & Queen Elizabeth Stakes (G1). But after watching the race, it became clear she chased a fast pace and folded. The jockey likely did not persevere with her late.

Plus, Magic Wand faced Enable and Crystal Ocean at their peak.

Magic Wand received the “Use underneath” designation in the Odds & Analysis piece because she kept losing, but her overall body of work felt more trustworthy than Intellogent or Pivoine, especially with successful past experience here in the North America.

In any case, it is something to keep in mind. Taking the time to research those Europeans more closely by studying records and watching YouTube replays makes a difference, as not every bettor will take the time.

Is Got Stormy the next Tepin?

Got Stormy earned a whopping 108 Beyer Speed Figure for winning the Fourstardave Handicap (G1) at Saratoga yesterday. In the process, she broke the track record. She always showed an affinity for one-mile turf races before, but now she is blossoming into a star for trainer Mark Casse.

But it is notable the entire race flow favored Got Stormy.

For one, Gidu set a suicidal pace, which set the table for the entire field.

Meanwhile, Got Stormy enjoyed a nice ground-saving first turn and settled in fifth, several lengths behind the insane Gidu.

On the far turn, Got Stormy easily tipped outside with no traffic. From that point, she only had to pass some tired horses in Gidu and Made You Look. With encouragement, Got Stormy made the lead and had enough separation to hold off the closers, winning by 2 ½ lengths.

Got Stormy enjoyed a perfect trip behind a supersonic pace to win.

Granted, her tactical speed will mean she enjoys a good trip more often than not. But it is still too early to give her the Breeders' Cup Mile.