What we learned: Bodexpress needs more after Clark win 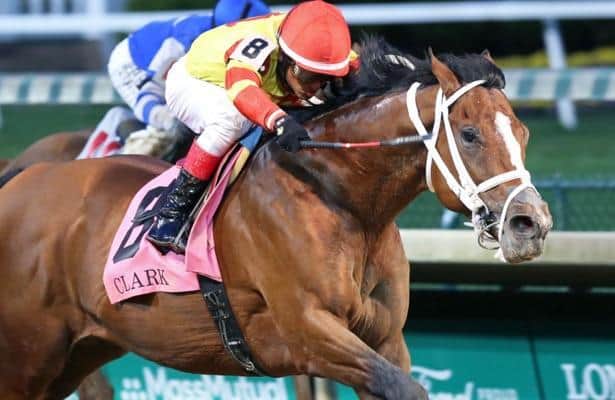 One year ago, Bodexpress held important momentum after breaking his maiden at Gulfstream Park West in mid-October and taking an allowance one month later by 6 3/4 lengths, eight months after his promising runner-up in the Florida Derby (G1).

Bodexpress then lost six races in a row after that November allowance, with the worst finish coming in the Gulfstream Park Mile (G2) when he ran last of 11 horses. Instead of developing into a top older dirt router, Bodexpress became stuck as that mischievous horse with gate problems who dumped his rider in the Preakness.

But after capturing the Clark Stakes (G1) at Churchill Downs on Friday, the momentum is back on Bodexpress’ side. This is an improved runner capable of demonstrating patience early before striking. But he does need one more step if he wants to capture more difficult races.

Here is a short recap of Bodexpress’ Clark trip.

Bodexpress breaks well, but he lets the long shot Phantom Currency take the lead and cross over him around the first turn. As Phantom Currency opens up by 1 1/2 lengths, Bodexpress shifts slightly to the right and takes up the tracking position in second.

The crowd near the front is packed as Bodexpress tracks the leader.

Time passes through an opening quarter in 23.39 and half-mile in 47.94. As Bodexpress continues to wait for the right moment while approaching the second turn, Mr Freeze starts to move inside and makes his way to the lead. Bodexpress follows along to the second spot, but in a very gradual manner.

Meanwhile, the favorite Code of Honor travels right behind those two horses. Also, Owendale winds up his move on the outside, and Coastal Defense tries a rail run.

At the top of the stretch, Bodexpress gets asked to run more aggressively, and he responds well enough. Bodexpress eventually inches clear of Mr Freeze to his inside. As that happens, Code of Honor and Owendale arrive with their rallies to Bodexpress’ right. But Code of Honor fails to run by the leader again after also failing to catch Complexity in the Kelso Handicap (G2). Owendale only follows along and fails to even pass Code of Honor for second.

Bodexpress wins by a one-length margin over Code of Honor, with Owendale and Coastal Defense completing the superfecta. As of this writing, the TimeformUS Speed Figure is not entered into the system, but Bodexpress does earn a 102 on the Beyer Figure scale.

The 102 Beyer is a bit short of the level Bodexpress needs to capture the best races in the male dirt routing division. In comparison, Global Campaign shows a 106 Beyer Speed Figure for his third in the Breeders’ Cup Classic and a 104 for his win in the Woodward Stakes (G1).

But another problem is the one-length margin. In dirt racing, one length is not a big difference between horses. Code of Honor, Owendale and even Coastal Defense could turn the tables next time on Bodexpress with a better trip or minor improvement in ability.

Still, Bodexpress is moving in the right direction with his Clark win, which marks his first Grade 1 victory in 17 career starts. He owns the right tactical speed and possibly now the mental attitude to turn into a consistently great horse. He only needs to make that one final leap in speed figures.

For a change in pace, the public let the 3-year-old filly Mrs. Danvers go off at value odds of 7/2 in the Comely Stakes (G3) at Aqueduct last Friday. Unfortunately for bettors against her, Mrs. Danvers finally put in the effort worthy of a future star.

Mrs. Danvers made her nine-furlong debut in the Comely. But on paper, Mrs. Danver’s pedigree fit the extra distance perfectly with Tapit on top and a dam whose half-siblings included War Front, Teammate and North Dakota. The last name on that list took the 1 3/8-mile Red Smith Stakes (G3) on turf only last weekend.

Now, count Mrs. Danvers as another two-turn winner in the family.

Watch Mrs. Danvers break well and cross over onto the lead. For horses exiting races one mile or less, it is not uncommon for them to show more speed at nine furlongs.

After the first turn, Project Whiskey suddenly contests Mrs. Danvers and puts a slight head in front through an opening quarter in 24.30.

Mrs. Danvers is not troubled by the tactics. She regains the lead after a half mile in 48.69. From there, she withstands another challenge from Gale on the far turn. Without even getting hit, Mrs. Danvers explodes from Gale by the top of the stretch.

In mid-stretch, Mrs. Danvers continues to open up impressively. At that point, Jose Lezcano uses the crop a few times, but he did not need it. She won by 6 1/4 lengths.

Ice Princess makes a mild late move for second. Four lengths behind her, Thankful follows along and manages to pick up third, while Toned Up passes Gale for fourth and finishes 5 1/2 lengths behind Thankful. The spaced out margins are a great sign.

As of this writing, the TimeformUS figure is not available. But Mrs. Danvers does match Bodexpress at Churchill Downs with a 102 Beyer Speed Figure. To put Mrs. Danvers’ 102 in perspective, Monomoy Girl shows only a 100 Beyer for capturing the Breeders’ Cup Distaff. Valiance took the Spinster Stakes (G1) with a 97.

If Mrs. Danvers sticks to two-turn routes longer than a mile, she can become a star. Expect this filly to break out as one of the major players in the Distaff division.

In the big 2-year-old races at Churchill Downs on Saturday, Travel Column closed from ninth to capture the Golden Rod Stakes (G2) by one length over Clairiere, while Keepmeinmind rallied from the same position to capture the Kentucky Jockey Club (G2) by 3/4 of a length over Smiley Sobotka. Both races were at 1 1/16 miles.

Right now, there is not a lot to say about either race, although Keepmeinmind did overcome a slower pace. Neither juvenile ran particularly fast, with Beyer giving Travel Column an 84 and Keepmeinmind a 79.

But these are developing 2-year-olds who could blossom into faster runners in a short amount of time. In particular, keep an eye on Clairiere, who finished second in a Grade 2 race in only her second career start. She might develop into a star, as could Travel Column.