What we learned: Baffert speed wins again in Sham Stakes 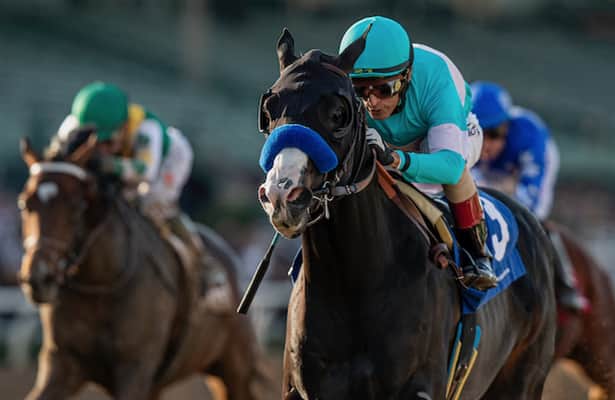 Although this lesson has been taught many times, a Bob Baffert-trained speed horse remains difficult to overcome in a Kentucky Derby prep if he manages to secure a comfortable lead.

In the case of the Sham Stakes (G3) Saturday at Santa Anita, the 5-2 third choice Newgrange took the early initiative to give trainer Bob Baffert his third straight pacesetting victory in this race following Authentic in 2020 and Life Is Good in 2021.

Newgrange broke well and went to the front under Baffert’s favorite jockey, John Velazquez. His stablemate and 3-2 favorite Rockefeller ran almost alongside Newgrange while giving him slight breathing room.

As stated before, there is nothing unusual when two horses from the same barn choose not to duel. But fair or not, it does affect the rest of the field when two stablemates control the early pace and create a mini-wall.

The long shot Degree of Risk took the wide route in third outside of Newgrange and Rockefeller, while Mackinnon ate dirt along the inside in fourth. About 1 1/2 lengths behind, Oviatt Class rounded out the tight group.

Newgrange set fractions of 24.46 and 48.94 seconds. At that point, it was easy to see he won the race as he continued to travel comfortably after the slow fractions. On the second turn, Newgrange began to separate from the field.

Mackinnon swung outside of Rockefeller. In turf racing, a good horse explodes after saving ground and tipping outside at the top of the stretch. When Mackinnon came out, though, he had nothing and spun his wheels.

Outside of Mackinnon, Oviatt Class started to move forward with a steady move, but at no point did he look like a serious threat. Right now, Oviatt Class gives the impression of a horse who keeps earning checks.

Newgrange finished off the race strongly for a 2 3/4-length win.

Can Newgrange make the Kentucky Derby with Bob Baffert as his trainer? Horses under Baffert cannot earn points on the Derby trail, which leaves him at 0 points. It will take a court decision or a switch in barns before a successful final prep race for Newgrange to enter the Run for the Roses.

Although he was no match for his stablemate, Rockefeller held second by a nose over a closing Oviatt Class and Mackinnon. Degree of Risk folded on the second turn and ended up last and 18 lengths behind Newgrange.

Expect Newgrange to pose a winning threat in his next prep race, even if he cannot earn points. Also, Oviatt Class should grind his way into the Derby field with second- and third-place finishes. Watch those two horses.

As Time Goes By backs up TimeformUS in La Cañada Stakes

On TimeformUS, As Time Goes By earned a 121 while taking the Bayakoa Stakes (G3) on Dec. 5 at Los Alamitos. In contrast, she earned only an 89 Beyer Speed Figure for the same race.

About 20 points separate TimeformUS and Beyer Speed Figures. If 20 points is subtracted from 121, that means the Beyer would fall around 101 or 100 if the two figure makers agreed on the Bayakoa speed figure.

Because As Time Goes by earned an 89 Beyer Speed Figure, though, that equaled a 32-point difference.

During the summer, As Time Goes By turned in some bad races and seemed to decline in form. Then the 121 on TimeformUS resembled her spring speed figures, while the 89 Beyer indicated a horse still finding her old spark.

As Time Goes By crushed the field in the La Cañada by 13 1/2 lengths.

Neither the TimeformUS or Beyer Figure are in their respective systems yet, but it looks like the TimeformUS figure was more useful in this instance.

In fairness, the lack of other route races on the Bayakoa Stakes card probably made figure making difficult. As Time Goes By also had to endure an extremely fast pace in the Bayakoa and became tired late.

There will be many instances in the future where it looks like the Beyer Speed Figure was the more useful number for handicapping purposes. In other races, the high BRIS Speed Rating might result in the right winner, while the high TimeformUS and Beyer Figure horses throw in clunkers.

It is great that handicappers get access to all types of past performances, pace figures and speed figures in today’s racing world. After looking at all the information and watching the replays, handicappers need to trust themselves to make the right decision and not simply follow the figures.

Numbers can only help, not lead.