What we learned: Baby Yoda shows not to rely on a big figure 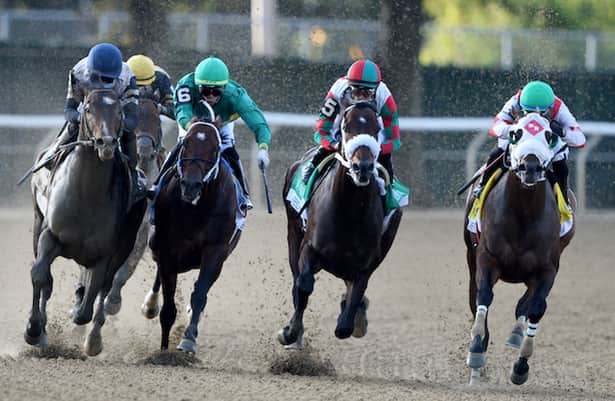 Following Sea won the Vosburgh Stakes (G2) at Belmont Saturday over Firenze Fire in second and the hyped Baby Yoda in third. Baby Yoda had brought lofty numbers from his Sept. 4 allowance win, including a towering 114 Beyer Speed Figure and 126 TimeformUS Speed Figure.

The problem is that the speed figure, whether using Beyer or TimeformUS, did not resemble anything in Baby Yoda’s three previous starts. The results gave bettors an important lesson in not blindly taking the horse with a big figure without considering the overall picture.

Baby Yoda had one big speed figure and three low figures relative to the Grade 2 level, although the previous speed figures were competitive for his prior class levels. The 3-year-old gelding broke his maiden in a claiming race at Pimlico before taking the next step by finishing a mild third in an optional claiming race on the same course. After the switch to trainer Bill Mott, Baby Yoda won a July 17 starter allowance by 1 1/4 lengths at Saratoga.

In those three races, Baby Yoda had posted a 96, 108 and 108 on TimeformUS. Daily Racing Form users can look up his past Beyers. The point of the lesson is the same, whether one uses TimeformUS or DRF.

Then, Baby Yoda made headlines by winning the Sept. 4 allowance by 4 1/4 lengths with the exceptional 114 Beyer Figure and 126 on TimeformUS.

Remember in Picking Winners when Andrew Beyer wrote, “Even if a horse has run a big figure in his last start under seemingly normal conditions, I will hesitate to bet him based on one exceptional performance.”

Here was an example of a horse who ran a big speed figure in his last start under normal conditions, and he opened as the unsavory favorite. At post time, Baby Yoda did drift to 3-2, with Firenze Fire at even money.

In fairness to Baby Yoda, as a 3-year-old gelding with few starts, one could make the argument he was an improving runner with an unknown ceiling. Perhaps the switch to Mott did something to help him improve.

But the leap from Baby Yoda’s starter allowance effort to his Sept. 4 race was drastic enough that it felt right to doubt whether he could duplicate it in his next race. After all, how could a former maiden claimer rise to such heights in such a short amount of time?

Firenze Fire had the proven class as a multiple graded-stakes winner, although he kept running the same mild speed figures over and over again.

Following Sea fell somewhere between the two horses with limited graded-stakes experience in the Haskell Stakes (G1) and H. Allen Jerkens Stakes (G1). Even though he had disappointed in those races, he had displayed talent in his dominating maiden and allowance wins.

At the start of the Vosburgh, Following Sea took control of the front. Firenze Fire went outside of Following Sea, while Baby Yoda ate dirt on the inside.

Following Sea continued to move easily on the turn.

Good Effort made a brief move while approaching the turn; otherwise, nothing else changed. Baby Yoda needed an opening on the inside. He did not give the impression of a horse waiting to explode, but rather one who was only keeping up with the horses surrounding him.

When the four horses made the top of the stretch, they were still close together, but Joel Rosario on Following Sea was playing possum with the rest of the field. A path opened on the rail for Baby Yoda, if he had the run to push through it.

Baby Yoda had no response when the hole came up. He kept running in the same position, even when Following Sea had moved to the three path.

Rosario finally gave Following Sea the cue, and he drew clear under a hand ride. Once clear, he went back toward the rail in front of a struggling Baby Yoda. Firenze Fire continued to plug along, but he could offer no challenge for Following Sea, although he began to separate from Baby Yoda late as he crossed the wire in second.

Following Sea won by a dominant 4 3/4 lengths over Firenze Fire. The TimeformUS Speed Figures for the Vosburgh were not available as this was written, but he probably ran back to his impressive June 3 allowance win over this course. For those who use Beyer Figures, Following Sea earned a 100.

Could Baby Yoda eventually prove himself at the graded-stakes level with another impressive speed figure? Sure. After all, this is a young horse.

As a bettor, though, it feels right to ask Baby Yoda to repeat his big Sept. 4 speed figure, no matter which brand handicappers use, before trusting him at this level again.

Rattle N Roll closed nicely to win the Breeders’ Futurity Stakes (G1) at Keeneland under jockey Brian Hernandez Jr. for trainer Ken McPeek. He crossed the wire in front by 4 1/4 lengths over Double Thunder in second.

The second blog choice Classic Causeway faded to third at 9-5 after controlling the pace, while the top pick Don’t Wait Up folded to a dismal last after traveling in a stalking position through the first half.

To make this short, the lesson here is that sometimes a slow pace makes it difficult to assess a horse’s ability. In Rattle N Roll’s Sept. 23 allowance win at Churchill Downs, he closed for a three-length win after overcoming slow fractions of 24.56, 49.38 and 1:14.63 for the 1 1/16-mile race.

Either the pacesetter Ignitis and presser Ten Gauge both had no late punch, or Rattle N Roll showed talent to overpower both horses late.

In the Breeders’ Futurity, Rattle N Roll had a little more help from the pace as Classic Causeway set early fractions of 22.81, 46.74 and 1:11.90. In addition to Don’t Wait Up folding to last, the presser Stellar Tap faded to seventh and the initial third-place horse Mr. Bouma faded back to sixth.

Even though he took advantage of the pace, the future does look bright for Rattle N Roll at the moment. Look for him to make noise on the Derby trail.