What we learned: Authentic unbeatable when he secures lead 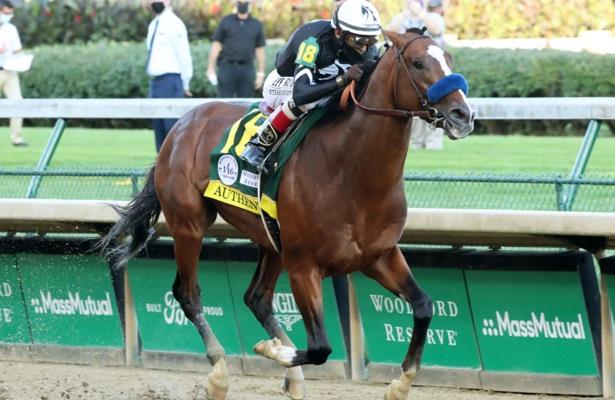 Every Kentucky Derby season comes to an end at some point. This one took longer to reach its conclusion, but it finally did when Authentic crossed the wire first in a mild upset over the favorite Tiz the Law after leading from the first turn to the wire.

To many handicappers, Authentic’s win came as a surprise after his loss to Honor A. P. in the Santa Anita Derby (G1) and narrow victory over Ny Traffic in the Haskell Stakes (G1), both nine-furlong races. Questions began to arise about his stamina, especially with Into Mischief as the sire and no real counterbalance on the bottom side of his pedigree.

Sometimes talent and a good trainer such as Bob Baffert overcome inherent distance limitations in a top horse.

Of course, a good trip is required as well.

Below is a description of the trip for Authentic and some commentary afterwards, as well as the same for Tiz the Law, Honor A. P. and selected also-rans.

Authentic surprisingly broke slow, allowing Tiz the Law to move into his path briefly. Both of them made a diagonal move left to join the field. But instead of settling for a wide spot, Authentic kept moving left until he found himself in the lead by the first turn.

Storm the Court, Ny Traffic and Tiz the Law all let Authentic cross over through an opening quarter in 22.92, before a moderate (by Derby standards) half-mile in 46.41. As he set the pace, Authentic held a one-length margin over Ny Traffic, making the pace scenario initially resemble their matchup in the Haskell Stakes (G1) at Monmouth.

From there, Authentic set a good but moderate tempo by hitting the six-furlong point in 1:10.23. At this point, Ny Traffic gave up the chase and began to lose ground. After Ny Traffic's retreat, Tiz the Law began his challenge a few seconds later and ran right alongside Authentic around the turn. The two stars hit the top of the stretch together.

Because Authentic held the lead for most of the race, it likely gave him the confidence to repel Tiz the Law in the final part of the race. Under left-handed strikes from John Velazquez, Authentic kept finding more and gradually took a small advantage over him in midstretch. He eventually won by 1 1/4 lengths over a hard-trying Tiz the Law.

Authentic ran a final time of 2:00.61, which is difficult to compare with the May editions of this race as the track was playing fast.

As of this writing, the TimeformUS Speed Figure is not in. However, Authentic did earn a 105 Beyer Speed Figure, which is the best Derby performance since 2009, according to a DRF tweet. No matter what the number, Authentic put in a great effort to overcome the post position, secure the lead and hold off a talented colt in Tiz the Law late.

If Authentic secures the lead in the Preakness, the race is his again.

As stated above, Tiz the Law began his journey a bit outward into Authentic’s path, before making the inevitable diagonal left turn and reaching the front pack.

Tiz the Law took up the path in front of Attachment Rate and alongside Ny Traffic while running three or four wide on the first turn. For most horses, losing ground on the first turn is a concern. However, Tiz the Law wants to run wide in the clear. His only loss came in the pocket.

From there, Tiz the Law bided his time in fourth as Authentic set those relatively moderate fractions in front of Ny Traffic and Storm the Court on the inside.

On the turn, Tiz the Law made his usual move and met Authentic in the eye by the top of the stretch. Surprisingly, Tiz the Law did not get by Authentic. Under right-handed strikes from Manuel Franco, Tiz the Law spun his wheels and lost ground.

For the first time, Tiz the Law did not convert a clear outside rally into a victory. Instead, he ended up 1 1/4 lengths behind in second, and two lengths clear of the third-place Mr. Big News. Other than losing, nothing really went wrong for Tiz the Law.

A couple of people mentioned bouncing off the Travers win or racing 1 1/4 miles twice in two months as reasons for Tiz the Law’s loss. Is a reason required? Tiz the Law turned in a good effort and just failed to outkick a sharp Baffert pacesetter.

When Ny Traffic under Paco Lopez came out into Honor A. P.’s path at the start, Honor A. P. supporters became frustrated quickly.

After the slight incident, jockey Mike Smith gave a moderate pump or two before easing up and letting Honor A. P. slip towards the back of the field by the first turn. Through a moderate half-mile in 46.41, Honor A. P. ran wide and last by 11 lengths in an impossible early position, considering the lack of a real Derby pace up front.

Perhaps Honor A. P. did not handle the track in the opening half-mile. On the far turn, Honor A. P. ran more smoothly and finally started to pick off horses while still wide. By this time, though, Authentic and Tiz the Law began their separation from the field and made it harder.

As Authentic and Tiz the Law gave a terrific battle in midstretch, Honor A. P. was stuck in the midpack portion of his rally. He did his best to pass more horses in the stretch, but time ran out for the son of Honor Code. He did not even catch third as Mr. Big News held position.

Honor A. P. is in the same league as the Top 2. The poor start and deep closer position left him with almost no chance. He continuously made up ground, though in a gradual manner.

If trainer John Shirreffs wants one more prep race before the Breeders’ Cup Classic, the 1 1/4-mile Jockey Club Gold Cup (G1) is a better fit for him than the Preakness Stakes. Wherever he runs next, he figures to contend as a top contender at nine furlongs or farther.

Mr. Big News outran his 46-1 odds and gave his connections the thrill of a lifetime in the process by making an eye-catching move and finishing an excellent third.

How did he reach that point?

Despite settling in 10th, Mr. Big News traveled only 7 3/4 lengths off the pace in the initial quarter. He was smack in the middle, with breathing room in front and in back.

On the turn, Mr. Big News wound up his run on the outside and went past a tired midpack group and Ny Traffic to secure third. For a few moments, winning became a small possibility.

But Authentic and Tiz the Law asserted their class in the stretch run and opened up. Mr. Big News’ rally stalled in third, and he remained in that position. If nothing else, he outkicked Honor A. P. for third, although with a far better initial position.

Given the low expectations, Mr. Big News turned in a great effort.

The reigning Breeders’ Cup Juvenile champion receives a shoutout for outperforming expectations. I had mentioned him as a firm tossout.

After traveling inside through the early stages, only a length or two behind Authentic and Ny Traffic, Storm the Court did not pose a threat in the stretch. But he did keep fighting and held on for sixth.

Considering he still beat nine other horses, he deserves a look next time. But it does feel like he needs a confidence booster to get him back on the right track rather than another difficult Grade 1 race.

Yes, the backwheel key of this blog ran poorly.

The initial position for Attachment Rate was fine, although a bit wide. Perhaps Tiz the Law gave him minor trouble by taking his path in front going into the first turn.

On the far turn, when Mr. Big News easily ran past Attachment Rate, the end came near, as it is never a good sign to see a closer lose position that late in the race. The ironic part is that Attachment Rate outran Mr. Big News for fifth in the Blue Grass Stakes (G2). Yet, he had nothing in the Derby.

Perhaps he rebounds elsewhere, in an easier race than a Grade 1.