What were the biggest overlay and underlay of 2022? 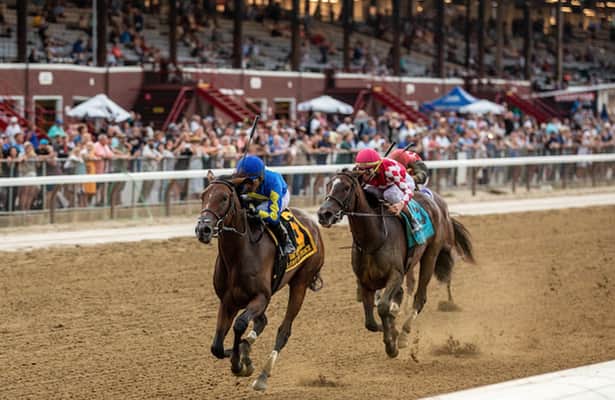 This year brought some wild results not only in the race results but in the final pools. Horseplayers saw plenty of great examples of overlaid and underlaid horses during the year, and some examples were extreme.

Here is one example of each.

From a personal standpoint, Leave No Trace sticks out as one of the blog choices who went off at unexpectedly high odds relative to her form and won. On paper and visually, she did not look like a double-digit odds filly.

Before the Spinaway, Leave No Trace broke her maiden locally at Saratoga in a 5 1/2-furlong sprint with a 93 TimeformUS Speed Figure.

The 93 was not the highest number using those speed figures, but it put this filly as the fourth highest and in the mix with Kaling, Just Cindy, Wonder Wheel and Aunt Shirley as fillies with a TimeformUS figure higher than 90.

Plus, the way Leave No Trace won at first asking to break her maiden was impressive. After stalking the leading trio, Irad Ortiz Jr. guided the filly outside for a clear run under mild urging at best and she started to open up in the stretch run.

One closer named Stellar Lady came to pick up second and reduce the final margin to 2 3/4 lengths. But notice she had 10 3/4 lengths on the third-place filly. Spaced-out margins usually indicate a quality race.

Leave No Trace had all the markings of filly who felt right around 9-2 to 6-1 in the Spinaway off a nice maiden win. Yet the public let her float up to an overlaid 14-1.

In the Spinaway, Jose Lezcano gave Leave No Trace a simple trip of stalking the pacesetter Naughty Gal. Leave No Trace then took over on the turn and held off both the 7-5 Wonder Wheel and 7-2 Kaling in the stretch for the win.

Fenwick was not the only underlaid horse in this race. Happy Jack also went off at an equally puzzling 11-1, but at least he had graded-stakes placing in his resume because of the short fields in the Santa Anita prep races.

What gave Fenwick the right to go off at 13-1 in the second leg of the Triple Crown? Fenwick competed in the Blue Grass Stakes (G1) at Keeneland in April, but he ran last by 36 lengths in the 11-horse field.

Before the Blue Grass, Fenwick broke his maiden at Tampa Bay by 5 1/4 lengths over Commandperformance. But he beat a lesser version of Commandperformance who did not resemble the promising Todd Pletcher-trained colt who closed for second in the Champagne Stakes (G1) in 2021.

In Fenwick’s three races before the Tampa Bay maiden breaker, he finished off the board three times, including last-place finishes at Aqueduct and Fair Grounds. How did he ever break his maiden at Tampa?

The public made Fenwick 13-1 in the Preakness, and it will go off as one of the strange oddities of 2022. For bettors to think he was that close in ability to runners such as Early Voting and Epicenter can only be labeled as bizarre.