Kentucky Derby: What's the best scenario for each speed horse? 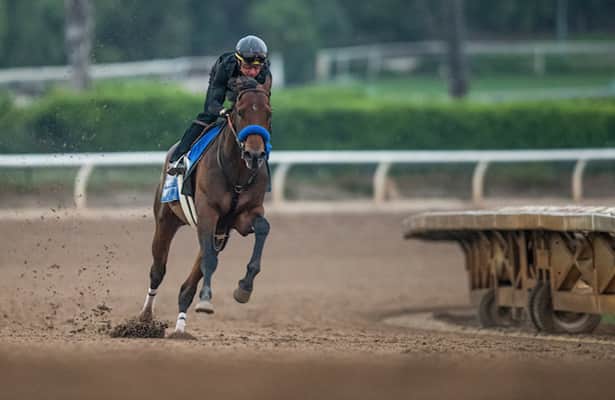 Less than a week remains until the 148th Kentucky Derby. The number of speed horses lined up became clearer when trainer Chad Brown said he would Early Voting would skip the Derby and point to the Preakness.

Here is a list of four Derby speed horses expected or possible to enter, and the scenario needed to happen for each of them to succeed. What is the perfect trip for each major speed horse?

The great part about Epicenter is his versatility.

Then in the Louisiana Derby (G2), Epicenter waited in the pocket position on the inside before tipping out for the final blow.

Epicenter did not mind at all taking dirt on the inside.

Even though Epicenter did not win the Lecomte Stakes (G3), he kept fighting late and lost by a only head to Call Me Midnight after enduring a fast opening quarter under pressure from Surfer Dude early.

It seems clear Epicenter could win from anywhere up front. If jockey Joel Rosario decides the pace is too hot, then an ideal spot for him is another pocket trip or outside stalking position right behind the leaders. In the scenario that Rosario does go after the lead, Epicenter can fight.

Some of Messier’s form leading up this race resembles Medina Spirit.

Medina Spirit’s lone win on the Derby trail last spring came in the Robert B. Lewis Stakes (G2) after setting a fast pace and holding on in the stretch against two closers. Medina Spirit then lost his next few starts without the lead, but he crossed the wire first in the Kentucky Derby after reverting back to pacesetting tactics under John Velazquez.

Likewise, Messier won this year’s Robert B. Lewis after setting a contested pace with moderately fast fractions. In contrast to Medina Spirit, Messier opened up and crossed the wire first by an astonishing 15 lengths and huge 127 TimeformUS Speed Figure.

In the Santa Anita Derby (G1), Messier went into a chaser role while the speedy Forbidden Kingdom set the pace. Messier did well to overtake the tired Forbidden Kingdom and briefly lead into the stretch, but his inexperienced stablemate Taiba went by him late to win by 2 1/4 lengths.

Similar to Medina Spirit, Messier’s best chance is to set the pace. If Messier receives a Medina Spirit-type trip from John Velazquez and secures the lead, he might get brave in the stretch and fight off all late challengers in the same fashion as Medina Spirit last year.

If Messier stalks the pace, he still could run well. But the chances of a horse passing him late increase if Messier uses conservative tactics.

Classic Causeway has won all his races by either setting or pressing the pace. Is he fast enough to secure the lead in this spot?

In the Kentucky Derby, Classic Causeway seems likely to fold again if he sets the pace, as speed horses such as Summer Is Tomorrow, Messier and Epicenter all are possible early challengers.

Unless he does a complete reversal and puts up a fight under pressure, Classic Causeway probably cannot win by setting the pace. But if the connections want a small chance at hitting the bottom of the superfecta, maybe Classic Causeway can revert to the stalking tactics seen when he finished second in the Kentucky Jockey Club (G2) last fall.

He is still considered a horse to ignore by this blog.

Analyzing Summer Is Tomorrow is tough because most of races came at Meydan Racecourse in Dubai. But the fact is that UAE Derby (G2) runners end up struggling for the most part when they attempt the Kentucky Derby.

Summer Is Tomorrow set the pace in the UAE Derby before fading late and finishing second to Crown Pride. In most of his other races, the notes on the right of the running lines indicate he was sent to the lead.

This Summer Front colt is likely a need-the-lead type in the same vein as Forbidden Kingdom. It seems that there is no other option for the connections other than ordering the jockey to send him.

If Summer Is Tomorrow could not hold on at Meydan against Crown Pride, then how is he going to handle the best 3-year-old dirt horses in North America after battling with them for the lead early?

The task seems impossible on paper.

With that point in mind, there is likely no chance Summer Is Tomorrow can win or hit the board, no matter what tactics this invader uses.

His trainer, Bhupat Seemar, has a different take. Click here to watch his interview with Horse Racing Nation.