Weekend Plays: Victim of Love a backwheel option in Ballerina 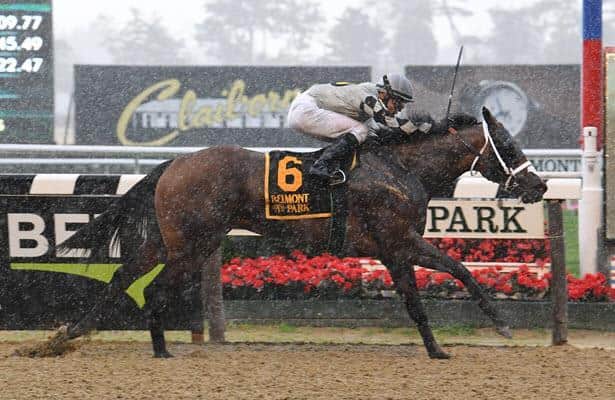 Earlier in the week, the Travers Stakes (G1) and Test Stakes (G1) at Saratoga were covered on this blog. Now, it is time to analyze the remaining stakes races on the same card.

The first of three races to discuss is the Grade 1, $300,000 Ballerina Stakes, which brings together a few popular fillies and mares that each have flaws.

For those who wish to play the race vertically, the race looks like a good situation to attempt a backwheel. What is a backwheel? It is when the bettor keys a horse in second or third underneath multiple horses, rather than use the traditional pyramid structure.

The backwheel candidate is Victim of Love, who leads off the three selections on the Travers undercard.

Victim of Love upset Come Dancing at 27-1 in the June 27 Vagrancy Stakes (G3) at Belmont. She even won by a decent margin of 1 ¾ lengths over the favorite.

Earlier in the year, Victim of Love also finished a good second after briefly leading in the Barbara Fritchie Stakes (G3) at Laurel Park. On the same course, she picked up a 3 ¾-length win in the What a Summer Stakes over Needs Supervision.

For the Vagrancy win, Victim of Love earned a career-high 115 TimeformUS Speed Figure and 99 BRIS Speed Rating. For those using BRIS past performances, the latter figure is the high last-race number.

Are those speed figures good enough to win though? On their best days, Serengeti Empress, Bellafina, Come Dancing and even Letruska are capable of better figures. But the problem with picking one of them is that all four of those entries bring flaws and questions to the table.

Serengeti Empress folded despite securing the lead in the Fleur de Lis Stakes (G2), bringing doubts about her current form. Perhaps she is not the same mentally? She used to give a fight at least after leading.

Bellafina always breaks slow when not in California. Why?

The defending champion Come Dancing lost to Victim of Love. Is that Come Dancing’s current and final form, or is she capable of better?

Letruska only wins after setting the pace, which is Serengeti Empress’ same problem. Cutting back to seven furlongs, can Letruska switch to a stalker role? Does she know how to pass horses?

Victim of Love figures to settle a few lengths behind the leaders. If the pace is grueling enough to eliminate some of the more popular names, Victim of Love can make a mild move on the turn and pick off some tired horses to spice up the exotics.

Here are the suggested plays:

Those afraid of Victim of Love winning can also make a small win bet.

Most of these entries are not true graded stakes runners, except for Imprimis and Pure Sensation.

Lonhtwist finished a non-threatening sixth in the Jaipur Stakes (G1) at Belmont. Prior to that, he also finished tenth in the First Defence Stakes.

Shekky Shebaz was third in the Wolf Hill, two lengths behind American Sailor. Without the help of former trainer Jason Servis, this gelding is not the same.

Chewing Gum and Pulsate closed for third and fourth in an optional claimer at Belmont.

The 9-year-old Pure Sensation is getting up there in age. He started off his campaign by dueling with Hidden Scroll in the Jaipur before fading to seventh. In this spot, he figures to duel or press American Sailor on the inside.

With Pure Sensation possibly pace compromised, only Imprimis is left.

Imprimis closed for sixth in the Breeders’ Cup Turf Sprint in his previous start. Prior to that, he closed for third in the Woodford Stakes (G2) at Keeneland. As mild as those two efforts look, they came against better company and a repeat of the Keeneland race will win against this group.

Mrs. Sippy is the deserving favorite off her runner-up finish to Sistercharlie in last year’s Flower Bowl Stakes (G1). But she is also coming off a significant 280-day layoff and a poor race in the Breeders’ Cup Filly & Mare Turf, where she ran ninth.

As frustrating as My Sister Nat has been on this continent, this might be her race to finally pick up a win for trainer Chad Brown.

My Sister Nat closed for second in the New York Stakes (G2) at Belmont, 5 ¼ lengths behind Mean Mary. The margin is forgivable because Mean Mary coasted on an uncontested lead on a slow pace.

Last year, My Sister Nat also closed for second in the Long Island Stakes (G3), losing by a neck to Si Que Es Buena. In three other starts that year, she finished third twice in Belmont optional claiming races and only missed the board once.

Assuming Mrs. Sippy needs one race off the layoff, My Sister Nat can close and win by default without any pacesetter in the same vein as Mean Mary present to steal the race. My Sister Nat is the choice.

Mott disciple is on his own and ready to go in Hong Kong
It is testament to Pierre Ng’s ambition and talent...