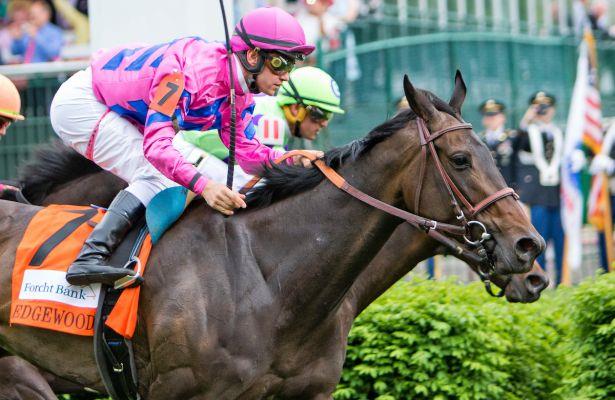 Rushing Fall and Jolie Olimpica headline the Grade 1, $350,000 Jenny Wiley Stakes on Saturday at Keeneland. But even though both are obviously talented, the former exits a soft Belmont stakes race where she enjoyed a comfortable lead, while the latter tries a longer distance.

Bettors are right to search elsewhere.

Why not Toinette for an upset? She leads off the five July 11 selections, including the Keeneland stakes pick 4 and the Delaware Handicap (G2).

Toinette has defeated Rushing Fall before at the same 1 1/16-mile distance. The upset came two years ago in the Edgewood Stakes.

Two years later, Toinette remains in good form. In her most recent comeback, she took the Wilshire Stakes (G3) by 2 ¾ lengths at Santa Anita after stalking a slow pace, while earning an unadjusted 97 on TimeformUS. Because of the extreme pace scenario, TimeformUS decided to award Toinette a 112 figure to better reflect her ability.

The 112 is still below the usual figures of Rushing Fall, Jolie Olimpica and Juliet Foxtrot. But, speed figures do not always mesh well with turf.

In this spot, Toinette figures to get a nice position right behind those three names, who all own pacesetting speed. If the pace heats up enough, Toinette is capable of mowing all of them down in the stretch.

Toinette's rider Flavien Prat is the best active turf jockey and figures to give Toinette a great ride. Also, according to TimeformUS, trainer Neil Drysdale has shipped to Keeneland once over the past year and won.

At a minimum, Toinette is usable alongside the favorites.

Real News is 15-1 on the morning line. Is that accurate?

All three of his turf sprint efforts last year are solid, and that includes two optional claiming wins and a runner-up finish in the Palisades Turf Sprint Stakes to Bulletin.

This year, Real News started off by winning the Frontier Utilities Turf Sprint Stakes. He took a few months off and returned in a May 29 turf sprint allowance at Churchill Downs, where he could only manage a non-threatening fourth to Extravagant Kid, four lengths behind.

Watch the replay though. On the far side, Real News loses his action and falls back a few lengths, while interfering with Totally Boss.

Real News remained interested and got back into a good rhythm. He passed some horses in the stretch run to complete the superfecta. Given the sudden stop, it is a great sign he wanted to come back.

Yes, Real News finished behind Extravagant Kid and Leinster in that May 29 race, but he never had a fair chance. Notice that Real News defeated Fast Boat in the Frontier Utilities Sprint Stakes, and Fast Boat won by 4 ¾ lengths in a Churchill Downs turf optional claimer on June 12.

Real News is the main choice.

This is a straightforward race involving a heavy favorite in Venetian Harbor, who holds the class, pace and form advantage.

Earlier in the year, Venetian Harbor won the Las Virgenes Stakes (G2) gate to wire and then followed the effort with a runner-up finish in the Fantasy Stakes (G3), while only giving up the lead to Swiss Skydiver.

Swiss Skydiver is the leader of the division. She takes on males in the Blue Grass Stakes (G2) one race after the Ashland.

In this spot, there is no filly fast enough to give Venetian Harbor significant pressure. She figures to secure an uncontested lead.

Once Venetian Harbor secures the lead with at least a length or two of separation, she wins.

For bettors who insist on a second option, Bonny South is the logical B or C to throw in based on her strong win in the Fair Grounds Oaks (G2).

On May 27, Art Collector closed strongly to take a seven-furlong optional claimer at Churchill Downs by 2 ¾ lengths over familiar names in Toledo and Wrecking Crew.

Next, Art Collector built upon the effort in his June 13 optional claiming win on the same course, leading a four-horse field by default and pulling away in the stretch run for a 6 ½-length victory. The second-place horse, Shared Sense, returned to win the Indiana Derby (G3) only a few days ago. Also, the third-place Finnick the Fierce had previously run third in the Arkansas Derby (G1) behind Nadal and King Guillermo.

Art Collector owns the tactical speed to sit right behind Shivaree and Swiss Skydiver. Once they tire out, Art Collector can strike first.

Art Collector is the main choice.

If anyone wants a second option, Rushie is capable off his third-place finish behind Honor A. P. and Authentic in the Santa Anita Derby (G1).

Who will contest Bellera on the lead in this race?

Dunbar Road is obviously a talented and deserving favorite. Perhaps she overcomes the pace scenario on class alone. With that said, she is a midpack type runner and unlikely to provide a huge amount of pressure.

Vexatious and Always Shopping own some speed and quality, but those two entries are supposed to run in the Ruffian Stakes (G2) at Belmont.

Bellera is not the best horse, but if the connection opt to use her speed, she can secure an uncontested lead and steal this race. She is the choice. At a minimum, she deserves a spot alongside Dunbar Road.