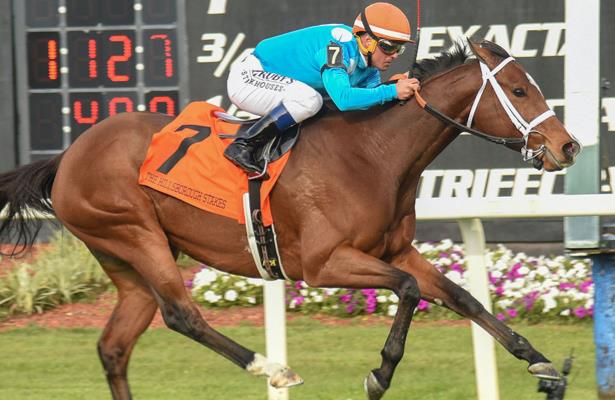 Sistercharlie returns in the Grade 2, $200,000 Ballston Spa Stakes at Saratoga on Saturday, and it is time bring some skepticism to the champion’s chances. After all, Saratoga is labeled as the “graveyard of favorites,” which means nothing is certain on this racecourse.

One interesting alternative is the 7-year-old mare Starship Jubilee, who carries a three-race win streak, although she does enter off a layoff.

Before taking a break, Starship Jubilee started off her season by winning the Sunshine Millions Filly and Mare Turf Stakes, Suwannee River Stakes (G3) and Hillsborough Stakes (G2), and she left no doubt in each race of the best horse.

Starship Jubilee won the Sunshine Millions Filly and Mare Turf by setting the pace and pulling clear in the stretch to win by 3 ¼ lengths.

In the Suwannee River, Starship Jubilee switched to a midpack running style and closed from five lengths off the pace to for a 4 ¼-length victory under a confident ride.

Then in the Hillsborough, Starship Jubilee stalked the leading pack in fifth or sixth, only 2 ½ lengths off the pace according to the running line. She closed for a 1 ¼-length win, which is still a clear margin because margins are compressed on turf.

With all her success over the years and recently, it is hard to believe Starship Jubilee began as a claimer in 2016, and once dipped down for a $16k tag in 2017.

Sistercharlie is the obvious class of the field. Only last year she won the Diana Stakes (G1) on this course, Beverly D. Stakes (G1) and Flower Bowl Stakes (G1) before a somewhat disappointing third-place finish in the Breeders’ Cup Filly & Mare Turf.

However, a top-tier horse such as Sistercharlie is typically tuned up for Grade 1 races, not a Grade 2. Perhaps she needs one warm-up effort.

Even though the talented Volatile lacks graded stakes experience, his only two starts this year are too good to ignore.

In an April 24 Oaklawn optional claimer, Volatile pressed the pace before drawing away in the stretch under a handride by 7 ½ lengths. He earned a 119 TimeformUS Speed Figure for the effortless win, his best figure in four starts at that point.

Volatile quickly topped that figure though in the June 6 Aristides Stakes at Churchill Downs. In this start, he stalked the pace in third before taking over on the turn and drawing clear for an eight-length victory. When Ricardo Santana Jr. asked Volatile for run, he looked like a rocket.

For this romp, Volatile earned a 124 on TimeformUS, adjusted down from a 130 because of the slow pace scenario. The only knocks are that he moved awkwardly in the stretch run and switched leads a bit late.

Whitmore, Firenze Fire and Mind Control are nice sprinters, but they do not offer the raw talent that Volatile brings. Volatile is a single.


Thanks Mr. Eidson is the narrow choice by default.

Vertical Threat broke his maiden by six lengths with a 110 on TimeformUS, but the effort is suspicious because it came at Los Alamitos.

As for Thanks Mr. Eidson, he flashed some ability last summer by setting the pace in the local Best Pal Stakes (G2) before fading to fourth late.

Perhaps Thanks Mr. Eidson could move forward on the return to dirt. He is the preferred option given Vertical Threat is unproven and Ragtime Blues is not that talented.

Laura’s Light enters this race in sharp form off her victory in the Honeymoon Stakes (G3) at Santa Anita. She also won the Sweet Life Stakes in February and Blue Norther Stakes back in December.

Is that kind of experience enough for a Grade 2? In this case, yes. This field is comprised mostly of local fillies and one outsider in Cheermeister, who brings plenty of speed into the pace scenario.

Cheermeister is playable as well. But her one-dimension style is a concern as she always wins her races on an uncontested lead.

On the cutback to one mile, Laura’s Light can use her tactical speed to press the one-dimensional Cheermeister or sit right behind her.

Even as the favorite, Laura’s Light is the main choice.

Midcourt is a 5-year-old gelding capable of big efforts here and there.

On this course, he took the Native Diver Stakes (G3) by 5 ¾ lengths last November with a 123 TimeformUS Speed Figure.

He also won the San Pasqual Stakes (G2) at Santa Anita back in February by 3 ½ lengths with another 123 on TimeformUS.

In the Hollywood Gold Cup (G1), Midcourt threw in a clunker losing by double-digit lengths. The blinkers come back on though and he switches back to Del Mar, a course he is currently 2 for 2 on.

Midcourt is the choice to upset Maximum Security.

Watch the tote board to see if there is a brigejumping situation where over 80 percent of the show pool falls on Maximum Security.