Weekend Plays: Spice Is Nice in the Gulfstream Park Oaks 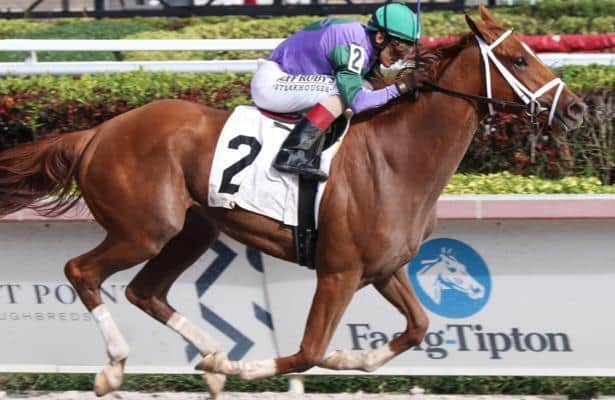 When Tonalist's Shape and Spice Is Nice met last time, the former beat the latter by 1 ¼ lengths. But different race conditions and slightly better value amount to giving the runner-up another look in the Grade 2, $200,000 Gulfstream Park Oaks. On Saturday, the two 3-year-old fillies will compete around two turns at 1 1/16 miles.

With the longer distance and stakes experience under her belt, Spice Is Nice leads off the five selections on the Florida Derby (G1) undercard.

As stated above, though, she now tries a longer distance at two turns as the favorite. One of the oldest handicapping rules is playing against a favorite trying something new, whether it's the distance or surface.

In fairness, Spice Is Nice makes her two-turn debut as well. But this is a daughter of Curlin out of the Bernardini mare Dame Dorothy. Although Dame Dorothy competed mostly as a sprinter, she won the 2014 Turnback the Alarm Stakes (G3) at 1 1/16 miles. Breeding Dame Dorothy to Curlin likely balances out any distance limitations.

Also, Spice Is Nice is only making her third career start, while Tonalist's Shape is already on her sixth start.

The rest of this field appears average at best. If Tonalist's Shape loses, the winner is probably Spice Is Nice at odds around 2-1 to 3-1.

With all the hype over Decorated Invader, it is logical to search elsewhere. One other option to consider is South Bend, who closed for third in the Palm Beach Stakes (G3) and Dania Beach Stakes with different styles.

In the Dania Beach, South Bend chased the pacesetter Get Smokin in second. Get Smokin kept South Bend at bay at the top of the stretch, but he began to tire late as Field Pass made his way between horses and South Bend kept grinding away in place.

Field Pass eventually mowed Get Smokin down, while South Bend moved forward late only to miss the runner-up spot by a neck to Get Smokin.

To his credit, South Bend still rallied strong on the outside and managed to pick up third, only 1 ½ lengths off the winner Vitalogy.

In order words, South Bend is versatile. Julien Leparoux only needs to take advantage of that and watch how the pace unfolds from Post 9.

Besides his versatility, he also faced good horses.

Get Smokin had previously finished second in the Kitten's Joy Stakes, while Field Pass went on to capture the Jeff Ruby Steaks (G3) at Turfway Park. Also, Vitalogy was second in the Bourbon Stakes (G3) at Keeneland last fall.

With Vitalogy and Decorated Invader taking money in this race, South Bend will go off as third choice or higher and probably not dip below 4-1. For a horse that is not far behind those two in quality, that is a good deal.

Expect a clear trip from the outside. If Leparoux reads the pace right and puts him in a good position, South Bend can post a mild upset.

According to TimeformUS' Pace Projector, the fractions are supposed to heat up with Rare Form and Bodexpress contesting the lead. Previously, the two speed horses locked heads in the Gulfstream Park Mile (G2) when Bodexpress folded all the way to last, 19 lengths behind the winner Mr Freeze.

In the Hal's Hope, most of the public searching for a closer will take Harvey Wallbanger on the rail off his smashing 5 ¼-length allowance optional claiming win. But if the pace collapses, Sir Anthony is in with a shot as well, especially at the nine-furlong distance.

Sir Anthony finished a non-threatening fifth in this race last year, but that effort came in a one-turn mile. One race prior, he beat Audible in the 1 1/16-mile Harlan's Holiday Stakes (G3) on this course, and one race after the Hal's Hope, he finished second in the 1 3/16-mile Skip Away Stakes.

Later in the year, Sir Anthony won the Cornhusker Classic (G3) and also finished a good third in the Lukas Classic (G3) at Churchill Downs.

Florent Geroux gives Sir Anthony his services this weekend, too, which is a great sign.

If the pace collapses, expect a good effort from Sir Anthony. Is his best effort good enough to win? That is a question mark, but he will offer value.

Last November, Seducer broke her maiden in excellent fashion at Aqueduct. She set the pace and never looked back, scoring by 3 ¼ lengths with a field-high 107 TimeformUS Speed Figure. The race came back strong, as the fourth-place Harvey's Lil Goil won the Busanda Stakes two starts later.

Note the pace figures in Seducer's win. She posted three straight 107s on the lead before slowing down slightly to a 107 in the fourth number.

Also remember that turf margins are compressed compared to dirt. A three-length win on the lawn is a dominating win, and she beat a good field, too.

According to Pace Projector, Seducer is supposed to receive pressure on the lead. But given how she impressive she looks, the pace may not matter.

Out of the five selections posted here, Seducer is the most likely winner.

Last month, Jackson performed well to win the World of Trouble Sprint Stakes at 13-1. From second, he chased the Jason Servis-trained Admiral Lynch and gradually wore him down.

In this spot, he gets the nod again for a few reasons.

For one, he owns successful experience at seven furlongs, as shown in his FTBOA Marion County Florida Sire Stakes victory at Tampa Bay Downs.

As a last point, the public is likely to support Vekoma based on familiarity on last year's Derby trail. But trainer George Weaver is poor off a 246 to 411-day layoff, losing with his last 11 starters.

Jackson could win this race at a value price again before getting over-bet next time.