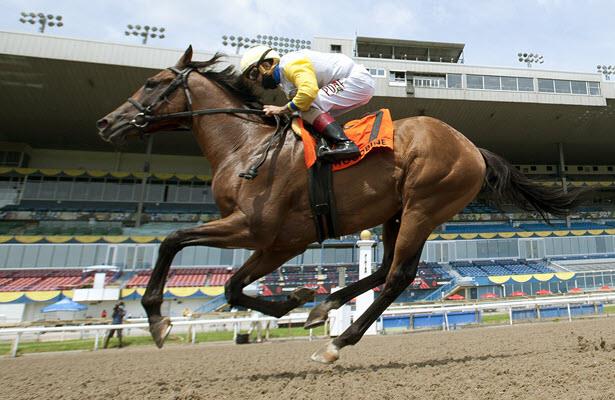 Even though Woodbine Racetrack offers 20-cent multi-race wagers, the minimum payoffs are sometimes more generous than bettors might think at first glance.

With that in mind, here is analysis of Woodbine's Saturday Pick 4 starting with the Singspiel Stakes (G3) on Saturday. The Woodbine Mile is included in the sequence.

Nakamura enters as the class of the field off his third-place finish in the Elkhorn Stakes (G3) two starts ago. He proceeded to run a mild third in a Saratoga optional claimer, but even that effort might win against these.

Jungle Fighter tried to mow down Uncle Bull in a local allowance race and settled for second. In retrospect, Uncle Bull had the benefit of a slow pace with early fractions of 24.68 and 48.18, allowing him to hold on late. If nothing else, Jungle Fighter gets credit for outkicking Armistice Day in the stretch, even if he could not catch the leader.

Skywire brings good form after a second in the Seagram Cup (G3) and a win in the Eclipse Stakes (G2), although both of those races came on synthetic.

Trading Bay just broke her maiden, but only a small step forward off that 87 TimeformUS Speed Figure is needed to win this race.

Takota faded to sixth in a local allowance optional claimer, losing by 14 ¾ lengths. The drop down to this starter allowance is supposed to help though. She owns useful tactical speed, which will allow her to adjust to the given pace.

Silver Dahlia closed well for third in a local turf starter allowance. She broke her maiden over the synthetic course last November. A fast pace will help her.

Let’s Have Fun only managed to close for seventh in the same starter allowance as Silver Dahila’s third-place finish. However, she only lost by 3 ½ lengths and might improve on the return to synthetic. Notice she broke her maiden on the synthetic course in June with a 91 on TimeformUS, and then ran second in a synthetic starter allowance with the same speed figure. The numbers went down once she ran on turf.

The cost-cutting leg is in the feature race.

Shirl’s Speight brings an abundance of talent to this race after impressive runs to break his maiden by eight lengths and win the Marine Stakes (G3) easily by over two lengths. The main concern is whether he needs more development before tackling older horses in his third career start. In his favor, this is not the strongest open Grade 1.

March to the Arch enjoys Woodbine with a 2 for 2 record on the turf course, and a 3 for 4 record at Woodbine overall counting his synthetic starts in 2018. He shows a big 127 TimeformUS Speed Figure for taking the local King Edward Stakes (G2). Is that number an outlier or the new norm? In 22 previous starts, his old high TimeformUS figure was a 123.

Illegal Smile figures to improve on the cut back to five furlongs after fading in her last two starts for trainer Wesley Ward. She did hold third in the 6 ½-furlong Catch a Glimpse Stakes, giving this filly some local turf stakes experience as a 2-year-old maiden.

Souper Munnings broke her maiden on synthetic with an 85 on TimeformUS, a competitive number relative to this field. Cutting back, she is likely to convert to a stalker role rather than setting the pace, which might help if the pace gets too fast.

Chatelet ran second after contesting the pace in a five-furlong turf maiden race at Colonial Downs. She might improve off her 85 TimeformUS figure too. The only problem is the projected fast pace.

Dirty Dangle broke her maiden by a head in a five-furlong synthetic race over Souper Munnings. TimeformUS only gave Dirty Dangle an 80 for the debut victory, but she could move forward in her second start.