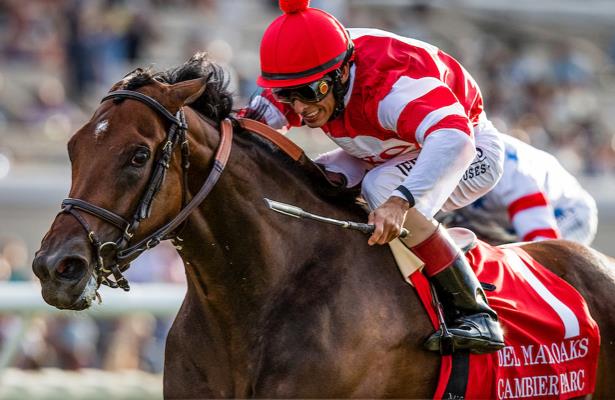 Time to offer some ideas for the $200,000 guaranteed Queen’s Plate late pick 5 at Woodbine Racetrack on Saturday. The sequence starts with the Bison City Stakes, followed by the Canadian Stakes (G2), Queen’s Plate and Ruling Angel Stakes to close. Those four stakes races surround a competitive turf sprint allowance in Race 11.

Remember that the minimum for Woodbine pick 5 wagers is 20 cents.

Here are the suggested picks below.

Afleet Katherine is the obvious class of the field after finishing second to Curlin’s Voyage in the Woodbine Oaks, while half a length in front of Merveilleux in third. Both Curlin’s Voyage and Merveilleux are viable contenders in the Queen’s Plate.

This filly also owns good tactical speed, which the Woodbine Oaks running line shows. She initially ran in fourth, only four lengths off the pacesetter Infinite Patience, before closing well in the stretch and holding of Merveilleux for second.

With those facts in mind, it is difficult to go against Afleet Katherine.

Cambier Parc is the class of the field after closing out 2019 with victories in the Del Mar Oaks (G1) and Queen Elizabeth II Challenge Cup (G1). She also won the Wonder Again Stakes (G3) and turned in a solid third in the Belmont Oaks Invitational (G1).

If Cambier Parc brings her best form to Woodbine this weekend, she wins. The 336-day layoff is one concern though, as horses typically peak in their second or third start back.

Also, TimeformUS shows trainer Chad Brown as winless at Woodbine in his past six starts over a year period. It only gives Brown an 81 rating at this track.

Just in case, also consider Theodora B. on the rail.

Last month, Theodora B. won the local Dance Smartly Stakes (G2) on the lead over three of the same opponents in this race. She does not necessarily need the lead either, as she took an optional claimer at Laurel Park with stalking tactics three starts ago. Throw out her disappointing efforts on synthetic, and she is a top contender.

As explained in an earlier post, Merveilleux ran a good closing third in the Woodbine Oaks after some minor traffic trouble on the far turn.

She closed strongly towards Curlin’s Voyage at the wire and also put in a nice gallop out afterwards.

Merveilleux is also working fast with a four-furlong bullet in 47 flat on Sept. 5 and a five-furlong work in 58 2/5 on Aug. 29, the second-fastest for the distance that morning.

With that said, Clayton figures to make it difficult on any other horse to win. He took the Plate Trial Stakes by half a length over Halo Again and Dotted Line. The only question for Clayton is why he did not fully put them away. Did the stretchout to nine furlongs dull his late punch?

If nine furlongs is stretching Clayton’s limits, then ten furlongs is not going to help. However, he remains an A contender.

Dotted Line is also interesting since he might improve with a stalking trip as opposed to setting the pace on the rail.

“Normal” races are always more difficult than stakes races because analyzing the class of these horses takes more time.

In any case, Jeanie B catches the eye at first glance. She ran a strong second to a loose leader after closing into a slow pace in a local Aug. 15 turf optional claimer.

Perfection Cat also shows a closing second in her most recent start in a local July 25 turf allowance. She lost to Afleet Katherine, the Bison City Stakes favorite and the main choice in the first leg of this sequence.

Raison d’Etre deserves a look as well after breaking her maiden at Ellis Park for trainer Mark Casse. The fourth and second horses in that race, Three Flamingos and Longpants Required, ran 1-2 next time in a Kentucky Downs maiden on Sept. 9.

In terms of TimeformUS Speed Figures, Boardroom, Artie’s Princess and Avie’s Samurai are the only three fillies with numbers of 100 or higher.

For mainly that reason, these are the three fillies to use in this synthetic sprint.