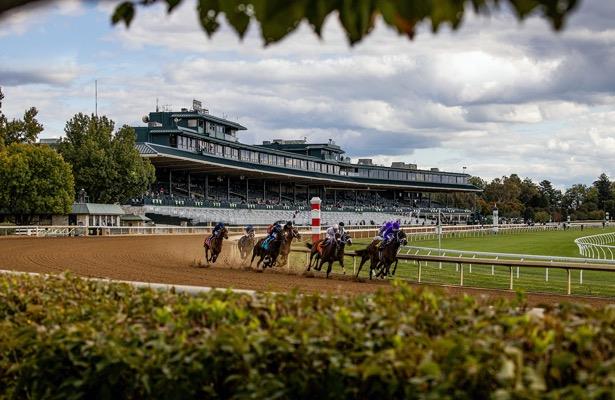 Two fast 3-year-old female sprinters in Venetian Harbor and Four Graces face off in the Grade 2, $200,000 Raven Run Stakes at Keeneland on Saturday. Both of them are talented fillies who deserve their roles as the first and second public choice. However, both own flashy speed and might end up creating a pace setup by default.

As usual, it is time to play against the favorites. An interesting alternative to those two fillies is Secret Keeper, who makes the fourth start of her career and seems likely to stalk them.

Secret Keeper put up a good effort to finish second in the one-mile Torrey Pines Stakes (G3) at Del Mar, losing by 1¼ lengths to Harvest Moon.

While Secret Keeper conceded the lead in the stretch run, she also contested fast fractions of 22.13 and 45.93 with Provocation before putting her away. Secret Keeper earned a 114 on TimeformUS, only one point less than Harvest Moon’s 115 for winning the race.

Harvest Moon is an exciting runner that is developing rapidly for a late-starting 3-year-old filly. After taking the Torrey Pines over Secret Keeper, she went on to defeat older fillies and mares in the Zenyatta Stakes (G2) and figures to go into the Breeders’ Cup Distaff as a legitimate contender.

Prior to losing to Harvest Moon, Secret Keeper broke her maiden at Santa Anita and took an optional claimer at Del Mar, both at sprint distances. Given her sire Into Mischief, it is possible she enjoys the cutback from one mile to seven furlongs in this spot.

TimeformUS Pace Projector puts Secret Keeper in second early, but that is debatable. In all likelihood, Four Graces goes to the front from Post 2, and Venetian Harbor either challenges from Post 5 or takes over the lead outright.

On the cutback to seven furlongs, Secret Keeper is probable to settle in third, the same position she came from in her Del Mar optional claiming win. From there, she needs to wait for Four Graces and Venetian Harbor to get tired and take advantage on the turn, if she is capable.

Yes, Secret Keeper does need to move forward, even if she receives the perfect trip described above. Four Graces owns two career-high 123 figures on TimeformUS, and Venetian Harbor shows a 122 on TimeformUS as her best figure, making Secret Keepers 114 a bit light.

But Secret Keeper is lightly raced with only four starts. No one knows the ceiling on this filly yet, as she could easily improve by eight or nine points.

I Hear You enters this race off a disappointing local eighth-place finish. But after getting squeezed in the stretch run, jockey Tyler Gaffalione did not persevere, making it unclear what position she was going to finish in with a clear trip.

Two starts ago, I Hear You ran a strong second in a Sept. 4 Churchill Downs allowance race. Closing from fourth, she only lost by ¾ of a length to Flabbergasted, who is a promising filly from the Mark Casse barn. I Hear You shows a 103 TimeformUS Speed Figure for the runner-up effort.

Three starts ago, I Hear You broke her maiden locally by 1½ lengths with a 102 on TimeformUS. She won at the same 1 1/16-mile distance as this race.

The 103 is eight points behind the favorite Great Island’s 111 for breaking her maiden at Churchill on Sept. 17. But Great Island did not defeat a great field. Notice how the five horses to return from that race failed to hit the board next time.

Great Island is also likely to become over bet because Chad Brown trains her too. She is capable of winning, but the risk in betting on her does not seem worth the reward.

I Hear You is one of only five fillies in the race to earn a 100 or higher on TimeformUS. She only needs to build off that runner-up finish Sept. 4.

The reasoning might seem light, but in turf races, sometimes all it takes is finding the horse with a troubled trip and proven good races prior to the troubled trip. I Hear You fits the category and offers the right price to win at 5-1 or higher.

This maiden race featuring 2-year-old fillies is too difficult to zero in on one horse, but here are a few key notes on three first-time starters.

Miss Dial cost a hefty $310,000 only five months ago at auction. When baby horses cost a lot at auction, it usually means the horse sports a great workout on site, looks excellent from a physical standpoint or comes from regal bloodlines, or a combination of all three factors results in a big six-digit price. A high price signals confidence in the horse.

Pedigree-wise, this is a full sister to the multiple stakes winner Chalon, who broke her maiden at first asking. That is a great sign for Miss Dial.

But Miss Dial might face stiff competition from her own stablemate in Wicked Bisou, who also makes her career debut and draws better in Post 10.

Wicked Bisou is a half-sister to the popular Midnight Bisou, who won $7.4 million in her career until a recent retirement. Midnight Bisou began her career by running second twice before breaking her maiden in the 2018 Santa Ynez Stakes (G2).

The public could over bet Wicked Bisou. But she deserves consideration regardless because of the win-early pedigree and strong connections.

The third one to consider is another first-timer starter in Willful Woman, who comes from the Steve Asmussen barn. She is a half-sister to Ever So Clever, who broke her maiden at first asking in July 2016 and took the 2017 Fantasy Stakes (G3) as her career highlight.

Asmussen wastes no time in starting this filly after eight workouts. She is probably ready to fire.