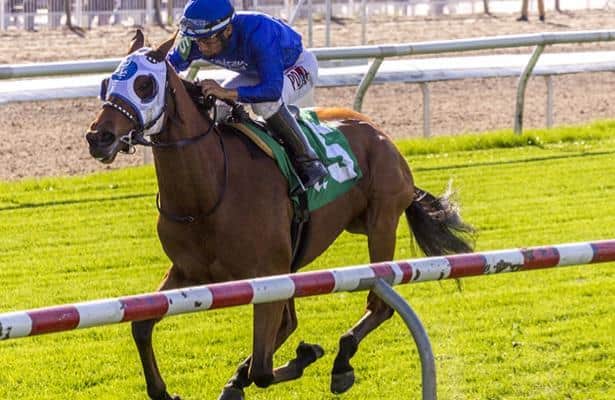 Churchill Downs is offering a $500,000 guaranteed all-stakes Pick 5 on Saturday, so this weekend's picks will all come from the high-profile sequence.

Do any singles exist? At first glance, no. If the first four stakes races do not eliminate tickets, the War Chant Stakes for 3-year-olds on turf will knock many people out to finish things out.

But bettors can save money in the first four legs before the wide-open finale using a few of these selections.

She’s a Julie failed in her last four 2019 starts before going on the shelf.

In the first three races of the ongoing losing streak, she faded to third in the Fleur de Lis Handicap (G2), Shuvee Stakes (G3) and Personal Ensign Stakes (G1). She then set an uncontested lead in the Spinster Stakes (G1) before fading to fourth.

But all four of those races came at nine furlongs. At 1 1/16 miles, She’s a Julie’s record is stronger, as evidenced by wins last year in the Bayakoa Stakes (G3) and La Troienne Stakes (G1). As a 3-year-old filly, she also won the 2018 Iowa Oaks (G3) and Remington Park Oaks (G3).

She’s a Julie owns the right early speed to stay within reach of Awe Emma early and get first strike on the turn. She can also lead.

Dunbar Road is a talented favorite who could make the start of the Pick 5 chalky. But She’s a Julie deserves a spot in tickets as well.

The most noticeable part of Alms’ past performances, besides the undefeated record, are the clear-cut winning margins of all four races.

In turf racing, a two- or three-length victory constitutes a dominating victory because of the nature of the surface.

Back in February, Alms won the Shantal Lanerie Memorial Overnight Stakes by a dominating 4 ¼ lengths at Fair Grounds. Prior to that, she won the Jimmy Durante Stakes (G3) at Del Mar by 2 ¾ lengths in November. Both of those races were run at one mile.

Alms also took the six-furlong Matron Stakes (G3) at Belmont by 1 ¼ lengths and broke her maiden by 3 ¾ lengths on the same course.

Not only does Alms win by sizable margins for turf racing, but she also takes her form to multiple racetracks.

In this spot, Sharing will attract a ton of money as the Breeders’ Cup Juvenile Fillies Turf champion. She could even take up the favorite role.

Considering Alms has dominated all her races, she is the choice, whether or not she dips slightly below her morning line of 3-1.

Global Campaign returned off the break in decent fashion, winning an allowance optional claimer at Gulfstream by a modest 1 ½ lengths.

Based on his prior form, the class is there to become a top older horse. Last year, Global Campaign won the Peter Pan Stakes (G3) over the eventual Belmont Stakes winner Sir Winston. He also ran third in the Jim Dandy Stakes (G2) to Tax and Tacitus, and fifth in the Fountain of Youth Stakes (G2) after chasing a supersonic pace set by Hidden Scroll.

Global Campaign is the type of runner destined for higher-level graded stakes races while most horses in this field will hang around the Grade 3 level for the rest of their careers.

With his talent and class in mind, Global Campaign gets the nod.

Pneumatic goes for his third win in three starts in his graded stakes debut. On paper, the jump in class is not a problem.

His two TimeformUS Speed Figures of 104 and 107 are competitive against this group. It is notable that the 107 earned in his optional claiming win was adjusted down from 110 because of the pace. He earned the 104 while making his career debut, which is fine.

It is reasonable to assume Pneumatic will move forward now with those initial starts under his belt.

With Maxfield likely to start as the favorite due to his Breeders’ Futurity (G1) win and name recognition, Pneumatic is a value here. He is the choice.

This is a competitive 14-horse turf race with one also-eligible waiting.

A longshot to consider including alongside some of the top choices is Street Ready, who comes off a win in an allowance optional claimer at Gulfstream. Street Ready won despite traveling six-wide on the first turn, making the one-length margin deceiving.

As for Street Ready’s seventh-place finish in the Cutler Bay Stakes, that is excusable. He moved too soon into a hot pace set by Inter Miami and Get Smokin. After the stalkers made their moves, they flattened out and two closers in Decorated Invader and South Bend took the 1-2 spots.

Back in February, Street Ready also finished eighth in the Palm Beach Stakes (G3). That effort is excusable as well because he steadied a few times in traffic.

Street Ready is likely to hold at 15-1 and could make the payoffs interesting.