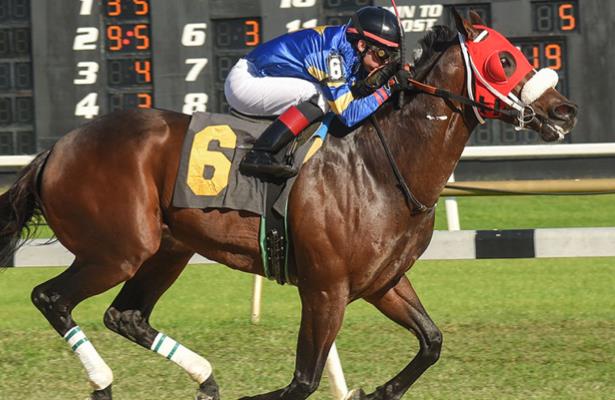 In an usually slow weekend on the national stakes schedule, there are no domestic Kentucky Derby or Oaks preps scheduled. But racing marches on with some playable races,  including the $100,000 World of Trouble Sprint Stakes at Gulfstream Park. The card also features several races for 3-year-olds, making it worthwhile to shift through.

Lasting Legacy is listed as the 7/5 morning line favorite in the World of Trouble. Because he received a perfect setup last time, he is a play-against now to lead off this rundown of five best bets for Saturday.

As explained often in this space, a "Z pattern" is when a horse drops back mid-race and comes on again in the stretch. Andy Beyer describes it in his book, Picking Winners, within the chapter, “Larceny and Betting Coups.”

Jackson shows the Z pattern in his Sunshine Millions Sprint effort. He started 5 ½ lengths off the lead before oddly dropping back as far as nine lengths behind when the leaders quickened on the turn. But in the stretch, Jackson woke up and closed sharply to third by 3 ¼ lengths.

This horse possesses speed, which makes the conservative tactics strange. Only two starts ago, Jackson pressed the pace in the FTBOA Marion County Florida Sire Stakes at Tampa Bay Downs on his way to winning by 3 ½ lengths. Five starts ago, he set a blazing pace in the local Carry Back Stakes.

Jackson can use some of his speed to sit a few lengths behind Epic Dreamer and Yorktown in the World of Trouble Sprint. If those two fade, then Jackson will get first jump.

Given his recent Z pattern showing and 10-1 odds, Jackson is worth a look.

There is social media hype over the Todd Pletcher first-time starter Liam's Point. For what it is worth, the un-raced colt worked on even terms with Spice is Nice on Feb. 15. Last month, $1 million filly Spice is Nice broke her maiden locally by an impressive 12 lengths, building some hype of her own.

Liam's Point's probable lack of value is tough to swallow, though. He might start at even money or less given the growing discussion over him.

A good alternative is Pletcher's other first-time starter, Ellis Island. This colt's dam line extends to the precocious Flanders, who won 4 of 5 starts including the 1994 Spinaway Stakes (G1), Frizette Stakes (G1) and Breeders' Cup Juvenile Fillies before retiring with an injury.

Precocious female runners often start a family line of such horses, even if they do not match the initial dam in talent.

Ellis Island is worth taking either against Liam's Point or alongside him.

Even though Cost Basis didn't break his maiden in a flashy manner when prevailing by ¾ of a length at Aqueduct, he defeated Kingmeister and Modernist.

Kingmeister went on to break his maiden at Gulfstream, while Modernist broke his maiden at Aqueduct and then won the second division of last Saturday's Risen Star Stakes (G2) at Fair Grounds. Neither Kingmeister nor Modernist earned big figures, but they flattered Cost Basis nonetheless.

Cost Basis does not face a strong field here. Second choice Violent City only earned a 86 TimeformUS Speed Figure in his career debut win, while third choice Silver Ratio earned an 87 in his successful career debut.

Cost Basis' last two figures were 100 and 98 -- meaning if Cost Basis can repeat his last race or even improve a bit, he will win.

Oaklawn Race 8: Allowance, 4-year-olds and up

Speaking of Z patterns, Tough Love shows two of them in his most-recent starts. Last time, he broke well and then fell five lengths off the leader before fighting back late to pick up third by 3 ½ lengths.

Tough Love only lost second place by ¾ of a length to Candy Cornell, which is notable because Candy Cornell is 4-1 in this field.

The Bob Baffert-trained favorite Morning Snow is 7/5 and coming off a 244-day layoff. According to TimeformUS, Baffert is surprisingly 0-for-5 over the past year at Oaklawn.

Tough Love is the right value at 9/2. The rail is not ideal, but if he could sit in the pocket and find an opening on the turn, he can win.

Out of the five selections listed in this post, Yeng Again offers the best chance to win. He might also offer value depending on how excited the public is about Exaulted, or if the two Baffert entries Fantastic Day and Mastering attract money.

Yeng Again finished second in his lone start to Silent Fury by half a length in a local Jan. 26 maiden race. He earned a 109 figure from TimeformUS.

Is the number legitimate? For a non-figure maker, it is important to see how other horses in the race fare in their next starts. In this case, Shooters Shoot finished fourth to Silent Fury, and he went on to finish second to the highly regarded Charlatan in his next start. As Charlatan posted a huge 122 on TimeformUS, Shooters Shoot earned a 113 for his runner-up effort.

In other words, Shooters Shoot went from a 98 in the Silent Fury race to a 113 when second to Charlatan.

Lane Way ran third in Nadal's maiden win, half a length behind Exaulted with a 105, but dropped to a 101 in the Charlatan race. Now, Exaulted is 2-1 off his runner-up finish to Nadal.

But Yeng Again is likely the better horse, making him a value at 5/2.