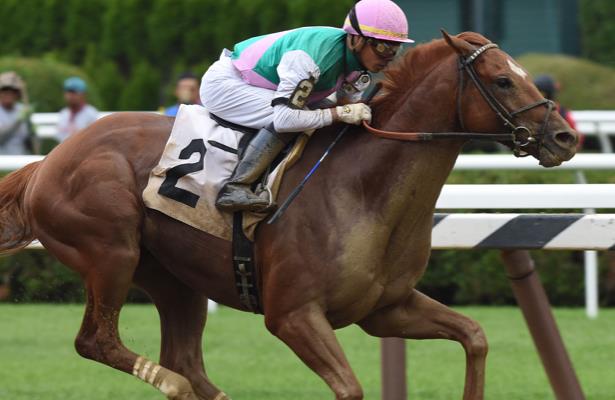 Considering his generous morning line, the first selection in this weekly look at five to bet on Saturday will focus on Hofburg, who returns in the Grade 3, $200,000 Mineshaft Stakes at Fair Grounds. Most racing fans know him from the 2018 Kentucky Derby trail. But the now 5-year-old horse has had trouble keeping a consistent schedule.

The morning lists Hofburg at 4-1, although he figures to go off shorter than that in his first race since last summer. Regardless, there is more than reason to choose Hofburg, including a projected fast pace and class.

Considering the presence of speed types such as Pirate's Punch and Winning Number, the pace is likely to become heated. Even Sleepy Eyes Todd, Silver Dust or Cutting Humor could get involved, setting the race up for a mid-pack type or closer.

By now, most everyone knows how Hofburg runs. He prefers to close from mid-pack or farther, but if the pace is slow enough he could possibly stalk. Last summer, Hofburg won a Saratoga allowance optional claimer after sitting only three lengths off the pace through a slow pace.

Hofburg also owns the high late pace rating at 120. The only other two horses with 100-plus TimeformUS late pace ratings are Blended Citizen and Captivating Moon. Certainly, Hofburg outranks those two names in class.

It wasn't too long ago that Hofburg finished runner-up in the 2018 Florida Derby (G1) and third in the 2018 Belmont Stakes to Justify.

If Hofburg is truly 4-1, then it is time to unload on this classy horse. Hofburg might fall down to something more like 8/5, but he is still acceptable at that price.

The 3-year-old Tapit half-brother to Rachel Alexandra, Airstreem, is entered in this race, and he's seeming to get little press. With the lack of media attention, perhaps he will stay 5/2?

Airstreem gets the nod because he shows the “Z pattern” in his Dec. 28 debut when sprinting six furlongs locally. The pattern occurs when a horse loses ground mid-race and makes part of it back in the stretch. Visually, it may look like the horse is only warming up for the next go.

Airstreem initially ran 7 ¾ lengths off the pace before falling 8 ½ lengths behind. He gained half of it back late, closing for fourth by 4 ¼ lengths.

Airstreem's pedigree is obviously loaded with routers. Rachel Alexandra won the 2009 Woodward Stakes (G1) against males as her career highlight, while her siblings Samantha Nicole and Wooderson both broke their maidens at nine furlongs. This race is right up Airstreem's alley at nine furlongs.

As long as his odds do not fall lower than 8/5, he is the choice.

Admittedly, the morning line favorite Chestertown ran well when third to Blackberry Wine on Jan. 18. He made a mild move toward the end.

But there are other options in this race higher than 6/5. For instance, Shake Some Action makes his second dirt start after breaking his maiden locally in a Jan. 18 turf race. From mid-pack he won by 1 ½ lengths.

The nine-furlong turf win gave Shake Some Action the right experience in terms of distance, as this race measures nine furlongs as well.

Bettors still need to forgive his career debut on dirt, when he finished fifth by 15 ¾ lengths. Because it was a six-furlong sprint on slop, cross the race out. Many horses user their career debuts as a learning experience.

If Shake Some Action can transfer his turf routing form to dirt, he can win.

Rag Tag makes his return after 303 days. He was last back in April finishing second in his career debut at Keeneland in a 4 ½-furlong sprint.

In his return race, trainer Todd Pletcher elects to start Rag Tag in a one-turn mile. From a pedigree standpoint, there is no reason he cannot handle the stretch out. His sire, Union Rags, is a known route influence who won the 2012 Belmont Stakes, while the dam Endless Sea produced Silver Ocean, a six-figure earner who competed internationally in routes races.

The field Rag Tag faces here is not difficult. Consider that the 9/5 morning line favorite Mr. Philly Dilly a two-time loser who began his career finishing second in a Laurel Park maiden claimer.

Attachment Rate at 5/2 is more promising in the long run as the runner-up to the highly-touted Market Analysis on Jan. 25. But he is disadvantaged as a late closer on dirt. According to TimeformUS, he also had a hot pace to run into in that maiden race, which means Market Analysis was better than it looked.

Rag Tag is the choice to fire off the layoff.

With Restless Rider carrying some hype off a long layoff, this is a nice race to pick an alternative.

Coach Rocks is an interesting price at 9/2, especially since she owns two wins in two starts at the 1 1/16-mile configuration at Gulfstream. She broke her maiden locally in 2018 at this distance and also captured the Gulfstream Oaks (G2) one month later.

As for Coach Rocks' 2019 campaign, she ran some decent races against tough company. After setting the pace in the Molly Pitcher Stakes (G2) at Monmouth, she gave in to Midnight Bisou. One month later, she also set the pace in the Personal Ensign Stakes (G1) at Saratoga before fading in the stretch to fifth. Midnight Bisou won again, with Elate in second.

Coach Rocks, who has moved from Dale Romans to Pletcher, can sit behind the pacesetter Cookie Dough in this spot and strike on the turn. If she gets the jump on Restless Rider, she can win for her new barn.