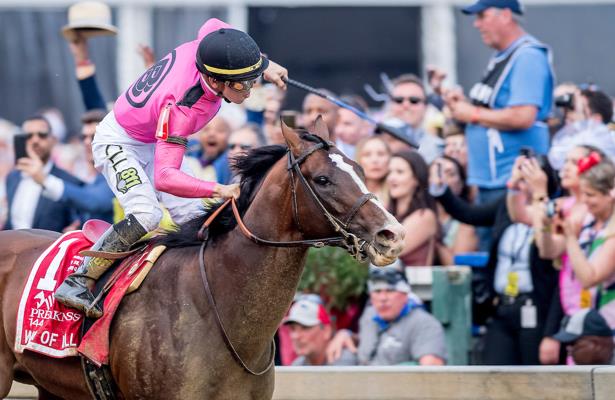 Exiting the Kentucky Derby, most Maximum Security defenders ignored the idea that War of Will would have earned a higher placing, or even won, had Maximum Security had not fouled him and a few others.

Well, War of Will then went and took Saturday's Preakness Stakes at Pimlico race Course, further igniting that debate. The War Front colt trained by Mark Casse also succeeded thanks to two key changes from his Derby tactics.

War of Will relaxed better on the rail, and jockey Tyler Gaffalione decided not to risk tipping out.

Back in the Derby, War of Will had almost the same inside spot, but he appeared slightly rank and wanted to go. Gaffalione had to tug on him.

This time, War of Will let the pacesetters go in a smoother fashion, as he initially fell about four or five lengths off them going into the first turn.

Warrior’s Charge, along with Market King and Anothertwistafate, burned through opening fractions of 22.50 and 46.16 for a 1 3/16-mile race. My top choice, Alwaysmining, settled wide and not far behind them.

War of Will inched up closer on the backside and stayed relatively close to the lightning pace while chasing in the pocket position. He did not seem to fight Gaffalione.

Warrior’s Charge blazed in 1:10.56 at the six-furlong point, and they went so fast that Market King began to completely back out of the race. Anothertwistafate kept fighting on the outside, and Warrior’s Charge continued to lead them, but the pace clearly took its toll by the far turn.

Now, Gaffalione needed to decide whether to tip out once again or stay inside.

Shifting into the clear after saving ground is a common and effective maneuver. Many horses get tipped out in the stretch run for the sole purpose of running in the clear, as it allows more freedom.

But after what happened in the Derby, it is understandable Gaffalione did not want to attempt the same move. He decided to stay patient and wait for an opening inside, and the decision worked out in the end.

Once War of Will passed Warrior’s Charge, the race was over. Anothertwistafate backed out of the mix, as did Alwaysmining, who made a brief threatening rally on the outside before folding up in the stretch.

Warrior’s Charge remained in the picture until the end, but he was tired. The longshot Everfast and Owendale managed to pass him for second and third.

Improbable repeated his Kentucky Derby run by running with the front pack without doing anything noteworthy. This is one of the biggest money burners in racing right now as he continues to lose at short odds. The Justify-like blaze on his head and the same connections as the Triple Crown winner tricked many into backing this colt.

Laughing Fox managed to arrive late in the stretch for fifth, and he ran decently given his 21-1 odds. He had too much left to do from behind.

Win Win Win looked like a threat outside of Improbable for a short period too but then hung badly. This colt is begging for a cutback to one turn.

Despite slipping through the rail, War of Will was not handed the race. He chased a fast pace and still had enough in reserve to hold off the closers.

Maximum Security might lead the division, but War of Will is right up there in the discussion as he already picked up multiple graded stakes wins in the spring at Fair Grounds and made a bold move in the Kentucky Derby.

Regardless of what happened two weeks ago, today War of Will proved that he can win a Triple Crown series race given a clear path, and given his past resume, it is hard not to think he might become the top 3-year-old.

To offer some thoughts on the 1-2 Lexington Stakes (G3) runners Owendale and Anothertwistafate, the former performed well and backed up the Lexington win with a solid third-place finish in the Preakness. He received a pace setup but proved the speed figures Beyer, TimeformUS and Brisnet gave him at Keeneland were not flukes. How did he improve so much in his last two races?

As for Anothertwistafate, he needs synthetic. On dirt surfaces, this colt cannot secure the lead and ends up getting outkicked in the lane or burned by pace. On Golden Gate’s synthetic, it was always easier for him to lead.

It may be hard to see his slight regression on dirt because he did finish second in the Sunland Derby (G3) after chasing wide and also ran second in the Lexington to Owendale, who ran well in the Preakness, but the losses are piling up after three large-margin synthetic wins.

With the main synthetic era over, finding suitable races for him other than at Golden Gate might prove difficult. If nothing else, he could always try turf.