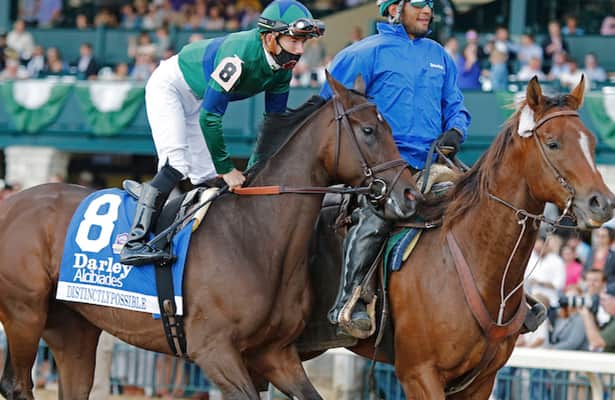 Only one filly stands out on speed figures in the Grade 2, $250,000 Black-Eyed Susan Stakes at Pimlico on Friday, and her name is Adare Manor. She has been bouncing around barns and makes her first start for trainer Sean McCarthy after being transferred from Bob Baffert to Tim Yakteen.

For handicappers who wish to look elsewhere for better value or do not trust Adare Manor for any reason, the race becomes more attractive. After considering the pace scenario, there is a chance she could lose.

Adare Manor wants to set or contest the pace. In January, she set the pace in a Santa Anita maiden race before drawing clear to win by an impressive 12 lengths. One month later in the Las Virgenes Stakes (G3), Adare Manor set the pace before opening up again to win by 13 lengths.

Instead of setting the pace in the Santa Anita Oaks (G2), Adare Manor found herself pressing Ain’t Easy through fractions of 23.05, 46.46 and 1:10.56. TimeformUS does not mark these fractions as fast, but at one point 4 1/2 lengths came between Adare Manor and Desert Dawn in third. When two speed horses open up together early, the pace is usually fast.

Adare Manor put away her pace opponent Ain’t Easy, but she still lost to Desert Dawn by a neck. The next starts of Desert Dawn and Ain’t Easy present a conflicting picture, as Desert Dawn ran third in the Kentucky Oaks while Ain’t Easy folded to last in the Eight Belles Stakes (G2).

More than one filly could become a win threat if Adare Manor is weakened early. To back up the fast pace concerns for Adare Manor, TimeformUS Pace Projector labels the expected pace in red.

The best alternative in this race is Distinctlypossible.

Distinctlypossible showed promise last year with a runner-up finish in the Alcibiades Stakes (G1) as a maiden starting for the second time.

After taking time off, Distinctlypossible came back in April at Keeneland and broke her maiden by 1 1/4 lengths over a closing Miss Yearwood with a solid 107 TimeformUS Speed Figure and a 95 Brisnet Speed Rating. Both numbers put Distinctlypossible in the top 3 mix of fastest fillies in the race.

On the negative side, Distinctlypossible shows only a 78 Beyer Speed Figure for the Keeneland win, which makes her appear significantly slower on that brand. Handicappers need to decide which brand's speed figures they trust more or ignore them altogether.

Given the normal growth and maturation process, it is more likely that Distinctlypossible returned as a faster filly rather than as the same exact runner from last fall. Note the runner-up in Distinctlypossible’s Keeneland win, Miss Yearwood, who is also in this race. She broke her maiden in her next start by 7 1/4 lengths at Churchill Downs on April 30.

In the Black-Eyed Susan, Distinctlypossible figures to sit in the same close-range stalking position as in her last start. In that race, she was in fourth before taking over on the far turn and holding off Miss Yearwood.

If Adare Manor is affected even slightly by pressure from Missy Greer or Beguine, Distinctlypossible can attack first as a stalker and take control.

For those who believe the higher TimeformUS or BRIS figures, 6-1 on the morning line is value on Distinctlypossible, especially with trainer Chad Brown and Irad Ortiz Jr. working together. She is still a fair win bet if she drops to 4-1 at lowest.

Even though Epicenter ran second in the Kentucky Derby after the 80-1 long shot Rich Strike upset the field, he gave a great effort after settling relatively close to the suicidal pace and leading the field at the top of the stretch. He held off Zandon in the stretch and lost by only 3/4 of a length to Rich Strike.

Speed horses who perform well in a Kentucky Derby with a suicidal pace usually run well in the Preakness Stakes. Think about Oxbow’s pacesetting Preakness victory in 2013 after the suicidal Kentucky Derby pace led by Palace Malice resulted in a sixth-place finish two weeks earlier.

With Secret Oath’s presence in the Preakness, the odds on Epicenter might end up better than expected. Getting even money on this colt is fair, while 8-5 or higher would arguably represent value odds.

Epicenter is the single in all wagers.

Distinctlypossible to win at 4-1 or higher.