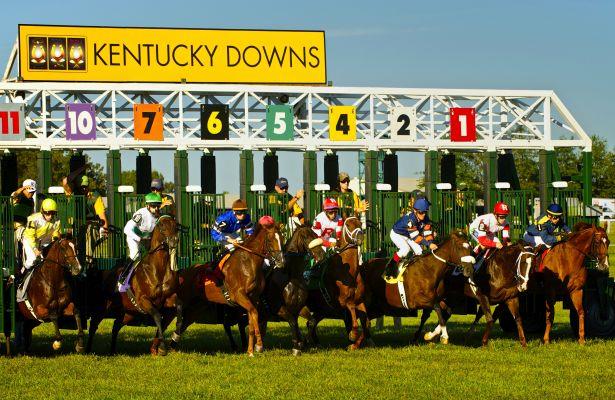 For both horsemen and bettors, Kentucky Downs is a unique experience. According to the track’s website, “Unlike other racetracks, which are typically oval, the course at Kentucky Downs is kidney-shaped, featuring undulation and a unique right-hand bend.” This is a European-style turf course, right on the southern border of Kentucky.

Most handicappers consider Kentucky Downs a speed-friendly course. Why? Perhaps the elevation changes and longer grass take some of the starch out of closers. For horses used to a simple oval with well-manicured turf, the changes are significant.

However, the first day of the meet did not follow this theory. Not a single pacesetter won, while stalkers, midpack-types and other closers all found success.

Here is a rundown of the Sept. 7 races, and what to conclude.

Mr Matuschek took control with an uncontested lead early, holding a two-length margin for at least half the race. He became tired late.

Mud Pie made his move from fourth and put Mr Matuschek away with authority in the stretch run, romping by an impressive 6 1/2 lengths. Mr Matuschek did manage to hold second.

High Crime and Corruze put up an old-fashioned speed duel, with four lengths between those two horses and the third-place Power End. Corruze gave up the fight first and folded to seventh in an eight-horse field. High Crime fought longer into the stretch, but he faded to fifth in a deceptively good effort.

Holiday Stone took advantage of the speed duel to rally and win by 4 3/4 lengths from midpack, with Power End in second and Homebred finishing third. The top three finishers began the race fifth, third and sixth in another win for stalkers and closers.

Surrealist gave a good effort by contesting the pace with La Bella Rosa and getting the best of her in the stretch. She only gave up the lead to the stalker Fluffy Socks, who began the race in fourth and gradually went past Surrealist while three wide in the stretch run.

Do With Pride ran on an uncontested lead by the first quarter. With Discovered chasing him to no avail, Do With Pride briefly held a two-length lead at one point.

Unfortunately, Strut the Ring winded up his run on the outside and made an exciting move to mow the entire field down. He won by a length over Do With Pride in second, with the midpack-runner High Noon Rider moving up two spots to third.

Because of a bizarre gate malfunction leaving some horses behind before the starters even loaded them, this race was declared a no contest after its completion.

For what it is worth, though, three stalkers in Royal Prince, Makai and Shaldag ran 1-2-3 after starting the race 4-3-5. The initial pacesetter Bourre’ Trick and presser Hoistthemainsail could not keep up the pace and faded to ninth and seventh late.

From Post 10, Secure Connection opted to lag in 11th early before making a wide and steady move from 11th to mow the leaders down. He won by 3/4 lengths.

Amanite came from close range in fourth to pick up second by a head over Lea’s Princess, who had contested the pacesetter and briefly took control of the lead before fading slightly to third.

After watching the earlier 6 1/2-furlong races, it is clear that it takes some effort to show speed from the inside because the configuration initially leads to a slight right-hand turn. It is similar to the old downhill turf configuration at Santa Anita, as the horses break and turn right.

From Post 3, Flatoya found herself on an uncontested lead. But she had nothing left in the stretch as her closest pursuer, M Is for Magic, took control briefly. Shortly afterwards, Too Sexy gave M Is for Magic a challenge on the outside.

More Than Unusual, another stalker, found a way to tip out and mow them all down for the win. She began the race in fourth, while Too Sexy ran in fifth early on.

From sixth, Plum Ali made a wide stretch bid to win by 2 3/4 lengths. Flown came from seventh to pick up second by a neck over the deep closer Oliviaofthedesert.

An early speed horse finally took the top spot in the One Dreamer Stakes.

Dalika gave a hard press to the pacesetter Harmless throughout the race, never leaving her alone until Harmless called it a day in midstretch. From there, Dalika held off two midpack closers in Madita and Our Bay B Ruth in a gutsy victory.

Perhaps Dalika turned in an exceptional performance to press hard and win. Outliers exist in almost any handicapping pattern.

In the stretch run, Barrister Tom found room on the inside and made his way to the lead, holding off fellow stalker Pivotal Mission, who took the outside route instead and ran second.

Indy Tourist made his rally from seventh to pick up third, resulting in another trifecta shutout for the initial speed horses.

Flavius chose to lag in seventh early. But he winded up his run while wide in the stretch run and took control for a  3/4-length win in the Tourist Mile Stakes.

Speed horses were at a disadvantage on the first day, although perhaps one or two of those results came as a result of an early speed duel.

But looking at the results, it is hard to deny the advantage of making a wide late move, whether from a stalking position, midpack or farther back. In a reverse from previous years’ trends, horses with late speed won almost all the races.

The question is whether the pattern holds in the remaining days of this short meet, which is scheduled to run five more days, on Sept. 9, 10, 12, 13 and 16.

It does not hurt to at least upgrade closers and give them stronger consideration.

Also, in 6 1/2-furlong races it seems like the outside post positions get a closer angle into the initial right-hand turn. Keep that in mind as well.