That figures: Maximum Security ran his usual race in defeat 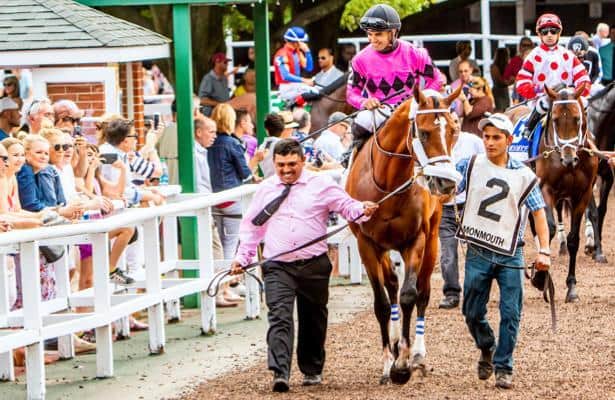 While Maximum Security picked up the second loss of his career Sunday in the Pegasus Stakes at Monmouth Park, thought it marked the first time he had been beaten to the wire. An upset defeat to King for a Day prompted some head scratching, as the disqualified Derby winner was away at 1-20 in an ungraded stakes.

When it comes to betting, this horse carries the aura of a horse who won the Derby despite the DQ. It came as a disappointment to see him lose to a horse that didn't appear in the Triple Crown series, with King for a Day entering off a minor stakes victory on the Preakness Stakes undercard.

But in this weekly look at speed figures, it's worth noting Maximum Security earned roughly the same numberss as he did in the Kentucky Derby and Florida Derby (G1). In other words, there is little reason to believe this colt regressed. Rather, the better explanation is that Maximum Security lost to a talented horse.

Maximum Security received a 119 from TimeformUS for the Pegasus, that after earning a 120 in the Kentucky Derby and 116 in the Florida Derby, a race in which he dominated on the front end and won outright.

As for Beyer Speed Figures, Maximum Security registered a 100 in the Pegasus following 101s in the Kentucky and Florida derbies.

There is roughly a 20-point scale difference between TimeformUS and Beyer Figures. Given those numbers, both teams agree on his figures.

There's another checkpoint that makes it safe to assume Maximum Security ran a fast race in defeat: the field spread out toward the end of the race, signaling the top two were moving well, and others simply couldn't keep pace.

The Pegasus' official chart shows wide margins past first and second, as 5 3/4 lengths separated Maximum Security and the third-place Direct Order, 6 lengths came between Direct Order and Last Judgement in fourth, and then another 6 12 lengths to Identifier in fifth. It was nine lengths back to Caladan in last.


King for a Day and Maximum Security completely thinned out the field. If all six horses had hit the wire close together as a group, it would indicate a slow race, or that Maximum Security had regressed.

But indicated by the spread finish, King for a Day stepped up to fulfill the potential he showed as a 2-year-old colt.

King for a Day also earned a 113 TimeformUS Speed Figure back then, which is a solid number for a juvenile in October. Even though he regressed to a 108 when fourth in the Kentucky Jockey Club (G2) one start later, he still looked good from a pace standpoint.

TimeformUS coded the first three Kentucky Jockey Club fractions in red, and King for a Day moved early into the teeth of the hot pace. At the top of the stretch, he led.

He finished fourth, but for a horse making his third career start, he finished well to only lose by two lengths. Using pace analysis, he arguably ran best. Rick Sacco, racing manager for owner Red Oak Stables, also said King for a Day exited the race with issues necessitating a layoff.

King for a Day did not appear again until the May 18 Sir Barton to win easily. But he also earned a career-best 118 on TimeformUS.  Tone Broke, the runner-up, is not a bad horse, either.

The Sir Barton speed figure King for a Day earned was only two points worse than Maximum Security’s Derby figure, putting them on the same level, at least in terms of TimeformUS numbers.

Then, King for a Day entered the Pegasus Stakes.

Maximum Security went to the lead after a slight stumble at the start, while King for a Day broke well and pressed him.

For the Pegasus win, King for a Day earned a 120 TimeformUS Speed Figure, which is a natural progression from the 118 in the Sir Barton. It was not a huge step up, as he already moved significantly forward.

But again, horses who cross the wire first in the Derby tend to hold a mystique that demands they must go undefeated in future races. That is why it came as a huge surprise to most people that Maximum Security lost.

I often debate the validity of speed figures, but in this case, TimeformUS gave away that King for a Day possessed the right ability to spring an upset, as did his healthy 2-year-old form.

Give King for a Day some credit, as he could emerge as one of the best horses in this division. He owns the right talent and tactical speed.

Maximum Security, meanwhile, loses nothing in defeat in my opinion. He was consistent on Sunday and remains one of the best 3-year-old males. With sophomore dirt routers, the best speed figures top out around 120 on TimeformUS and 100 on Beyer.

As is the theme in this division, both horses give racing fans something to look forward to later this summer, perhaps in a Haskell Invitational (G1) rematch on July 20.