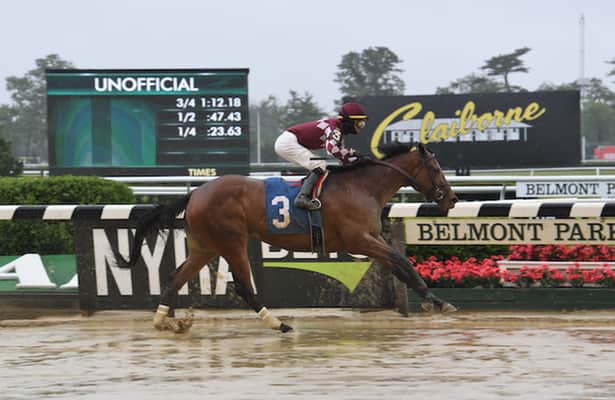 On Sunday, Remington Park takes the night stage with the featured Grade 3, $400,000 Oklahoma Derby and the $200,000 Remington Oaks (G3) on the undercard. Both races offer opportunities for bettors to find value selections.

For bettors who love a fast pace scenario, one looks to be brewing on the Oaks side, while the projected Derby pace appears moderate. Yet both races appear open from a betting standpoint.

Here are thoughts on each race.

The right closing-style filly to choose looks like Amendment Nineteen, who made the switch to trainer Brad Cox and receives the services of Joel Rosario for the first time.

In Amendment Nineteen’s last start on July 24, she finished second in a seven-furlong allowance race at Saratoga while losing to Caramel Swirl by three lengths. Although Caramel Swirl then ran a well-beaten fourth in the Charles Town Oaks (G3), she deserves a pass for that effort because of the bullring configuration.

The stretchout to 1 1/16 miles is likely not a problem as Amendment Nineteen broke her maiden in a one-mile maiden race. Amendment Nineteen’s dam side might appear sprint-oriented, but on the top half, Constitution is a fine route sire.

Amendment Nineteen is the choice. Expect a mid-pack or farther closing position.

For multi-race wagers, also throw in the favorite Pauline’s Pearl and Lovely Ride.

Pauline’s Pearl is not a super filly by any means, but this stalker did win the Fantasy Stakes (G3) and also broke her maiden at the same distance as this race.

Lovely Ride won by setting the pace in the Cathryn Sophia Stakes at Parx Racing. However, she did settle into a tracking position before taking control of an optional claiming race at Churchill Downs on May 14 and drawing clear by 6 1/2 lengths late. Perhaps this one can settle.

This race does not contain any true pacesetters who absolutely need the lead. But tactical speed horses such as Flash of Mischief, Team Merchants and Mr. Wireless might keep the pace honest.

Bettors likely will want to spread, as there is not one horse who captures the eye.

With that said, Super Stock is a solid choice based on his 2-for-2 record at nine furlongs, which includes wins in the Arkansas Derby (G1) in April on the Kentucky Derby trail and the recent Ellis Park Derby. He won the latter race by a clear 3 3/4 lengths and the former by 2 1/2 lengths.

Super Stock is not a fast or exciting horse, but he seems to like the distance and figures to save important ground on the rail. Not every horse likes eating dirt, but that is the cost of saving ground. Note that in the Arkansas Derby, Super Stock won after running inside and behind the leaders throughout the far side.

While Super Stock is the narrow top choice, Team Merchants deserves another chance too. His overall potential and distance preference is still unclear after five starts.

Team Merchants faded to fifth after making a menacing and wide move in the one-mile Shared Belief Stakes at Del Mar. Considering Medina Spirit and Rock Your World ran 1-2 in the race, he gets a pass for losing to former Grade 1 winners.

If Team Merchants fades again, then maybe he needs to sprint. For now, he gets the benefit of the doubt while running against softer horses.

Mr. Wireless and Flash of Mischief are other win contenders.

Mr. Wireless displays an ultra-consistent record with four wins and one second in six starts. His lone off-the-board finish came in his career debut at six furlongs. In his two most recent two starts, he won the Indiana Derby (G3) by 3 3/4 lengths and the West Virginia Derby (G3) by 1 1/4 lengths. The latter win came at nine furlongs.

Flash of Mischief won the St. Louis Derby by one length in his most recent start. Three starts ago, he also ran second by 4 1/2 lengths in the Iowa Derby. Even the distant fourth in the Amsterdam Stakes (G2) at Saratoga against Jackie’s Warrior is not terrible.

From a pedigree standpoint, Flash of Mischief is supposed to handle nine furlongs as a half-brother to the allowance-level router Royal Mesa.

Flash of Mischief is not the top preference, but he can win.