Weekend Plays: Who can beat Mandaloun in the Pegasus? 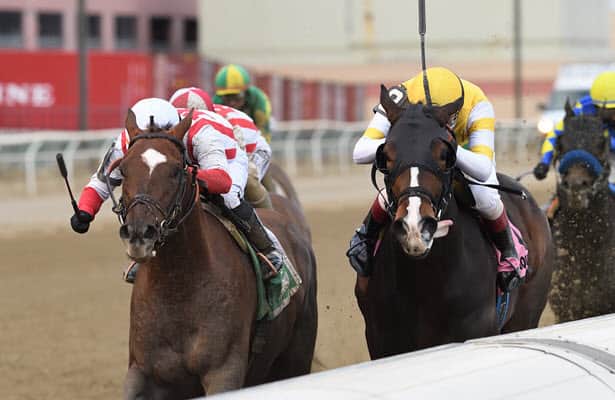 Today’s post will cover Sunday races for once and offer one selection for the $150,000 Pegasus Stakes at Monmouth and a seven-furlong optional claiming race for 3-year-olds at Churchill Downs. This is a tough weekend to think of good ideas for races to bet on.

In the former race, the big name is Mandaloun, who was second in the Kentucky Derby last month at Churchill Downs. He might become the official winner at some point depending on the legal battles involving Medina Spirit’s connections and KHRC, but the result is not final yet.

Here are the two picks for June 13 at Monmouth and Churchill Downs.

Without a doubt, Mandaloun is the most accomplished horse.

However, Weyburn owns a fair shot at upsetting the favorite. This is a nicely-bred son of Pioneerof the Nile out of Sunday Affair. Sunday Affair’s dam Million Gift is a half-sister to the $1.3 million earner Sky Beauty, who won several Grade 1 races.

Weyburn turned in a promising 2021 debut in the Gotham Stakes (G3). First, he pressed the pace set by the Bob Baffert-trained Freedom Fighter and then battled Crowded Trade to his outside in the stretch run before prevailing in the end.

Although Weyburn only finished first by a nose over Crowded Trade, both horses beat a nice runner in Highly Motivated back in third. For their efforts, Weyburn and Crowded Trade both earned a 113 on TimeformUS. Back in March, a 113 was a respectable TimeformUS figure to receive relative to his peers in this crop, and it still fits in here.

Weyburn did not perform as well in the Wood Memorial Stakes (G2) at nine furlongs. After pressing the pace set by the longshot Market Maven, Weyburn had nothing left to fend off horses in the stretch and let Dynamic One, Crowded Trade and the super longshot Bourbonic pass him. Still, Weyburn only lost by three lengths in his nine-furlong debut.

Weyburn made his first start at nine furlongs in the Wood Memorial after a one-mile race, and sometimes young horses need more time to work their way up the distance ladder rather than tackling it head on. As a developing 3-year-old, Weyburn can rebound off the fourth in the Wood Memorial.

At 4-1 or higher, Weyburn is a fair win bet. Watch Mandaloun’s odds. If Mandaloun dips down into the 3-5 range, then taking a shot on Weyburn makes sense.

If there is bridgejumping action on Mandaloun (generally it happens when a single horse shows six figures in the show pool), Weyburn is a possible show play as well.

Angkor returns off a layoff for low-profile trainer Philip Bauer, but he deserves a look here in this large field of 3-year-olds running seven furlongs.

Back on Nov. 1, Angkor broke his maiden right off the bat in a local six-furlong sprint with a four-length win and 102 TimeformUS Speed Figure. For a 2-year-old making his career debut in early November, that is a respectable speed figure.

In his next start, Angkor tried a local Nov. 22 allowance race over a two-turn route for the first time and went to battle with Starrininmydreams down to the wire. Starrininmydreams eventually won by a nose, but Angkor lost nothing in defeat.

To start off the season, Angkor ran in an optional claiming race at Fair Grounds on Jan. 16, and he did not fire while finishing sixth by 12 ¼ lengths. Considering the 148-day layoff afterwards, perhaps something physically went wrong in that race.

Now, Angkor is back facing a suspect optional claiming field. He also gets Lasix for the first time and seems likely to build on his maiden win if he enters the race healthy. His consistent worktab with regular intervals since May 8 hints that he is ready to fire.

Expect Angkor to use his tactical speed to get into a close stalking position and fire his best on the turn.

At his morning line odds of 12-1 or higher, Angor offers value in terms of a win and place bet.