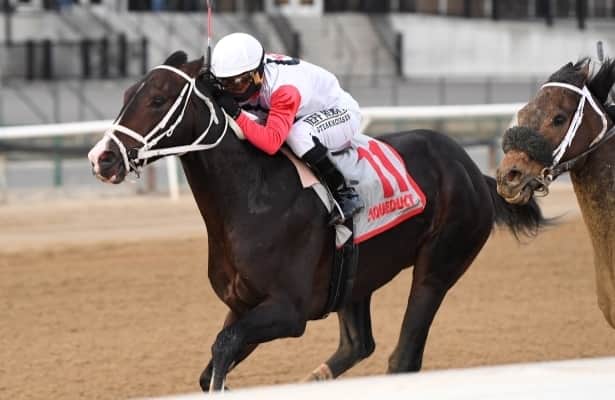 For those searching for a mild longshot in the optional claiming feature at Belmont on Sunday, Lobsta might offer bettors a run for their money. Since returning in December, this 4-year-old colt has turned into a faster colt compared to his earlier form one year ago. There are a couple of reasons to choose him.

Lobsta possesses the right kind of speed that could allow him to either lead the field, settle into a pressing position or stalk the pace. If the fractions heat up, he could even settle a few lengths off the pacesetter.

According to TimeformUS Pace Projector, Mr Phil is supposed to lead this field, with Cost Basis second and Lobsta right next to them in third. Behind them on the graphic is Whistling Birds, Fortin Hill and Hidden Scroll. The Pace Projector labels the expected pace scenario in red for fast, but it is not clear if the pace will actually heat up to that point.

Cost Basis is not a crazy speed type. He has run as either a presser or stalker in all 13 of his races. In addition, trainer Chad Brown takes off the blinkers, and the removal of blinkers usually results in more relaxation and less early speed if the horse responds. He is not likely to gun for the lead.

Whistling Birds might attempt to flash some speed from the rail. This is a versatile 6-year-old gelding though who can also either set the pace, press or stalk. In his most recent start Whistling Birds won the Caixa Eletronica Stakes, a starter stakes at Aqueduct. Overall though, his pace figures are not blazing fast.

Hidden Scroll looks more natural setting the pace in routes. In his last two dirt sprint attempts, he ran as a closer in a six-furlong allowance race at Oaklawn and the seven-furlong Commonwealth Stakes (G3) at Keeneland.

Fortin Hill is a confirmed stalker and not likely to go for the lead or press. He is a consistent runner with only one off-the-board finish in a graded stakes race, although his recent comeback has seen him lose two races in a row.

Expect Lobsta to secure a great position near the front. He may press Mr Phil, who competes in six- or six-and-a-half-furlong races more often than not. If he does not press Mr Phil, Lobsta can settle about two or three lengths off Mr Phil and whoever goes with him. Perhaps Whistling Birds from the rail can take up the dirty work and contest the lead.

Besides owning the versatility to secure a good position, Lobsta shows the right upward form and speed figures too. On TimeformUS, this is an improved colt compared to his slower races before the layoff last year.

Last December, Lobsta set the pace on his way to winning the New York Stallion Series Stakes at 28-1 with a 113 TimeformUS Speed Figure. At the beginning of the year, Lobsta then crossed the wire second by a head to the disqualified My Boy Tate in the Say Florida Sandy Stakes at Aqueduct with a 114.

In Lobsta’s most recent start, he chased Ny Traffic all the way around the track in the local Affirmed Success Stakes. Ny Traffic opened up on Lobsta to win by 3 3/4 lengths, which is fine considering Ny Traffic’s class advantage. For his runner-up effort, Lobsta earned a career-high 116 on TimeformUS.

None of the other entries besides Mr Phil show a higher TimeformUS figure than 116 this year. Yet, Lobsta offers the second-highest odds on the board.

Lobsta does love running seven furlongs, as his 3-2-0-1 record at the distance proves. At 8-1, it is worth seeing if Lobsta can pull a minor upset.

Chestertown deserves at least some consideration too.

In his three starts this year, which all came at Aqueduct, Chestertown ran fourth in the Say Florida Sandy Stakes, won a Feb. 3 optional claimer by four lengths and ended up second by 4 1/4 lengths in the Haynesfield Stakes.

If the pace heats up, the appeal in betting Chestertown is in his expected running style. From Post 7, he might settle slightly on the outside in a clear stalking or midpack position. He could easily move towards the lead if a speed duel occurs and the horses up front start fading in the stretch.

Note that Chestertown’s last win came on Feb. 3 in a seven-furlong optional claiming race at Aqueduct. Chestertown’s February win came with the help of Lasix, and he gets the addition of Lasix again in this spot as well.

Lobsta and Chestertown are useful in multi-race wagers.

At 5-1 or higher, they are both horses to consider placing a win bet, or win and place bet on. With that said, Lobsta is the preferred choice based on his improved speed figures lately and higher potential as a younger horse.