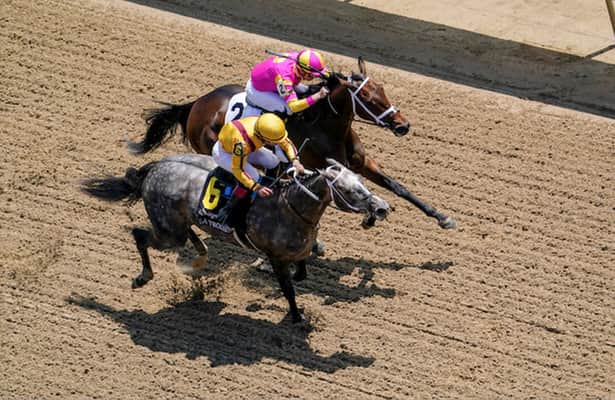 With Shedaresthedevil and Pauline’s Pearl expected to compete in the Grade 2, $350,000 Fleur de Lis Stakes at Churchill Downs on Saturday, the race offers intrigue because it puts together a rematch of the first two finishers of the La Troienne Stakes (G1) on the Kentucky Oaks undercard.

Before unloading on Shedaresthedevil or Pauline’s Pearl though, consider their recent losses and whether either of them hold any real advantage over the pending field. On paper, both runners offer questionable recent form.

From a value standpoint, Shedaresthedevil might get overbet again after losing her first two starts of 2022. She has not yet matched the efforts shown in her 2021 races, or even in 2020 when she won the Kentucky Oaks.

In her first start this year, Shedaresthedevil faded to third in the Azeri Stakes (G2) at Oaklawn after setting the pace. Ce Ce and Pauline’s Pearl gradually went by the mare in the stretch, and Ce Ce won by 3/4 of a length.

Sometimes speed horses fade, but there was no pace reason for Shedaresthedevil to give up the lead. She set modest opening fractions of 23.44, 47.53 and 1:12.20 for the 1 1/16-mile race and still surrendered the lead, which seems odd for a top female racehorse. She also set those early fractions while maintaining a valuable one-length cushion.

Then in the La Troienne Stakes (G1) on this course, Shedaresthedevil once again set the pace while uncontested through mild fractions of 24.02, 47.80 and 1:11.78. Throughout the modest pace, Shedaresthedevil again held a comfortable one-length cushion while Ava’s Grace chased along in second.

Shedaresthedevil gave up the lead for the second time this year. From the outside, Pauline’s Pearl gradually wore her down and won by half a length.

To Shedaresthedevil’s credit, she put up a fight when Ava’s Grace and Pauline’s Pearl came up alongside her on the far turn. However, for the second time in a row, she gave up the lead without any pace excuse.

Some readers hate pace figures, but take a look at Shedaresthedevil’s TimeformUS Pace Figures for those two races. In the Azeri, her first three pace figures were 106, 110 and 112. Then in the La Troienne, she ran a little faster in the early stages, with initial pace figures of 115, 119 and 118.

TimeformUS figures start to heat up around the 130 range. At 140 or above, the pace is definitely fast and earns the red label in most cases.

Shedaresthedevil had less of a layoff excuse in the La Troienne with the Azeri under her belt. Yet, she let Pauline’s Pearl outrun her again.

Perhaps Pauline’s Pearl has improved? Yes, that is possible.

As a 4-year-old filly, Pauline’s Pearl had the right to move forward. She started off the year with a bang by winning the Houston Ladies Classic (G3) by 3 3/4 lengths. Afterward came the runner-up finish to Ce Ce in the Azeri Stakes and huge win in the La Troienne over Shedaresthedevil.

In Pauline’s Pearl’s most recent start, though, she flattened to fourth in the Shawnee Stakes after making a threatening move on the far turn.

Pauline’s Pearl had every chance to pass Ava’s Grace and failed. As Pauline’s Pearl struggled, She’s All Wolfe rallied past all of them for the win. Ava’s Grade held second, while Army Wife switched inside and picked up third.

What happened? Pauline’s Pearl failed to hit the trifecta as the 2-5 favorite.

Not only did Pauline’s Pearl lose at very short odds, she put a further stain on the efforts of Shedaresthedevil in the Azeri and La Troienne. Shedaresthedevil was outrun twice by the fourth-place Shawnee finisher.

With those points in mind, Shedaresthedevil and Pauline’s Pearl are both vulnerable this weekend. If they both start in the Fleur de List this week as expected, look at both of them with skeptical eyes and demand some value.