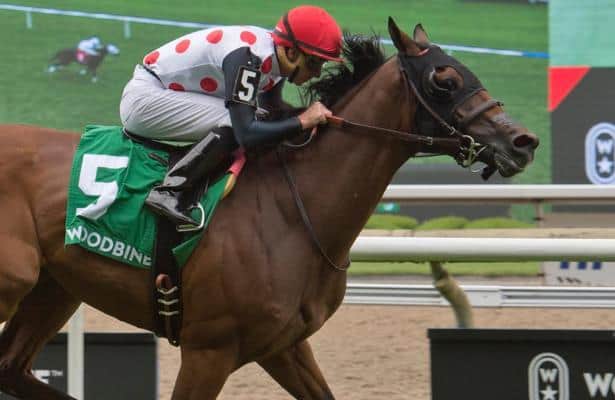 With the Breeders’ Cup at Del Mar in November looming, the stakes action will only get better at the major racetracks around the country.

Here is the analysis for each race and selections below.

More often than not, European invaders win this race.

With that in mind, it is hard to ignore Walton Street, who enters the Canadian International in good form after finishing third in the Grosser Preis von Berlin (G1) in Germany. The winner Alpinista was an established filly before the race with a recent win in the Lancashire Oaks (G2) at Haydock in July and also a second-place finish to the respected Love in the Yorkshire Oaks (G1) last August as a 3-year-old filly.

Earlier in the year, Walton Street won the Dubai City of Gold Stakes (G2) at Meydan, before finishing fourth in the Dubai Sheema Classic (G1) the same month. He lost to Mishriff by a little more than three lengths.

If Walton Street can transfer his form to Woodbine, he wins.

Two-time Canadian International winner Desert Encounter also deserves consideration, if only because he loves this course.

Even though this is a 9-year-old gelding at this point, he also enters in good form after finishing second to the talented 3-year-old filly Teona in the Sunningdale August Stakes at Windsor in August. In her next start, Teona won the Prix Vermeille (G1) just a few days ago.

Use the Euros and move on.

March to the Arch loves this course and merits top consideration on his record here alone. In last year’s Woodbine Mile, he ran a good second by one length to Starship Jubilee and also shows a consistent 5: 3-1-1 record at Woodbine overall.

His lone third-place finish at Woodbine came in his most recent start, when he was a closing third in the King Edward Stakes (G2). March to the Arch gets a pass for the loss, as the pacesetter Town Cruise held an uncontested lead and Olympic Runner had a closer initial position than March to the Arch and therefore had first run on the loose pacesetter.

The pace scenario in the Woodbine Mile is not great either for his closing style, but expect his trainer Mark Casse to crank this runner up for the big race. Maybe March to the Arch can sit closer to the pace rather than come from seven or eight lengths out.

March to the Arch is the top selection.

Raging Bull is also a logical horse to use in longer multi-race wagers based on his victory in the Maker’s Mark Mile (G1) earlier in the year and his past experience at Woodbine. In the 2019 edition of this race, he finished a troubled third via disqualification.

On the downside, Raging Bull also burns a ton of money because of the hype behind him. He lost at 3/5 in the Poker Stakes (G3), and he missed the board at even money in the Fourstardave Handicap (G1).

Do not overlook Space Traveller or Duke of Hazzard either.

Space Traveller was formerly based in Europe. In his North America debut, he made a good closing bid for fourth in the Mr. D Stakes (G1) at Arlington. He lost by 3 ½ lengths, which is significant on turf, but the effort remains noteworthy considering he had no pace in front early.

Sometimes the change in environment in North America moves European horses forward, and maybe the switch to Woodbine pushes this European ahead of Space Traveller and the rest of the field at a price.

Joyrunner might turn into the next star for trainer Laura Wohlers and owner James McIngvale, the former connections of sprint sensation Runhappy a few years ago.

In her second career start, Joyrunner won a maiden special weight at Indiana Grand by 8 1/4 lengths, while running in an awkward manner in the stretch run. For the winning effort, she posted a 90 TimeformUS Speed Figure, which is the third-highest in the field. If handicappers can find the video replay, it deserves a close watch.

Fans of Runhappy will remember his wild career debut at Turfway Park in 2014, about a year before he developed into arguably the top sprinter in the nation.

While she needs to prove herself stretching out to 1 1/16-miles, Joyrunner has the potential to handle a route distance as a daughter of Gun Runner out of Joy, who was a solid turf router that won over $250k in her career.

Even though there are mechanical kinks to work out, Joyrunner is the top choice.

If not Joyrunner, Hidden Connection also seems capable based on her career debut at Colonial Downs. She won by 7 1/2 lengths with a field-high 99 on TimeformUS.

Handling a two-turn route is also a question for Hidden Connection, as well as transferring her form from Colonial Downs to an A-tier track such as Churchill. For what it is worth, Hidden Connection’s dam, C Js Gal, is a full sister to C Js Awesome, who broke his maiden back in June 2014 in a 1 1/4-mile route on this same course.

For a longshot, also consider the rail filly Code for Success.

Code for Success only broke her maiden by one length at Ellis Park with a slow 74 on TimeformUS. But she might move forward on the stretch-out. Note the pedigree which shows Weekend Surprise (dam of A.P. Indy) on both the sire and dam sides. She is bred to run forever.

If Major General wants to succeed in the long term, he needs to sharpen up his way of running in the stretch run. For now, he might win the Iroquois on talent alone.

Major General beat Bourbon Heist at Saratoga on Aug. 21 while green and on the wrong lead, which makes his maiden win more impressive. Bourbon Heist had better mechanics and still gave a great effort while moving alongside Major General for the stretch battle, but he could not finish off the awkward-running colt.

Besides his raw talent, Major General also figures to offer some value, while Stellar Tap's odds might fall to 2-1 or less by post time because he carries more hype.

Stellar Tap can win too, although his odds are likely short.

On Aug. 7 at Saratoga, Stellar Tap broke his maiden by 5 1/4 lengths. As the side notes in the running line states, he won “with authority” while also earning a 109 TimeformUS Speed Figure. The 109 is the highest TimeformUS figure in the field.

If Stellar Tap repeats that effort at a mile and one-sixteenth, or even moves forward for trainer Steve Asmussen, he is a major contender. Ricardo Santana Jr. picks up the mount, which gives supporters a familiar combination to put their money behind.

Stellar Tap is listed as 3-1 on the morning line, but it is questionable whether 3-1 odds can hold. Expect his odds to dip to 2-1 or less.

Bourbon Heist is the third preference.

Yes, Bourbon Heist did lose to Major General while running smoother and switching leads correctly. What could change in this situation? For one, the extra distance may help Bourbon Heist. Also, Major General and Stellar Tap might get caught in a speed duel with one another and set the race up for a closer. The best closer lined up is Bourbon Heist.

On the negative side, Bourbon Heist did not draw well in Post 11.