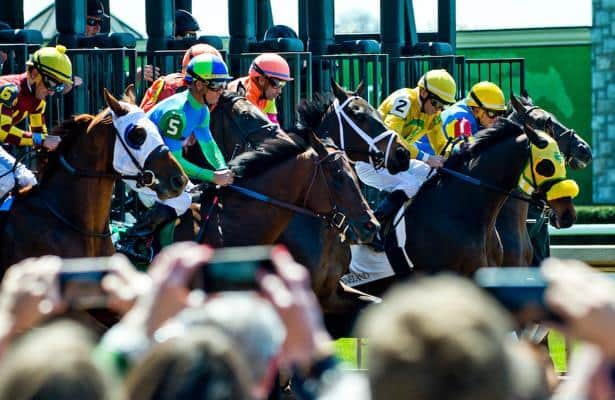 When Keeneland hosts the Grade 1, $500,000 Queen Elizabeth II Challenge Cup on Saturday, another challenging Pick 4 sequence surrounding the featured race awaits bettors. At least there is a $300k guaranteed pool for the wager though.

Here is one writer’s thoughts on the sequence.

Although Sovereign Appeal faded to third in her two recent one-mile races at Ellis Park, she also missed by only head in a local one-and-one-sixteenth mile maiden race last year. Her last three TimeformUS Speed Figures of 91, 85 and 86 are competitive numbers relative to this field.

With her early speed and consistency, Sovereign Appeal is the top selection.

Big City Momma made a decent move for second in her most recent start on Sept. 26 in a Belmont maiden race. While she lost by 11 ¾ lengths to Shalimar Gardens, she still put three lengths on the third-place Violent Vixen and earned an 83 on TimeformUS. As a 3-year-old filly, she has a right to improve further.

Street Missy was a distant third by 12 lengths over slop in her most recent start on Sept. 19 at Churchill Downs. Despite the distant third-place finish though, she still earned a field-high 95 on TimeformUS.

Berate lost by 20 ¼ lengths in her career debut on Sept. 4 at Ellis Park, but she also broke poorly and gave up several lengths.

Given Shantisara’s three-length win in the Pucker Up Stakes (G3) at Arlington as well, the turnback to nine furlongs is not a problem.

Technical Analysis won the Lake Placid Stakes (G2) at Saratoga by 3 ½ lengths in her most recent start. In July, she also won the Lake George Stakes (G3) by 1 ¼ lengths. While nine furlongs remains a question given her sixth-place finish in the Wonder Again Stakes (G3), she deserves another chance.

Perhaps Pick 4 bettors can get away with just covering those two runners, as the latter two legs in the sequence remain wide open handicapping affairs.

If scratches in the other legs free up some money, then also consider including the two Europeans Empress Josephine and Nicest. The latter filly offers value at 10-1.

Winter Pool deserves top consideration because he enters in good form for trainer Chad Brown with two wins and two seconds in his last four starts.

On the negative side, one of those wins came in a maiden claiming race at Churchill Downs, while the other one came in a Saratoga starter allowance. Regardless, this is not the strongest group of allowance-level runners.

If the pace heats up as expected, Winter Pool is going to contend late.

If the pace does not heat up, then Ducale is the one to beat.

In his most recent start on Sept. 4 at Saratoga, Ducale faded to a distant third while Baby Yoda dominated the field by 4 ¼ lengths with an amazing 114 Beyer Speed Figure and 126 TimeformUS Speed Figure. For Ducale’s losing third-place effort, he posted a respectable 116 on TimeformUS.

Two starts ago at Saratoga, Ducale made use of his tactical speed to stalk and take over in the stretch. He broke his maiden by two lengths, which proves himself capable of not leading if the situation calls for it.

Trashtalkinyankee was second in his most recent start in an Ellis Park allowance race on Sept. 4. He contested the pace before giving way to Atoka in the stretch to lose by three lengths with a 100 on TimeformUS.

At Churchill Downs on June 20, Trashtalkinyankee also posted a 105 on TimeformUS when finishing second to Happymac in another allowance race. The 105 TimeformUS Speed Figure is competitive in this group.

Malibu Star has a chance as well if he can run back to his 109 on TimeformUS when second in an Aqueduct allowance race in February.

According to TimeformUS Pace Projector, a fast pace is brewing.

The midpack runner Social Chatter owns two wins and one second in three turf starts. Those two turf wins came in a five-and-a-half furlong maiden race at Ellis Park and a seven-furlong allowance at Kentucky Downs, which proves she does not require a specific turf course.

Another plus is that Rafael Bejarano is a fine turf rider.

Social Chatter is the top choice.

Signify shows one turf win and two seconds in three tries. Her win came on Aug. 29 in a five-and-a-half furlong turf allowance race at Ellis Park, while the two seconds were at Indiana Grand at five furlongs.

How about Recoded? In Recoded’s most recent turf start, she closed well in a seven-furlong optional claiming race at Kentucky Downs. After taking the lead, Recoded lost by a neck to Star Command. Perhaps cutting back in distance will help her.

Sara Sea faded to eighth after setting the pace in the one-mile Kentucky Downs Ladies Turf Stakes (G3). Cross the route effort out.

Two starts ago, Sara Sea made a mild move for fourth in the Preview Ladies Turf Sprint at Ellis Park. She also shows a runner-up finish in a five-and-a-half furlong optional claiming turf race at Churchill Downs on May 15.

Trainer D. Wayne Lukas is not a good trainer to bet on overall, but once in a while he lights up the board and surprises bettors with a longshot who fires.