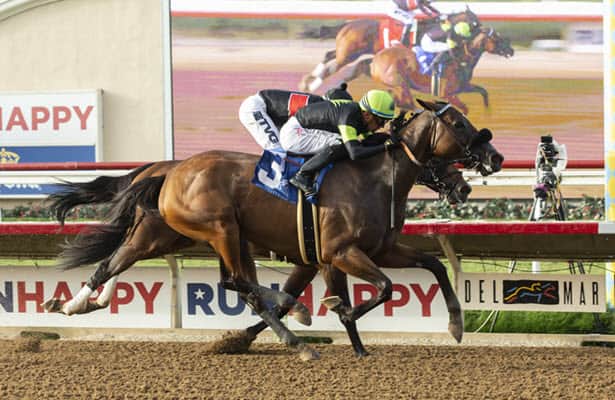 Following three Kentucky Derby points races on New Year’s Day, the second Saturday of the year oddly features no Derby-related stakes races. Regardless, there is the Grade 2, $200,000 Santa Ynez Stakes at Santa Anita, which is a seven-furlong Kentucky Oaks prep race worth 10 points to the winner.

Plus, Oaklawn runs the $150,000 Pippin Stakes for older fillies and mares.

The Pippin and Santa Ynez will be discussed below, as well as two other Oaklawn races to cover a late pick 3.

If El Potente manages to draw in, then he is probably the best horse.

In his second career start, El Potente displayed tactical speed at Del Mar in a $50k claiming race before tiring in the stretch to fourth by 10 ¼ lengths. Now he stretches out and drops slightly in class at a different circuit. The route question is fair after his fade last time, but this is not a strong field.

For a longshot, consider Magoo.

He contested the pace in a $150k maiden claiming race at Keeneland before fading in the stretch to a well-beaten 11th. Stretching out to a route, Magoo might get to secure the lead more easily and relax up front. On paper, there are no crazy speed types present. He also gets added Lasix to help him out.

Lake Tahoe might not settle too far behind Magoo. Even though Lake Tahoe has faded out of the trifecta in his three career starts in maiden special weights, he deserves another look because this is his debut in a claimer.

Also making his debut in a maiden claimer is Full On, a Union Rags colt whose second dam Chief Secretary is a half-sister to Exchange Rate. Trainer D. Wayne Lukas does not win often, but once in a while he can pop one.

Miss Bigly holds the class edge in this field after finishing third in the Chilukki Stakes (G3) and third in the Zenyatta Stakes (G1).

The Chilukki Stakes winner Obligatory won the Eight Belles Stakes (G2) earlier in the year and also ran second in both the Acorn Stakes (G1) and Cotillion Stakes (G1). Miss Bigly only lost to Obligatory by 2 ½ lengths.

Zenyatta Stakes runner-up As Time Goes By faded badly in the Breeders’ Cup Distaff after the pace collapsed, but in recent times she went on to capture the Bayakoa Stakes (G3) and La Canada Stakes (G3). Miss Bigly only lost second to As Time Goes By in the Zenyatta by 2 ¼ lengths.

Perhaps Coach is Miss Bigly’s main rival in the Pippin after winning her local return race in an optional claimer last month by two lengths. Last year, Coach ran second in the Martha Washington Stakes and third in the Fantasy Stakes (G3), which were both on this course. But those two races were against weak competition, and Coach ended up ninth in the Kentucky Oaks.

On paper, it does not look like Miss Bigly faces any horse on the level of Obligatory or As Time Goes By in this spot. Miss Bigly is the single.

Miacomet might steal this race. He contested a fast pace in a local Dec. 11 allowance race before fading slightly late to fifth. The notable part is that his two initial TimeformUS Pace Figures shown for that race are 155 and 158, which are huge numbers on that scale. If the pace is moderate, watch out.

Runnin’ Ray ran second by 1 ½ lengths to Happy American two starts ago in an Oct. 2 allowance race at Churchill Downs. In his most recent start, Happy American lost the Tenacious Stakes at Fair Grounds by a nose to Chess Chief. Happy American also won an optional claimer in between those races.

Although Runnin’ Ray only could finish third on Nov. 17 in a Churchill Downs allowance race, he might deserve a pass because of the slow pace. The effort shown against Happy American can win in this spot.

Koolhaus makes his return after 224 days for trainer Brad Cox, who is always hard to ignore when betting. The 110 TimeformUS Speed Figure for breaking his maiden last May looks good enough to win this race.

Continental Coins also gets some credit for chasing the fast pace partially set by Miacomet on Dec. 11. He might receive a great outside stalking position.

Carillo lost an allowance race at Churchill Downs on Nov. 24 by a head after traffic problems and a wide trip cost him. He can rebound in this spot.

The race comes down to Under the Stars, Big Switch and Awake at Midnyte.

Odds and value aside, there is no real advantage shown by any of those three fillies. Under the Stars does own the high TimeformUS Speed Figure for breaking her maiden on Dec. 11 at Los Alamitos with a solid 99. However, Big Switch is not far behind with a 95 and Awake at Midnyte shows a 92 on grass. With young horses, it is not a good idea to emphasize figures.

Under the Stars is 8/5 in the morning line, and she is liable to drop down further because of her popular and controversial trainer Bob Baffert.

Big Switch is second choice on the morning line at 9/5. Given the popularity of trainer John Sadler in California and jockey John Velazquez taking the call, she is likely to remain at 9/5 during live wagering.

The value is Awake at Midnyte at 3-1. After breaking her maiden at Santa Anita on Oct. 31 over Under the Stars in third, Awake at Midnyte experimented on turf with a runner-up finish in the Jimmy Durante Stakes (G3). She only lost by a nose.

Given she owns graded stakes experience (albeit, on turf) and already beat Under the Stars, Awake at Midnyte is a viable option here for win bettors at a decent price.