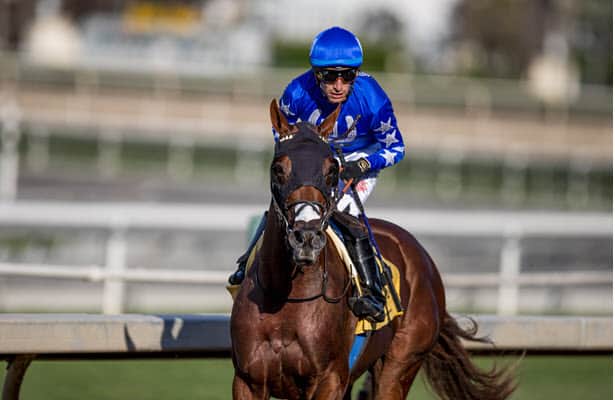 With four stakes races for 3-year-olds aspiring to make the Kentucky Derby on Saturday, it could become easy to fall behind in handicapping.

For readers who need ideas, here are selections and bets for the $250,000 Smarty Jones Stakes at Oaklawn and $150,000 Mucho Macho Man Stakes at Gulfstream, plus a summary of earlier posts covering the $150,000 Jerome Stakes at Aqueduct and Grade 3, $100,000 Sham Stakes at Santa Anita.

The progression of Barber Road has been excellent. After losing by 12 ¼ lengths to Tejano Twist last August at Colonial Downs, Barber Road broke his maiden by 3 ¾ lengths in a $30k claimer at Keeneland, won a starter allowance at Churchill Downs by 6 ¼ lengths and ran second by half a length in the Lively Shively Stakes to Tejano Twist with a 101 on TimeformUS.

Tejano Twist went on to finish second in the Gun Runner Stakes in his next start with a 100 TimeformUS Speed Figure. He is a talented sprinter.

Based on his runner-up effort to the fast Tejano Twist, Barber Road is the first preference, but Cool Papa G also deserves credit for his closing move in the Lively Shively. After settling in fifth and six lengths behind, Cool Papa G made up steady ground to finish third by 2 ¼ lengths.

All in Sync's dam line traces back to the legendary Personal Ensign, which means the stretchout to one mile is not supposed to hamper him.

This six-horse field is comprised of mostly local Gulfstream horses from the past few months, which makes the overall quality of this field questionable.

The one outsider is Graphic Detail, who broke his maiden at first asking in a six-furlong Belmont maiden race on Nov. 6. From watching the replay, Graphic Detail had plenty of work left at the top of the stretch before mowing down Triple Elvis late to eventually prevail by half a length.

Based on the bottom-half of his pedigree, Graphic Detail is supposed to handle the stretchout. His second dam Jaramar Rain won five times in a 23-race career. All five wins came in routes, and she won up to nine furlongs.

Consider singling Graphic Detail. This is not a strong field.

Hagler broke his maiden by 4 ½ lengths in his second career start. He did not beat the strongest field, although the sixth-place Perfect Flight went on to finish second by a neck to Courvoisier in a Dec. 2 Aqueduct maiden race.

For the win, Hagler earned a 103 TimeformUS Speed Figure. No other horse in this field has even reached 100 on TimeformUS in a dirt race.

What about the figure regression in his next start?

Hagler competed in a local optional claimer on Dec. 16 and used his speed to win by 1 ¼ lengths with only a 79 on TimeformUS this time.

As written before on here, sometimes speed figures are difficult to use as measurements of ability when the pace is slow. In this case, Hagler set fractions of 24.40, 48.79 and 1:13.50 for the seven-furlong race.

Expect Hagler to bounce back to his maiden figure. He is the horse to single, although use some caution if the track ends up messy because of rain.

For the second slot in exactas and trifectas, use Cooke Creek, Courvoisier and Mr Jefferson.

Mackinnon has established himself as a nice turf horse in his age group after a closing third-place finish in the Breeders’ Cup Juvenile Turf and earlier wins in the Zuma Beach Stakes and Del Mar Juvenile Turf Stakes.

Can he transfer the form to dirt?

He only ran fourth in his career debut on dirt last May. But, the non-threatening effort is forgivable because he made his first start and the 4 ½-furlong distance was too short. His recent workouts look great, as he passes his workmate over the training track on Dec. 6 and Dec. 19 easily.

Trainer Bob Baffert’s two entries do not look like monsters at first glance, which makes this a good time to take a chance on this turf-to-dirt entry.

If any Baffert entry is used though, then go with Newgrange.

The son of Violence broke his maiden at first asking on Nov. 28 at Del Mar in a six-furlong sprint. The 1 ½-length margin does not seem impressive at first glance, but he won under a handride with a solid 105 on TimeformUS. Remember that Baffert does not crank his horses in their first career starts. Newgrange is probable to take a step forward.

For a longshot, also think about using Degree of Risk. Although this four-time stakes-placed son of Cairo Prince lacks any dirt experience, his overall pedigree indicates he should make a successful switch.

Remember the 10-1 upset from Out of Bounds in 2012? A similar result might happen for Eoin Harty, especially with no monsters lined up.