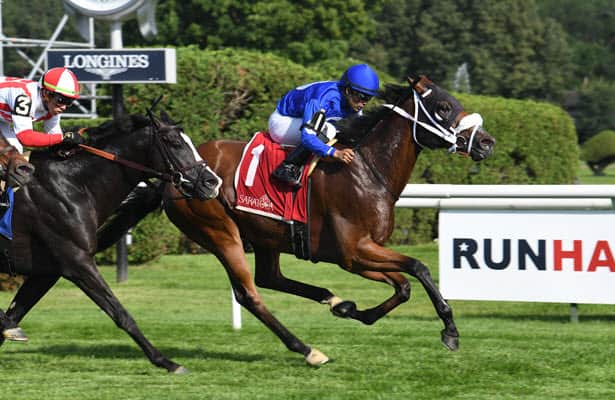 Although Breeders’ Cup week is over, the racing season never ends. Bettors can look forward to at least three six-figure stakes races across the country.

Here are selections for those three races.

Rinaldi loves setting the pace and winning at Saratoga. Four of his five wins came over at the Spa, while his lone non-Saratoga win came in the 2019 New York Stallion Series at Belmont. However, he is no slouch at Aqueduct either with one runner-up finish and one close fourth in listed stakes races.

In this race, Rinaldi enters at 6-1 on the morning line with no other true pacesetters to deal with. There are horses with good tactical speed, such as Tell Your Daddy and Field Pass, but in one-mile races Rinaldi is faster in the opening quarter.

Given the chance of a lone lead and value from his expected odds, Rinaldi is the choice. Even though Rinaldi has set the pace and lost before when competing outside of Saratoga, his 6-1 odds gives bettors incentive to bet on him. He did break his maiden over at Belmont.

Watch the odds. If he dips to 7/2 or lower, then think twice about it.

While the morning line odds on those runners might sound unappealing at 7/5 and 9/5, there is one mare at 4-1 who can also win this race.

The mare’s name is Club Car. One month ago, Club Car finished second in the Thoroughbred Club of America Stakes (G2) at Keeneland on Oct. 18. Even though Club Car failed to catch the winner, there is a good argument she was going to win without traffic problems blocking her.

From watching the replay, Club Car ran behind traffic for most of the race.

By the time Club Car tips out in the stretch, Bell’s the One took the lead.

Club Car made one last thrust forward towards the wire, but she came too late. Bell’s the One had the jump and won by a neck over Club Car.

Given Club Car’s traffic problems in the TCA, there was no difference between Bell’s the One’s effort and Club Car’s runner-up finish. Club Car gave the impression of a runner with the same exact ability as her.

In addition to Bell’s the One, Club Car also needs to face Sconsin as well. Almost nothing separates Bell’s the One and Sconsin either. Bell’s the One lost to Sconsin in the Open Mind, but she also beat Sconsin by ¾ of a length in the local Roxelana Stakes earlier in the year.

If Club Car is capable of matching Bell’s the One, then the same holds true for Sconsin. She only needs a clean trip in order to defeat both of them. The switch to Joel Rosario also gives Club Car a better chance.

This is not a great betting race. Regardless, the winner on paper looks like Eda, who cut back successfully in the Anoakia Stakes at Santa Anita.

Eda typically runs as a presser or tracker, but she faces a soft pace scenario this time where she projects to take an uncontested lead. This kind of situation typically puts good speed horses in the winner’s circle, especially ones trained by Bob Baffert. The only problem is that Eda’s odds are 3/5.

Under the Stars is one filly that can beat Eda on the slight stretchout. This is a half-sister to Bodemeister, the 2012 Kentucky Derby and Preakness runner-up. Right now, Under the Stars is still a maiden after a closing third-place finish in her career debut at Santa Anita on Oct. 31.

Is 6 ½ furlongs long enough for Under the Stars? In the long run, she might want a route distance. For now, the extra half-furlong might prove helpful.

However, Under the Stars is trained by Baffert too and does not offer great value either at 5/2 on the morning line. Given the famous trainer and blueblood pedigree, her odds might go even lower.

None of the other runners in this short field are intriguing enough to consider. Therefore, bettors might want to avoid this race from a win bet or exacta standpoint.